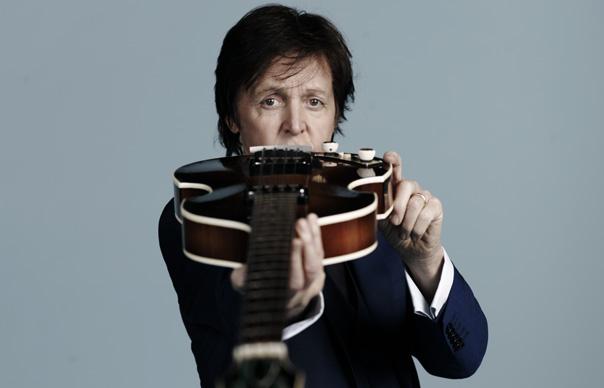 As the closest thing Britain has a national minstrel, someone whose reach spans more than a couple of generations, it was only right that Paul McCartney topped the bill at last year’s two great public entertainments, the Queen’s diamond jubilee concert in the Mall and Danny Boyle’s Olympic opening ceremony. But those performances, in which that familiar voice struggled for traction on the upper slopes of his much-loved melodies, were not the sort of thing that you would want to put forward in evidence while trying to convince much younger people of his significance, let alone his continuing relevance.

So New is an interesting statement, starting with the choice of its title, borrowed from one of its tracks (the first single) and surely hoping to convey a sense of continued forward movement, maybe even of rebirth. After 2012’s Kisses On The Bottom, in which he indulged his affection for the popular songs of his parents’ generation under the supervision of the veteran jazz-oriented producer Tommy LiPuma, now McCartney puts himself in the hands of the music-shapers of the 21st century, working with four younger producers: Paul Epworth (three tracks), Ethan Johns (two), Mark Ronson (two) and Giles Martin, whose name is on six tracks but who is also credited as executive producer of the whole collection.

This isn’t necessarily an ideal recipe for coherence, but Martin – the producer of the music for Love, Cirque du Soleil’s Beatles show, and for the Rock Band video game – keeps it under control. His guiding hand allows New to follow the path pioneered under his father’s supervision by Revolver, Sgt Pepper, and the White Album, with each song treated as an individual entity and allocated its own musical resources, from the muffled tom-toms and Mellotron flutes of “Alligator” to the Mighty Wurlitzer intro and underwater interlude of “Queenie Eye”.

The individual producers are allowed their signature touches, and sometimes the musical solution is an obvious one. The jaunty stride of the title track, for instance, recalls that of “Got to Get You into My Life”, and Ronson gives it an appropriate retro-soul horn arrangement, with joyous vocal harmonies. After a sudden clatter of drums, the pay-off comes with a brief but glorious choir-and-horns coda, like the Beach Boys bumping into the Grimethorpe Colliery Band.

That’s one of the album’s five outstanding tracks, two of which pay a different sort of homage to the past. “On My Way to Work” is a piece of observation from the top deck of a bus, in the style of “Penny Lane”, with a jug-band setting: “On my way to work I bought a magazine / Inside a pretty girl liked to water-ski / She came from Chichester to study history / She had removed her clothes for the likes of me.” Had this been a Beatles album in 1965, the song would have made a great and slightly risqué cover for Herman’s Hermits.

More explicit in its retrospection is “Early Days”, a singer-songwriterish ballad through which Paul, his voice suitably weatherbeaten, tries to reclaim his past. He describes two boys with guitars walking the city streets before the reverie turns to mild, rather weary recrimination: “Now everybody seems to have their own opinion / On who did this and who did that / But as for me I don’t see how they can remember / When they weren’t where it was at / They can’t take it from me if they try / I lived through those early days.”

The one that lodged itself firmly in my head after three or four plays was “Looking At Her”, a great song of unrequited love. Once again the Beach Boys are evoked and it’s a considerable compliment to suggest that this is just the sort of song Brian Wilson might have written after being knocked sideways by Rubber Soul.

But McCartney has always been equally good at requited love, and it’s probably not taking too many liberties to suggest that his own current state of domestic bliss is the inspiration for “Scared”, the “hidden” track, an unadorned ballad whose unexpected and graceful melodic lift at the end of each verse reminds you who this is, and what he can still do when he puts his mind to it.
Richard Williams

Q+A
GILES MARTIN
You’ve known Paul McCartney all your life. Was he like an extra uncle?
I wouldn’t go that far. I wasn’t sitting on his knee or anything like that. But when I was about 12, I wanted to do music and my parents weren’t very keen on the idea. Paul said to me, ‘I’ve heard you’ve been writing some music.’ I said, ‘Yes, I have.’ He said, ‘That’s really great – but I want to tell you that it’s not easy. Sometimes I find it really difficult. But stick at it.’ I always remember that. He’s generally very enthusiasic about what people from younger generations are up to.

Was it difficult to collaborate with someone who knew you when you were a child?
I was nervous. I’d always liked him and he’d always been very kind to me, but I thought it might be different if I became his producer, because you have to say stuff. One day he did a live take of a bass part, and there was a mistake in the verse. I thought, ‘Well, you’re probably going to get fired, but you might as well tell him.’ My dad’s always told me that you’re being paid for your opinion, so there’s no point in just saying, ‘Oh my God that’s brilliant.’

He’s spent 50 years in studios – why doesn’t he do just it himself?
I know that he likes to perform, and if you’re performing it’s difficult to listen at the same time. It wasn’t a question of, ‘Oh, let’s get some young producers who’ll make me sound cool.’ If he doesn’t like the direction it’s going in, he’ll do something about it. It’s his record. I think it’s his best for years, but I would say that.
INTERVIEW: RICHARD WILLIAMS