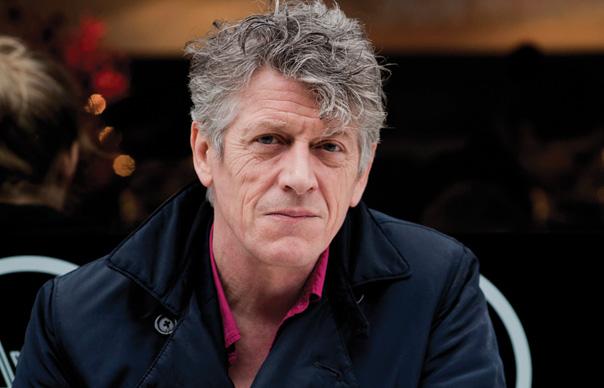 Talking to Graeme Thomson in 2006, Paul Buchanan discussed the ordinary miracle of music: “Being able to listen to music and being able to talk to each other through music is like being able to walk on air. It saddens me that music has just turned into a loss-leader in a supermarket. It’s like a miracle that has been turned into a marketing factor. I’m dumbfounded. Every record should be compared to silence – silence is perfect, what are you going to put on it?”

For his first record in eight years, the first solo record of his career – that is, if you discount the suggestion that The Blue Nile effectively became a solo project some time in the mid-’90s – Buchanan pushes the pop song to the very brink of that perfect silence.

Mid Air is a collection of 13 ballads and an instrumental, recorded at some 3am of the soul, in the cell in the tower of song a few storeys above where Leonard Cohen is eternally recording Songs From A Room, Sinatra is composing “Where Are You?” and Tom Waits is working on Small Change. It barely rises above murmur and sigh, the clang of the night-train, the chime of the city clock, the foghorn from the docks.

It’s also, it almost goes without saying, magnificent. Even the most devout Nileists had to concede that Peace At Last (1996) and High (2004) had their longueurs. But here is a record that in its determinedly modest way – Buchanan describes it as a “record-ette” and apparently toyed with titling it “Minor Poets Of The Seventeenth Century” – matches their immaculate ’80s albums A Walk Across The Rooftops and Hats. It’s no great departure; it’s more like a refinement or elaboration of latent possibilities in the earlier music. In a way, Mid Air revisits the deep, still pool of Rooftops’ “Easter Parade” and explores the musical and emotional space as though it were a new ocean.

“Easter Parade”, in fact, always felt like the first draft of an ideal Blue Nile torch song, one that Buchanan pursued keenly down the years, across the classic early B-side “Regret” (“It’s 3.30 and I’m thinking of you…”) , Hats’ “From A Late Night Train” and Peace At Last’s “Family Life”.

Mid Air amounts to 14 enigmatic variations on this mood, just piano, voice, the occasional pale moonbeam of orchestration, which miraculously never feels monotonous or morose. This is partly due to the songs’ brevity (none lasts more than three minutes) and the spare neon-haiku imagism of Buchanan’s words. The title track lists “the buttons on your collar, the colour of your hair”, like the ingredients in a spell to conjure someone’s presence, while “Wedding Party” is not much more than a handful of snapshots – “tears in the carpark”, “a long walk in the wrong dress”, “I was drunk when I danced with the bride” – that seem to condense lifetimes of regret. But it’s also down to Buchanan’s peerlessly evocative croon. From a country known for its bluster and bravado (from the sublime – Billy Mackenzie – to the ridiculous – Jim Kerr), Buchanan signifies heartsick soul-storms with little more than the muttered, broken “yeah…” that closes the final song, “After Dark”.

Indeed you’d suggest that he’s Scotland’s greatest living singer, except, as he avers on “My True Country”, he’s really a patriot of that dream nation “far beyond the chimney tops… where the bus don’t stop”. There’s a conscious echo there of the tinseltown rooftops of his debut, and though it’s been suggested that this album is in part a work of mourning for a friend, you can’t help but hear it is a dirge for his old band. If you’ve read Allan Brown’s touching 2010 biography, Nileism, you’ll be familiar with the baffling way in which the band, schoolmates, university friends, all still living in the same square mile of Glasgow, have gradually grown inexplicably estranged. Though you pray that it’s proved to be premature, the band couldn’t hope for a better epitaph than Mid Air.
Stephen Troussé

Q&A
Paul Buchanan
Are you pursuing some ideal song on Mid Air? Are you getting closer?
That’s a good question. Partly yes, partly no. “Easter Parade” got very close. But part of what was relaxing about this record was not thinking. You’re always playing with the same circle and trying different things. I was re-reading George Martin’s Summer Of Love… recently and I came across that Lennon quote again – that he only wrote two real songs, “Help!” and “Strawberry Fields Forever”. You might disagree, but you understand what he meant.

You said a few years ago that you aspired to write songs of ludicrous optimism. Are you saving them for the next album?
Very good! I am saving them for the next album, yeah! Our first single, “I Love This Life”, was the starting point. Without sounding like The Odyssey, it’d be nice to conclude with the same ludicrous optimism. The only difference being, you have idealism and maybe you lose it, but it doesnt mean you can’t weigh up experience and decide to be ludicrously optimistic, despite all the evidence to the contrary. I don’t know if we’ll make another record, but that’d be a good place to go to. There’s a wilful innocence to Mid Air that’s at least some of the way back to that.
INTERVIEW: STEPHEN TROUSSÉ