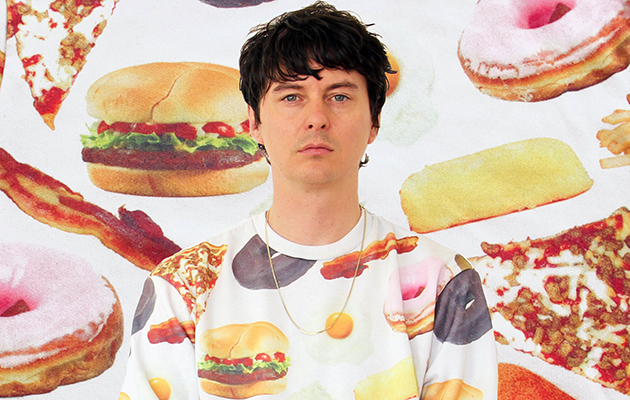 From folk, via drugs and jazz, to somewhere considerably weirder. The journey made by Animal Collective – with a bit less jazz and a lot more synthesizers – isn’t completely unlike that made by The Byrds in the middle 1960s. In that context, there’s a case to be made for Panda Bear – 35 year old Noah Lennox – as Animal Collective’s David Crosby. This is a man as yet without a cape, yacht or moustache, but there remain some powerful similarities: namely, a feel for the vibrations in a harmonious world, and of the visionary possibilities of the human voice.

In that respect, Panda Bear Vs The Grim Reaper, his fifth album, isn’t dissimilar to his work with Animal Collective or his own previous solo work, particularly 2007’s excellent Person Pitch or 2011’s Tomboy. A standout Lennox song, like “My Girls” from Animal Collective’s Merriweather Post Pavilion is a symphony of digital sequencing, ecstatic singing, and heartfelt sentiment: the song is about wanting to provide a house for his young family. Whether it fronts abstract folk strumming, or slick post-disco grooving (he was among the featured singers on Daft Punk’s Random Access Memories album of 2013) he’s the kind of singer whose voice you instinctively trust.

It’s a resource that brings continuity to a fifth album touching on greed, death and – more often than you might imagine – dogs; and moves between reference points as remote as the Prodigy, Howard Jones, the Beach Boys and 1960s girl group pop. At times it’s a wonderfully playful album. After the opening  “Sequential Circuits”, a fanfare of melancholic chording, we face the mighty single “Mr Noah”, where over churning beats, Lennox declaims a minimal text turning the words “That dog got bit on the leg” into a euphoric exhortation.

Like a mantra, and like Crosby, Panda Bear can make a little go a long way, revisiting a word or a short phrase, and taking it somewhere quite beyond its origin. On the lovely “Come To Your Senses”, a stirring and beautiful song about a learning experience, and not making the same mistakes repeatedly, he opens the song with a repeated question, “Are you mad?”, which grows by his treatment into something of considerably greater impact than it might appear baldly on the page.

True enough, Panda Bear is no longer completely alone in exploring the possibilities of raw electronica and the human voice, as good gallery rave records in the past couple of years by Maria Minerva, Holly Herndon and Laurel Halo will surely testify. Still, his work is possibly the most interesting as a collision point between hippy music old and new. Vs The Grim Reaper has room for pro-human peace riffing (“Selfish Gene” comes over like Withnail and I with its talk about a “total shift in the unconscious” and how wigs, and “making noise not songs” just “ain’t it”). Likewise, the restless detail of “Sequential Circuits” or “Butcher Baker Candlestick Maker” moves the game on from the crusty didgeridoo vibing of Megadog era techno.

For all its being named like a cartoon strip/Scientist dub album, however, there’s reason to suppose that the death alluded to in the title is often a real issue here. In the last two thirds of the album “Tropic Of Cancer” is followed by “Lonely Wanderer”. Both are sung in the remote and melancholic voice that has been heard echoing through timeless soda fountain dramas from Phil Spector girl group productions, through the Beach Boys, and even the Ramones.

Here, though, it tackles death, beginning with an electronic last post, and being accompanied by heavenly harps. The tune reaches something like the vulnerability of the Beach Boys’ “In My Room”, a fragile epic, which concludes “You won’t come back/You can’t come back…” a choir of Panda Bears sorrowfully answering each other. “Lonely Wanderer” then asks a kind of post-mortem life review/customer satisfaction questionnaire. “If you look back,” it asks in the same vulnerable voice. “Was it worthwhile….”

This is the big ask behind Panda Bear’s ecstasies, the yawping carpe diem of his music. As much as this resists being pigeonholed as a concept album, you can’t deny the power of the closing “Acid Wash”. The song declaims images of natural beauty in joyful voices reminiscent of the Proclaimers, and rises to a victorious electronic crescendo, announcing finally “You’ve won against the dark”. Was it worthwhile? Panda Bear has surely answered his own question.

What comes first with you – your vocal melodies, or developing the track? Or is it all a bit more complex/evolving than that?

It depends on the set of songs but this round all the songs save two (the two floaty ones towards the end of the album) began as rhythms. as i developed the sounds and pieced together the framework of the rhythms over several months the singing parts materialized kind of like a polaroid picture oozes into focus. the words came last.

What did Sonic Boom/Pete Kember bring to the project? How do his ideas chime with yours?

Pete and I tend to hear things in different ways and our skill sets are varied in ways that complement each other. many of the intros are his alone although I’d often have an image or a movement in mind. He’s very good at finding the points at which sounds coalesce and has a keen ear for balance.

Was there anything about the experience of working with Daft Punk last year that fed into how you approached this record?

The track with Daft Punk was made while i was in the thick of these songs and perhaps more than anything felt like proof of concept. Making a track with them was a dream come true and a wave of inspiration for me.