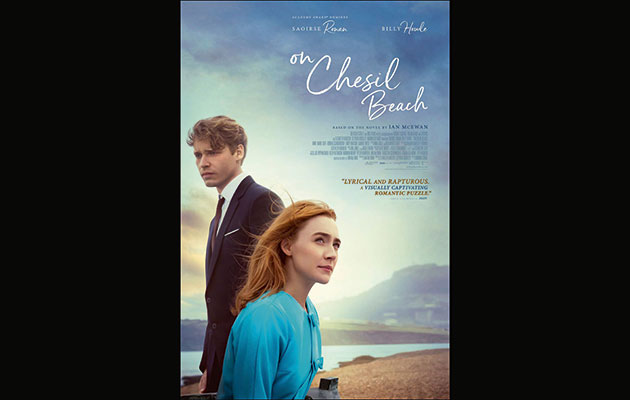 Adapted from Ian McEwan’s Booker nominated novel, On Chesil Beach opens in 1962 on the wedding night of young university graduates Florence and Edward. As Larkin noted, they are a year out – and much of McEwan’s story pivots around that one excruciating night which takes place at a seaside hotel in Dorset’s Chesil Beach. The film (which the author also adapted) is evocative of that grey hinterland before the conservativism of the 1950s was swept away by the technicolour of the Sixties – “Between the end of the ‘Chatterley’ ban / And the Beatles’ first LP”. There are the sniggering waiters that attend Florence and Edward at their ghastly hotel, and in flashback we get the measure of Florence’s prim upbringing versus Edward’s more progressive family (another Larkin verse springs to mind here, about parents, from “This Be The Verse”).

Being a McEwan joint, there are plenty of flashbacks, telescoping in and out of Florence and Edward’s lives before they met each other. What emerges is a portrait of two bright, likeable people coming together during a period that had yet to really get a handle on either sex or relationships. Although their situation is evidently not unique, McEwan’s gift for truffling out poetry in bleakness and art from cruelty is never far away. Saorise Ronan is a returning McEwan veteran (she made her film debut in Atonement) and she brings warmth and lightness of touch to Florence, despite her repressive background while the compassionate Edward (Billy Howle) has his own troubled backstory. Mercifully not as cruel as some of McEwan’s work, On Chesil Beach offers accessible, hardback quality.