Sheff and co's best yet 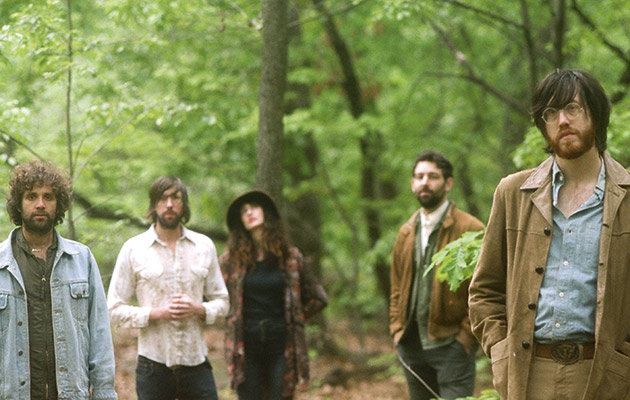 According to Will Sheff, the songs on Away tell a kind of “death story”. Since he wrote them, he presumably knows what he’s talking about. But even if two of its finest songs are about the perishing end of things, including Will’s own band on misty requiem, “Okkervil River RIP”, Away isn’t an album about death in the manner of dark and fatalistic early OR albums like Don’t Fall In Love With Everyone You Meet (2002) and Rivers Of Golden Dreams (2003) with their gory murder ballads and songs about dead dogs. Nor is it eventually much in the morbid cast of 2005’s Black Sheep Boy, Sheff’s gloomy suite of songs about self-destructive ’60s singer-songwriter Tim Hardin.

Better to think of Away, really, as an album about letting go – of the past, people and places you’ve known and loved, the career that hasn’t taken you as far as you thought it would, the someone you thought by now you’d become and have not – as a prelude to rebirth and renewal, sometimes euphoric. It may be OR’s best album yet, even if it doesn’t much sound like the albums immediately preceding it. I Am Very Far (2011) and The Silver Gymnasium (2013) were big, bold rock records that bored into musical seams reminiscent of Bowie and Springsteen, Sheff on parts of The Silver Gymnasium finding the place where “Young Americans” meets “Born To Run”.

Recorded in three days with musicians culled from New York’s jazz and avant-garde music scenes, with orchestral arrangements by composer Nathan Thatcher, played by the yMusic classical ensemble, Away is more decoratively subdued. The album visits unhappy places, but its reflective musical poise puts it closer to On The Beach, say, than Tonight’s The Night, whose “horrible sloppy wrongness” and harrowing urgencies were such an influence on the Hardin song-cycle. The lovely, introspective drift and implorations of songs like “Call Yourself Renee”, “She Would Look For Me” and “Mary On A Wave” recall the slow unfoldings and ruminative narrative shifts of “Motion Pictures” and “Ambulance Blues”, songs written by Neil Young at a time of similar grave personal and professional reassessment. The skittering “Days Spent Floating (In The Halfbetween)”, meanwhile, may make you think of Tim Buckley’s “Love From Room 109 At The Islander (On Pacific Coast Highway)” or the nomadic extemporisations of San Francisco poet-minstrel, Dino Valenti.

Jonathan Wilson’s sonic signature is all over these tracks, enhancing a sense of brilliant discovery as Sheff finds new ways of writing and making music. His songs are still spectacularly wordy – “Mary On A Wave” finds him trying to fit all the words in the world into a Scrabble sack – but the looser, more spontaneous song structures allow his melodic gifts to flourish. Not that the album’s dynamic range is limited to acoustic guitars, upright bass, mellow brass, strings and brushed drums. “Judey On a Street” is a tremendous mix of The Modern Lovers’ “Roadrunner” and throbbing motorik pulses, while “Frontman In Heaven” reaches a rhapsodic crescendo reminiscent of “Rock’N’Roll Suicide”, Sheff all but imploring anyone listening to give him their hands.

The Stand-Ins (2007) and The Stage Names (2008) were darkly sardonic meta-fictions about fame and what the famous do when fame is taken from them, full of arch conceits, Okkervil River cast as the stars they did not in fact become. Here Sheff confronts the reality of the band’s slow disintegration on the wry, heartfelt “Okkervil River RIP”, basically the sound of a dream evaporating. “The Industry” is Will’s “Idiot Wind”, a recriminatory broadside aimed at everyone who let the band down, including themselves, full of gathering desperation. Unconditional tenderness replaces sour rancour on regal album highlight, “Comes Indiana Through The Smoke”, a song about his grandfather, Will’s hero, TH “Bud” Moore. When he was dying in a New Hampshire hospice that Sheff attended daily, the old man’s thoughts turned often to his wartime service on the American battleship, the USS Indiana, which saw action at Tarawa, Guadalcanal, Iwo Jima and Okinawa. The song is a hugely moving hymn to both, richly imaginative, powerfully evocative, unbearably poignant, a vanishing point.

Q&A
Will Sheff
You’ve described Away as a ‘death story’, which sounds a bit cheerless.
I guess I don’t really think of death as cheerless. I don’t think I’m very often talking in these songs about literal death. I’m talking about allowing some way you’re living to die, so that you can figure out a new way to live. I think a lot of the ways I was living had become unsustainable or had just stopped yielding any kind of reward. I realised a lot of my illusions, bad habits, hang ups, assumptions and goals had to be let go of.

And that included what Okkervil River had become?
Okkervil River had stopped feeling, to me, like “me”. It became this outside idea that almost seemed to belong to other people. But I just wrote these songs and recorded them quickly with an improvised group of musicians and I found myself feeling more free than I’d felt in decades. When I tried to remember the last time I’d felt this good, I recalled the earliest days of Okkervil River, when I’d moved to Texas and thrown myself head-first into a band nobody had heard of and that was all I cared about. I realised I was basically the last man standing from that band, after so many lineups and reiterations had risen and died, and that it was time to die again so what was meaningful about the band, to me, could rise again.
INTERVEW: ALLAN JONES