All the UK singles collected – and how good they were! 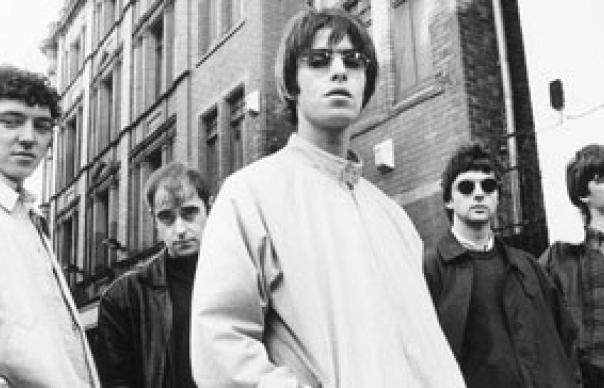 After the last decade of dope opera, any sane person would be forgiven for breathing a sigh of relief at the news that Oasis have packed it in. Time Flies…, which gathers up all the band’s UK singles, serves to remind us why, before the nonsense set in, we loved them so damn much. And how, after that first eruption of stardust-spattered majesty, they’ve drifted off into loud, defiant semi-irrelevance.

Oasis emerged from a Britain made gloomy grey by years of Thatcher and Major, and into a musical world dominated by the twin miseries of jittery trip hop and late-period grunge; their first single, “Supersonic”, was released five days after Kurt Cobain killed himself. Driving a Day-Glo coach and horses through this swamp of paranoia and shoulder-shrugging introspection, the Mancs offered positivity, hedonism and skies as blue as a Man City shirt, all powered by heritage Lennon/McCartney melodies and rolling glam rock riffs.

In 23 breakneck months between April 1994 and February 1996 Oasis released two unarguably great albums and 11 singles of luminous brilliance. These latter, from “Supersonic” through to “Don’t Look Back In Anger”, were the equal of any run that The Beatles, the Stones, The Who or The Kinks – the bands against whom Oasis so brashly measured themselves – ever put together. The young folks adored them; “Live Forever” was that sod-everyone-else anthem that every generation needs to gird its loins for the road ahead. Old rockers lapped them up, the band’s respectful updating of The Canon affording them another chance to shake a joyous tail feather. With astonishing rapidity, they soon ruled the pop culture roost; you couldn’t start an era-defining comedy (The Royle Family) or end an epochal drama (Our Friends In The North) without using their music. By 1997 they were as big as they always said they’d be; more amazingly, they’d made music every bit as marvellous as they’d sneeringly promised.

The masterplan (get nearly as big as The Beatles by sounding quite a lot like The Beatles) had worked. But, it turned out, the masterplan – or maybe Oasis’ execution of it – had a long-term flaw. The band’s best early songs are about yearning and craving and striving. Once the lads had attained all of which they’d ever dared dream – stardom, adulation, girls, hot and cold running drugs – they never quite, despite all Noel Gallagher’s enduring mastery of tune construction, mustered up the passion and desire that made Definitely Maybe and Morning Glory such magnetic brews. More importantly, their major influence changed. The group’s indebtedness to The Beatles had always been obvious and largely undisguised. Occasionally it reached surreal proportions – they were sued for plagiarism (over “Whatever”) by Neil Innes, who, as the main songwriter for The Rutles, had himself made a tidy living aping the writing style of Macca and John L. After Morning Glory, all that changed. Instead of looking to the Fab Four for inspiration, Oasis were increasingly under the thrall of their own initial output. From the careless mess of the third LP (Be Here Now, tossed off, Noel has admitted, in a ‘fuck it’ cocaine haze), through the remainder of the singles contained here, there’s a diminishing-returns search for heights once effortlessly scaled, for missing keys, for lost chords.

As if in recognition of these (inevitable, forgivable) declining standards, the compilers of Time Flies… have been careful to avoid strict chronology. By sandwiching it between “Don’t Look Back In Anger” and “Cigarettes…”, they hope, perhaps, to bring glamour-by-association to the limp “Songbird”. By marbling them through the true classics, they believe, maybe, that we’ll see some of the later, slightly wheezing, efforts in a new, more flattering, glow. And to some extent, this strategy works. What becomes evident is that though some of their newer creations are wan retreads of headier templates, Oasis rarely made bad singles, even if 2007’s “Sunday Morning Call”, is only granted inclusion as a secret track on the second disc. The marathon “Falling Down”, for instance, cut loose from its dreary setting in their final LP, sounds like one last tremendous kick against the dying of the light.

If what you’re really after is a Best Of, then the nearest you’ll get is 2006’s Stop The Clocks. That collection, put together by Noel and brutally biased toward the earlier vintage, is a proper monument. Time Flies…, though fun, is no more than a handy place to nab all 27 Oasis’ singles in one unfiltered, undiscerning grab.
Danny Kelly