NO COUNTRY FOR OLD MEN 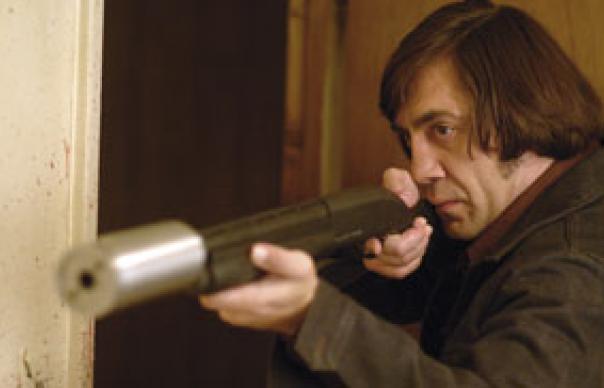 SYNOPSIS:
West Texas, 1980. Antelope hunting out near the Rio Grande, Llewelyn Moss stumbles across a drug deal gone wrong. There’s bodies everywhere, a truck full of heroin and $2.4 million in a satchel. Taking the money, Moss sets in motion a series of events that will change everything. After all, when money goes missing on the Tex-Mex border someone, inevitably, is going to want it back.


You’ll find Sanderson roughly halfway between El Paso and San Antonio on Highway 90, the population at last count being 861. It’s possible you’re already familiar with Sanderson, or at least places like it; fictionalised versions of this kind of fly-blown Texas town have been the go-to location for bloody border fracas and other violent misdemeanours in countless crime novels and movies. As such, you could be forgiven for thinking that pretty much all of those 861 folks living in Sanderson are either drug dealers, psychopaths or hitmen.

Sanderson is the setting for Cormac McCarthy‘s 2005 novel, No Country For Old Men, a tense, stripped-down thriller that’s here been adapted and directed brilliantly by the Coen brothers. Coming off a disappointing run of movies, culminating in the dreary remake of The Ladykillers in 2004, No Country For Old Men partly calls to mind the Coens‘ grim, unforgiving debut, Blood Simple, another noir-ish story about greed and murder in, er, a small Texas town.

We meet Llewelyn Moss (Brodin), a Vietnam veteran who’s served two tours in-country, hunting antelope out on the mesa. He stumbles across several bodies, three trucks and a case full of money. He takes the money. Certainly it’ll help him and his wife Carla Jean (Kelly Macdonald) move out of the Desert Aire trailer park and set them on their way to a new life. But Moss knows, too, that men will be coming after him, probably with murder in mind. Brolin, who’s recently given fine performances in Robert Rodriguez‘ Planet Terror and Ridley Scott‘s American Gangster, has Moss pegged as a fundamentally good man, but who, crucially, isn’t quite as smart as he thinks he is.

Principally, what Moss doesn’t count on is that the man sent to recover the money is Anton Chigurh (Bardem), an appallingly perverse sociopath whose preferred instrument of death is a pneumatic prod made for slaughtering cattle. Bardem‘s Chigurh, sporting an absurd, baroque hairstyle, is a typically McCarthyesque force of evil, operating some considerable way beyond the natural order. “He’s a peculiar man,” rival hitman Carson Wells (Woody Harrelson) explains to Moss. “You could even say that he has principles. Principles that transcend money or drugs or anything like that. He’s not like you. He’s not even like me.”

Chigurh is as relentless in his pursuit of Moss as, say, Al Lettieri‘s terrifying Rudy Butler was of Doc and Carol McCoy in Peckinpah‘s film of The Getaway. You can’t imagine Moss has crossed too many people like Chigurh before, even during his time in South East Asia. Neither has taciturn County Sheriff Ed Tom Bell (Jones, the perfect fit for any number of characters in a McCarthy novel), who’s following Chigurh’s trail of carnage and hopes to save Moss from some similarly gruesome fate. “Old age flattens a man,” Bell says, and one reading of McCarthy‘s title is that the modern world has no place for men like the sheriff, whose principles and rules of conduct are obsolete when confronted with men like Anton Chigurh. Another could be that very few people in McCarthy‘s novels ever make it to the end of their natural lifespan, their journey to the grave hastened by men like Anton Chigurh.

The pairing of McCarthy and the Coens works surprisingly well. McCarthy‘s novels, usually full of grotesque and depraved monsters prone to outbursts of extraordinary violence, don’t immediately suggest themselves as potential movies-in-waiting. But the characters and narrative of No Country For Old Men are so cinematically familiar that the Coens can stick admirably close to the novel and still deliver a great film that sits comfortably alongside their best. In fact, the way violence impacts on a remote, peaceful community in No Country For Old Men echoes events in Fargo, and you can draw parallels between sheriff Bell and Brainerd’s pregnant police chief Marge Gunderson, both of whom are trying to comprehend the grim horrors creeping across the county line.

“It’s a mess, ain’t it Sheriff?” Asks a deputy when he and Bell first come across the corpses and burned out SUVs in the desert.
“If it ain’t it’ll do till a mess gets here,” replies Bell.

After the arch pastiches of their recent films, it’s something of a relief to find the Coens playing it fairly straight here. But, astonishingly, for directors who tend to offer some sliver of optimism even in their most downbeat films, the Coens are prepared to run with the bleak conclusion McCarthy draws in his novel. That is, as Chigurh pursues Moss through a series of run down motels and across the Tex-Mex border into increasingly bloody circumstance, the harsh acknowledgment that there’s no mercy, compassion or forgiveness to be found in an increasingly godless and heartless nation.

“I always thought when I got older that God would sort of come into my life in some way,” says Bell.
“He didn’t.”