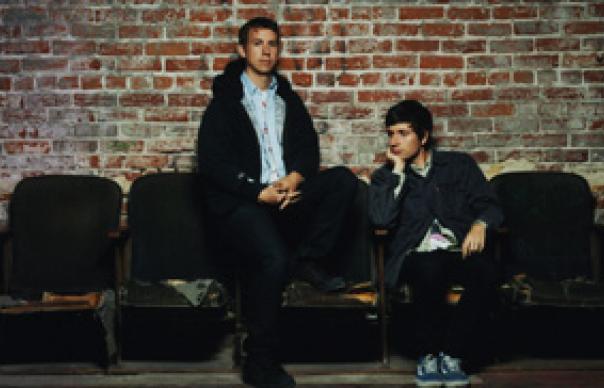 Nouns poses an hypothesis of sorts: what happens when the punk rock of The Misfits and Black Flag meets the hissy lo-fi of Pavement’s Slanted And Enchanted and the ecstatic throb of My Bloody Valentine’s Isn’t Anything? The answer is thirty minutes and twelve songs long, bashed out with Fonz-like cool, but captured with a fuzz-soaked, dreamy production that makes good use of the tools and methods of budget production: the smeared, neo-psychedelia of hissy four-tracks and cheap guitars played through cheap pedals, applied here not through necessity, but for sheer love of the sound.

No Age are still punks at heart: the opening “Miner” busts out the traps at speed, but it’s blurred and chaotic, vocals subsumed in a mush of effects. Spunt and Randell make this sound their own, though: the joyful “Sleeper Hold” imagines surfboards waxed and skate ramps traversed through a humid haze, azure guitars crashing like waves, while at the other of the spectrum, “Impossible Bouquet” offers a drifting, ambient guitar interlude with more in common with Fennesz’s Endless Summer or The Durutti Column than any more familiarly punk touchstone.

The gorgeous “Cappo”, meanwhile, echoes a much earlier generation of Californian songsmiths, voices multi-tracked in some surreal echo of Pet Sounds: “Don’t you wanna cry?/If I were you, I’d cry/Force it out…” In an age where every rock riff must be compressed for maximum punch, No Age’s quixotic recording techniques might leave them feeling slight. Taken on its own terms, though, Nouns is a righteous success: delightfully dazed, good-times punk rock for a new generation of Californian dreamers.