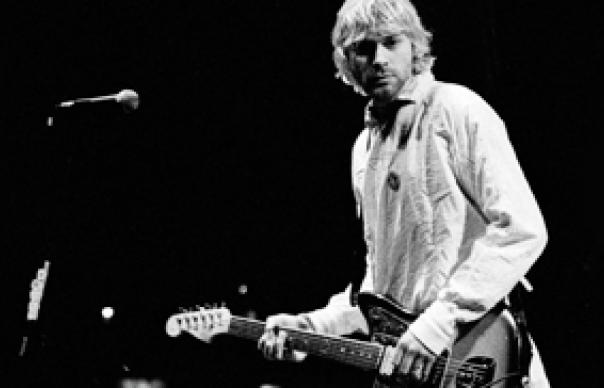 You want a chastening thought? Kurt Cobain has been dead for more than 15 years. If you look up internet forums on which this performance – from 30 August, 1992 – is discussed, you’ll find among the shared memories of the event, a teenager saying “My dad was there”.

Cobain’s daughter, Frances Bean, could make the same boast more poignantly; one of the few moments of direct communication between Kurt and the Reading audience comes when he dedicates “All Apologies” to her, noting that she is just 12 days old, before choreographing a mass expression of bonhomie for his absent wife, Courtney Love. Clearly, Cobain is sincere – pained sincerity was his thing – but you do wonder whether a few weeks of paternity leave might have offered a more purposeful expression of fatherly devotion.

But no matter. This is a fierce live performance by a band who didn’t always manage to hold things together onstage. It catches Nirvana at maximum intensity, aware of, but not disabled by, the contradictions that tormented Cobain and would eventually tear him asunder. (Teenage readers may note that these demons included depression, chronic pain in the guts, drug addiction, and an exaggerated distrust of the mass popularity that had unexpectedly rained down on Nirvana.)

In recent years there has been some speculation about the extent to which Cobain was broken by his success, and it’s a question to which there can be no definitive answer. But he certainly gave a good impression of a man who liked to think of himself as an outsider, and who subsequently had trouble with the thought that his painful individuality earned him the empathy of a great mass of people with whom he had nothing in common. (You can hear this thought in verse form during “In Bloom”). Put another way: if fame was the answer, the question must have been pretty stupid.

There were some scratchy live shows when Nevermind first exploded, with Cobain playing through various types of discomfort. Here, at least, Nirvana – Cobain and his less charismatic cohorts, Krist Novoselic and Dave Grohl – play it straight, but not before a jokey intro, involving Cobain, a wheelchair, a blonde wig, and a hospital gown. (A response to unfounded rumours of Kurt’s impending demise, the skit isn’t exactly Mark Twain, but never mind).

With 15 years hindsight, and the millstone of grunge hanging around their legacy, the originality of the music is harder to locate. Nirvana were many things: a mistranslation of the Pixies, a hardcore howl from punk’s second wave, Black Sabbath with the fat cut off. In their Unplugged moments, a sympathetic listener might detect echoes of Hank Williams or Roscoe Holcomb, but Nirvana in full flight was not subtle. It was about noise, speed and obliteration, delivered from the borderland between nosebleed and neuralgia.

There is a refreshing lack of stagecraft: no video screens, no ramps, spaceships or mini-Stonehenges. There is, it’s true, an “interpretative dancer” called Tony, who gives a good impression of a man who is whacked to the point where he can no longer feel embarrassed by his chronic lack of grace. He dances like a lump, for a very long time. Cinematically, too, there is nothing fancy. The camerawork is unencumbered by crowd shots, fast-cuts, or stupid cranes.

What you get is three guys whose stage clothes are their street clothes, playing as if they had no choice in the matter. (Kurt wears the hospital gown throughout.) What you get is a set that delivers Nevermind with the energy of Bleach, and looks forward to the concentrated angst of In Utero. It’s not fun, but it is exhilarating.

What you get is an ironic intro to “Smells Like Teen Spirit”, in which Nirvana toy with Boston’s “More Than A Feeling”; 50,000 people singing “Lithium”; and a moment, during “On A Plain”, where you can hear that Nirvana, like Joy Division, were train-wrecked heavy metal.

In the end, tradition wins. The instruments are decorously smashed. Kurt dabbles with feedback, and though his guitar has long since lost its compass, he grinds towards through “Star Spangled Banner”, like a punk Hendrix, set to self-destruct.