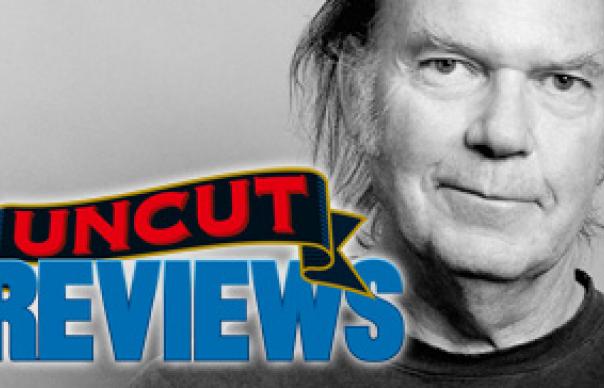 From the very beginning of his musical career, Neil Perceval Young has never doubted his own importance, even in his high school days. The recollections of colleagues and friends recently gathered in Uncut Take 142 describe a young man utterly focused on writing, playing and the technology of stardom, be it guitars or blagging gigs. The first disc of Archives offers a fascinating glimpse of the teenage Neil, already able to blaze out on electric guitar with The Squires, but also venturing into the twee folk of “I’ll Love You Forever”, delivered in the vulnerable, melodic falsetto that’s been his calling card ever since. The demo of “Sugar Mountain” at age 20 finds him almost fully formed.

It’s telling that “Sugar Mountain” is a song about leaving childhood behind; there never was a time when Neil Young wasn’t staring into his rear-view mirror, chewing over experience, whether reminiscing on “Helpless” about “the town in North Ontario/all my changes were there” or delivering at the ripe age of 26, a film called Journey Through The Past, more of which later. It’s entirely in character that at 63 Young should issue the obsessively detailed electronic documentation of his life that is Archives Vol 1, the most ambitious retrospective any musician has undertaken.

It’s a behemoth of a boxset, firstly as there are several versions of it. Do you go for the DVD version, which delivers 10 discs, including the movie, and a plethora of photos, lyrics and memorabilia? Or the economy set, which delivers audio content only? Or do you dig deep for the Blu-Ray version, where you can browse through the time-line of Neil’s life and discover hidden tracks and such odd video clips as Neil in the corner of a New York bar, playing for passing strangers, before swapping media horses to leaf through the gloss of the colour book? One suspects most fans will take options two or three, since the DVD version won’t deliver in your CD player (or download to iTunes), and listening to Neil’s archives while watching an antique record player or tape recorder, YouTube style, soon gets old.

Interactive trickery aside, what does the committed Young fan get for their bucks? For many, the answer may be not as much as they hoped. As deep musical archaeology the disc of Young’s formative years is intriguing and largely unreleased, but predictably in a lesser class to what followed after he’d joined Buffalo Springfield in 1966, or his solo output after signing to Reprise in 1968. The Springfield material is all extant in one form or another apart from “Sell Out”, a quirky commentary on commercial pressure with a “Subterranean Homesick Blues” tinge to it, and “Slowly Burning”, a dreamy string-laden guitar instrumental.

The 26 tracks from the era of Neil Young and Everybody Knows This Is Nowhere (Disc02 and Disc04) likewise hold few surprises beyond a a live session in which Young berates his audience – “You’re all so down, I’m going home to write for a month” – before delivering a beatific version of “Sugar Mountain”.

His show at Toronto’s Riverboat club in January 1969 – the content of Disc03 – offers an equally compelling sample of Young’s live act. Neil spoofs his meagre crowd with rambling asides about “the English guitarist Alan O’Dale – he’s better than Clapton” between poised takes of Springfield’s (and his own) songs. The crowd clearly don’t realise to what they’re being treated by a man who within the year would become a major star. His mercurial ascent with Crazy Horse and then Crosby, Stills, Nash and Young is well captured here, demonstrating how Young songs like “I Believe In You” and “Helpless” overlapped the styles of both bands: the muscular approach of Crazy Horse (perfectly captured live on Disc05) and the intricate harmonies of CSN&Y.

By the turn of the decade Young was writing profusely and with an acuteness that his earlier work lacked. After The Gold Rush – profiled extensively on Disc06 – with its themes of mortality and vulnerability, ecology and political anger, perfectly caught the mood of disillusion that greeted the departure of the ’60s. If the follow-up, 1972’s Harvest, took that mood to a more self-satisfied place it was understandable; Young was by now a wealthy star esconced on his Broken Arrow ranch in California, with a laid-back lifestyle enforced on him by spinal surgery. Disc08 is given over to this period, interspersing original album versions with out-takes that vindicate the original choice, and sundry live takes that include a superb “Heart Of Gold”.

In there, too, is 1971’s Toronto concert at Massey Hall (Disc07) – previously released but here endowed with grainy live footage and home movies from Broken Arrow – you want to know who inspired “Old Man”? Here he is, in all his weatherbeaten glory.

That leaves Journey Through The Past (Disc09), Young’s first directorial outing as Bernard Shakey, released in 1973 to a critical panning and dormant until now. As a movie it’s a mess, a hopeless mix of documentary footage from the 1970-71 CSN &Y tour, clips of Neil that invariably involve cars, and a long end sequence of clumsy symbolism involving black-hooded horsemen, a robed scholar stranded in a desert and suchlike. As a piece of history it’s priceless, capturing CSN&Y in blistering, indeed, deranged form onstage, spaced out offstage amid fields of clover, and articulating the paranoia that had infested the hippy dream –cutting away to a clip of Richard Nixon promising America “clean air and clean water” or seeing “Ohio” to the Kent State massacre, you get a whiff of the times. Indeed, an entire wordless scene is devoted to Neil and his old lady sitting on a vintage car fender smoking a doobie; the hippyidyll in aspic.

Archives bristles with much more – you’ll find, for example Young’s father’s review of his 1971 show – and it’s hard not to believe that Neil the tech-head has not laid down a template for all future retrospectives (one can imagine Dylan and McCartney, the only artists of comparable stature and longevity, paying close attention). There’s more, too much more, to come, but for now, Volume One will do just fine.