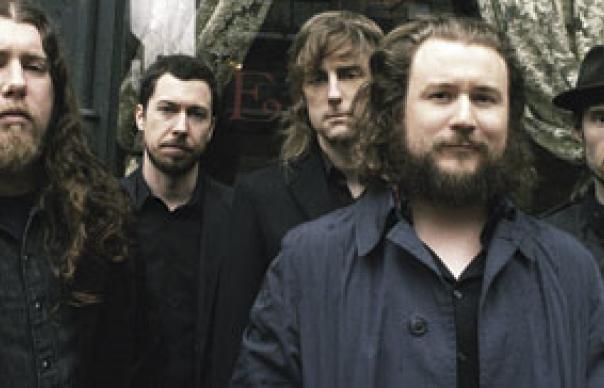 It’s hard not to commend a band who dare to change, even if the act of switching lanes makes them stumble. In 2005, Louisville quintet My Morning Jacket released their fourth album, Z, morphing not altogether deftly from a proto-Fleet Foxes/Band Of Horses bunch of reverbed retro-rockers into something altogether spacier and shinier.

The follow-up, 2008’s Evil Urges, saw them retreating even further into a genre-bending pre-punk world of glassy AM rock, squelchy funk and prog-tinged, kitchen-sink lunacy. Defined by its jumpy, ADHD, dial-hopping feel, Evil Urges delivered a Top 10 album in the US, but didn’t play so well in the UK.

Circuital might well change that. It’s certainly the work of a band with a reinvigorated sense of their own identity. On the beautiful, hand-stitched campfire ballad “Wonderful (The Way I Feel)”, Jim James sings “I can learn from way back when and still live right now”, a sentiment which neatly sums up the holistic intentions of this record. The euphoric title track, which begins like Fleet Foxes singing Radiohead’s “Creep” before throwing some slashing, Townshend-y acoustic guitars into the mix, finds James’ voice cracking as he hymns a return to “the same place that we started out”.

These are telling moments of affirmation, and surprisingly literal. Having recorded their first three albums in a grain silo in their native Kentucky, My Morning Jacket returned to a similarly organic environment for their sixth album, converting the gym of a Louisville church into a makeshift studio and recording the basic tracks live. The results certainly capture their fearsome capabilities as a live unit, but they do much more besides. If Evil Urges sounded like a band slipping into self-consciousness, at times so eager to escape easy classification that they forgot what they were good at, Circuital is far more comfortable recognising the broad sweep of their history.

James describes the songs on this record as a “family unit”, which seems apt. Whether they’re admiring the classic ’60s pop architecture of “Outta My System” (“they told me not to smoke drugs but I wouldn’t listen”), like a powerpop Beach Boys, or clinging to the awkward, stop-start rhythm of “The Day Is Coming”, these 10 songs share a thread of kinship which binds them tight together.

There’s real warmth here, real heart. Touchingly open, “Wonderful” lacks any of the distance of irony, drifting into satisfied silence on the back of James’s train-whistle falsetto. “Slow Slow Tune”, meanwhile, turns an ancient three-chord trick into something almost hymnal: “Gotta radiate the gold,” sings James from the middle of a narcotic haze, like the Velvets playing The Shirelles. Best of all is “Movin’ Away”, a beautiful ballad built on waltz-time piano, pedal steel and the loveliest melody on the album. Captured at the tipping point between sorrow and ecstasy, burning bright with the pain of being alive and the sure knowledge of the rewards it brings, it’s a wonderfully affecting finale.

The funky nu-groove remains, but it’s more deftly deployed. The ritualistic “Victory Dance” is a sluggishly compelling opener, James’ voice climbing to a house-burning climax on a thick analogue synth riff and Patrick Hallahan’s sleek drums. “First Light” is a more loosely drawn map of the same sonic territory, while “Holdin’ On To Black Metal” is essentially ludicrous but oddly thrilling, all cheap ’80s Casio stabs and a synthetic Cuban groove nicked from Miami Sound Machine. Throw in an Isley Brothers guitar solo and what sounds like a massed chorus of female freedom fighters and you have a return to the scattergun excesses of Evil Urges.

What does it all mean? Not much, probably, but it’s fun. Like many beautiful, clever things, Circuital convinces you to turn a blind eye to its (precious few) individual weaknesses and indulgences and simply admire the whole, as each song weaves its way into the fabric, finding its place. Despite several terrific individual tracks, this record ultimately derives its considerable strength from a renewed appreciation of the power of collective identity.
Graeme Thomson

Q+A Jim James
Were there aspects to Evil Urges that you wanted to change this time?
Not really. We wanted Evil Urges to be like a giant video game with lots of “levels”. This one just wanted to be all in one space, more circular and encompassing. It’s more the study of a family unit, whereas on Evil Urges we were trying to look at all the different people in a city.

What state were the songs in when you went in to the studio?
I tried to not do very defined demos. I’d simply record the melody and idea on my cell phone so I wouldn’t forget it, but I wanted to have the magic moments of the song being captured in the actual “album recording” one hears on the record. We wanted the main core of each song to be live, with each of us feeling good about what he had laid down in that take.

Why choose to record in a gymnasium?
It chose us! It was way more relaxed and comfortable. We set ourselves up with Evil Urges to be in a pressure cooker, looking for a tension and energy from the city. This time it was all about familiarity and space and time. Both sides have their advantages and disadvantages.
INTERVIEW: GRAEME THOMSON