Morrissey – World Peace Is None Of Your Business

I know it’s not over… The Moz enters a gripping new, possibly climactic, career phase... 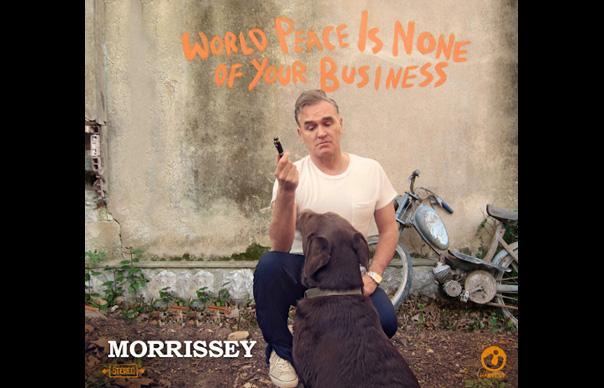 I know it’s not over… The Moz enters a gripping new, possibly climactic, career phase…

Only a year ago the prospect of a new Morrissey record seemed inconceivable. Out of contract since 2009’s Years Of Refusal, with a sorry litany of cancelled tour dates and a season ticket at Cedars-Sinai hospital, the 30-year career finally seemed to be winding down.

Yet the perfectly timed deployment of last autumn’s Autobiography turned everything around. Beyond the piquancy of the book’s poison and point scoring, the renewed attention and a season at the top of the paperback charts reinvigorated Morrissey’s career just as it seemed at its lowest ebb. Now, after a recording sojourn in the south of France, a triumphant US tour featuring support from Sirs Tom and Cliff, and a series of glossily potty spoken word promos, he returns once more to the breach with the first of two records for Harvest.

World Peace… feels very much like the beginning of Late Morrissey. Though Autobiography refreshed his profile and secured a new deal, you wondered what he could possibly have left to say in its wake, now that particularly quarry had been exhausted. The book, after all, began like a gothic collaboration between Mary Shelley and Elizabeth Smart and wound up an interminable diary of tour dates and ticket sales. One prospect for Late Moz seemed to be yet more namechecking of his itinerary. And sure enough, after “Mexico”, “Paris”, the Roman holiday of “You Have Killed Me” and “Scandinavia”, World Peace begins like some valedictory grand tour with the stately, Sparksy, kicking-off-everywhere title track, veers off to “Istanbul” and includes the Viva Espana frolic of “The Bullfighter Dies”.

But while the latter is, sure enough, a sulky two-minute swirl through Madrid, Seville and Malaga (largely redeemed by the breeziest twang and jangle he’s managed since “Interesting Drug”), “Istanbul” is more intriguing and suggestive. Over the shuddering Bo Diddley beat that has served him so well from “How Soon Is Now” to “Disappointed”, the singer ventures out into seedy moonlit Turkish sidestreets in a vain bid to reclaim his “brown-eyed son”, lost to streetgang vice.

It’s a startlingly performance and production. Returning to the stage in San Jose in May, Morrissey joked that he had finally been able to record “the follow-up to Viva Hate”. And in many ways World Peace sounds as fresh as Viva Hate did in the wake of The Smiths. After three albums geared to the live show Mozpit, Joe Chiccarelli’s production is as lavish and spacious as Stephen Street’s, while always founded on the pounding bedrock of the Walker brothers rhythm section. And multi-instrumentalist Gustavo Manzur, who gets his first co-writing credits on “Neal Cassidy Drops Dead” and “Earth Is The Loneliest Planet”, reprises something of the role of Vini Reilly, providing the instrumental filigree and shadow on flamenco guitar, accordion and keyboards.

But it’s the lyrical focus of “Istanbul” that sets the tone for Late Morrissey. While “Piccadilly Palare” back in 1990 first touched on the reckless liberty of rentboy squalor, here the doom that was dimly sensed is fully achieved: “I lean into a box of pine/Identify the kid as mine”.

If the worst of Autobiography was petty score-settling, the best of World Peace… feels like a more profound reckoning with his work and its consequences. At times its feels like one of those post-credits film sequences, detailing the final destiny and demise of the cast. Once upon a time, a title like Strangeways Here We Come felt like a giddy promise of adventure, “Last Of The Famous International Playboys” treated prison like the green room for notoriety, and even “I’ve Changed My Plea To Guilty” saw the prospect of incarceration as blessed relief from “emotional air-raids”. “Mountjoy” is the final instalment in Morrissey’s jailhouse rock opera. It’s Morrissey’s reprise of both Behan’s The Quare Fellow and Wilde’s “The Ballad Of Reading Gaol” (even, in its cosmic desolation, Beckett’s Malone Dies) all passion, desire and even gallows humour spent. All that’s left, over sparse acoustic guitars and ominous cellos, is a final dismal realisation: “We all lose”.

Best of all is “Smiler With Knife”. Jesse Tobias has hitherto been an unheralded addition to the touring band, but now pulls out of the bag one of the indubitably great Morrissey songs. Here the reckoning is with “I Know It’s Over” – the song you might feel, at 3am on certain November nights, to be the very pinnacle of the Smiths’ mordant romanticism. Astonishingly “Smiler” doesn’t suffer from the comparison. As close mic-ed as Sinatra on Where Are You?, tracing a tentative melody over sour sevenths and crunching power chords (it could be Jonny Greenwood arranging a Sondheim torch song), Morrissey wills into being a beaming assassin to plunge the knife in. While the earlier song passively observed “the knife wants to cut me”, here the consummation is devoutly wished.

Without the musical guile, this despair can seem cynical. “Kick The Bride Down The Aisle” is notable chiefly for its spiteful update of “William, It Was Really Nothing”, shorn of any redeeming self-love, while “Oboe Concerto” feels inescapably like a sequel to “Death Of A Disco Dancer”, though without even the vague promise of love, peace and harmony in the next world.

But World Peace isn’t all disillusion and pitiless despondency. “Kiss Me A Lot”, notably, is the most uncharacteristically chirpy tune he has ever recorded: a shameless Kiss Me Quick sombrero of a song, complete with “Delilah” castanets and flamenco guitar. If released as a single you can imagine it residing on the Radio 2 A list for the rest of 2014, even soundtracking a celebrity chef’s tango on the next series of Strictly…

The album has its fair share of filler: “Earth Is the Loneliest Planet” plays “Mountjoy”’s cosmic desolation for laughs, featuring Star Trek backing vocals from Kristeen Young, while “Staircase At The University” (an unnecessary update to “The Girl Least Likely To”) feels like a redundant b-side.

But, at its best, World Peace… feels like the perfect penultimate episode in the last season of a beloved TV series. With renewed ambition, gallows swagger and final-curtain sobriety, it sets the scene for a savage, melodramatic final act he might have spent his career plotting and stage managing. After all this time I can’t wait for the next Morrissey album. Am I still ill?
Stephen Troussé