Punk before they called it that. Weird.Loud. Thrilling. 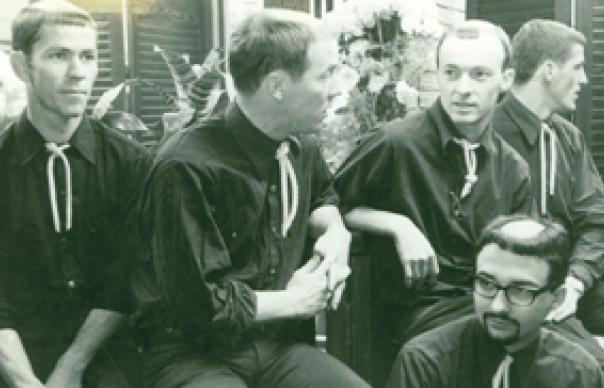 The story of the Monks has been told before, but it certainly bears repeating. In the early ’60s five bored American GIs living on an army base in a small town near Frankfurt formed a rock’n’roll covers band, The 5 Torquays, spending most of their period of service playing local bars as part of a US Army-sponsored PR outreach exercise.

The Torquays’ residency in a Stuttgart dive led to an encounter with two young ad execs – Karl Remy and Walther Niemann – who were as much interested in Dadaism as product packaging. Taking on management of the group, Remy and Niemann made them over as the “anti-Beatles”, crafting an image and set of songs that were both overtly aggressive and almost autistic in their primitivism.

Potential band names give a clue to the kind of feel that they were going for, but Molten Lead and Heavy Shoes were ditched in favour of the Monks, leading inevitably to a change of image. Yes, the band dressed as monks both onstage and off – in a time when most musicians’ hair was resting luxuriantly on their paisley collars, the Monks shaved tonsures into their army buzzcuts, topping off their matching black uniforms and white instruments with neckties made from nooses. The latter, incidentally, were intended to be symbolic of the metaphorical noose that all humanity wears.
In line with their distinctive image, the Monks’ music was wildly out of step with the fashions of the time. Quite apart from singing songs about hate, paranoia, self doubt, James Bond and the madness of Vietnam, they also used feedback as a weapon, but delivered their songs with fixed grins when they played at Hamburg’s Star and Top Ten clubs. Perhaps unsurprisingly, this approach was not exactly one built for long-term success – the chorus to their debut single for Polydor ran “Complication! CONSTIPATION!”, while at one gig an enraged crowd member clambered onstage and tried to throttle guitarist Gary Burger. When the Monks split in 1967, they had one album, a couple of singles and little more than local fame in pockets of Northern Germany to live off.

But somehow the Monks’ rallying cry (“I’m a monk, you’re a monk, we’re ALL monks!”) resonated. The song about constipation was included on the Nuggets boxset, while the patronage of fans like Mark E Smith (The Fall have covered several Monks songs), Jello Biafra, Jack White and Henry Rollins (who first reissued Black Monk Time in 1994 on his own label) led to a tribute album, documentary film and a series of fanatically received reunion gigs. Now their album is re-released in the kind of deluxe packaging normally afforded to big-selling records of the period, and comes accompanied by a compilation of unreleased demos.

Most excitingly, there’s really nothing that can dull the impact of hearing the Monks’ music for the first time. When they played live they emphasised their group unity by standing in a row at the front of the stage, centred around the pulpit that housed Larry Clark’s organ. Accordingly, there are no solos on Monks songs. Instead everything is as loud as everything else: feedback, martial drums, fuzz bass and an overamped banjo that sounds like the forked end of a crowbar being scratched on sheet metal. It’s industrial music – melody is replaced by brevity and the kind of emphasis on repetition that saw them fêted by the later Krautrock bands, while the vocals sound nothing less than strangulated. Frenetic opener “Monk Chant” features a genuinely deranged stream of consciousness rant (“Stop it! Stop it! I don’t like it! It’s too loud for my ears!”) that has parallels in the Sex Pistols’ version of “Johnny B. Goode” (“Stop it! It’s fuckin’ awful!”), but is really like nothing much before or since. A handful of groups found something approximating the Monks’ sound a couple of years later – but most of them arrived at it through an interest in avant-garde classical music. For the Monks, this was pure instinct, which is the root of their genius.

Black Monk Time is 43 years old. The best compliment we can give this surreal record is that it’s as perplexing and invigorating now as it must have been in 1966. Maybe even more so.

You were signed to Polydor. How did they treat you?

Our labelmates were people like Bert Kaempfert, but our producer was an absolute jewel of a man. We trusted what he was trying to do. Black Monk Time is exactly what the Monks sounded like live. No overdubbing. Very energetic, very precise and, of course, very loud.

One time we were playing in South Germany and this strapping fellow jumped on stage and proceeded to strangle me. I bashed him on the head with my guitar and the security people grabbed him and tossed him out. But usually I saw puzzlement in the audiences. They were wondering how to dance to this strange music. But we had dedicated fans who would show up in black.A few even shaved their heads…

How famous were you at the time?

We had a wonderful time playing rock’n’roll in Germany. The Beatles had just had their day in Hamburg and now it was the turn of the Monks. The kids loved us, and as for what the older generations thought of us, well, who cares? We all suspected that we were years ahead of our time but we didn’t know that it would be 30-plus years before the Monks became legend.