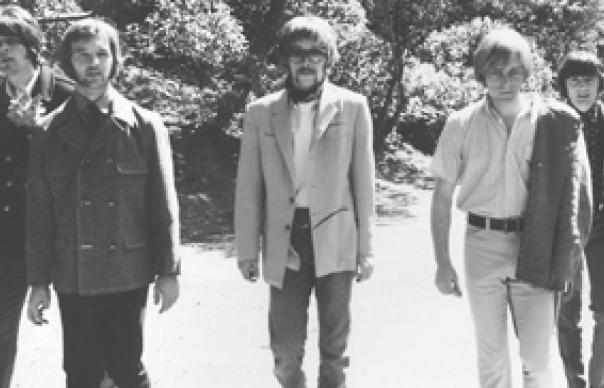 Boasting five hyper-talented singer/songwriters (guitarists Peter Lewis, Jerry Miller, and Skip Spence, bassist Bob Mosley, drummer Don Stephenson) Moby Grape were the sixties’ most audacious combo. And, as it turns out, among the most vulnerable to implosion. Yet the group’s combustible chemistry survived reprehensible management, sex-and-drug scandals, even attempted murder, to produce a formidable body of work, including Moby Grape, a near-flawless disc that, like Love’s Forever Changes, gains in stature and resonance as the years fly by.

Avatars of Frisco’s second wave, Grape were an on-stage locomotive–Spence out front with a coiled intensity and a madman’s grin–steamrolling the era’s more docile bands with an explosive three-guitar attack and ricocheting harmonies. Having paid dues in bands all down the West Coast, the quintet presented the best amalgam yet of high-octane country, rock, jazz, and blues. And Moby Grape had it all–from pulsating rockers like Spence’s dizzying “Omaha” and Lewis’ churning, ominous “Fall On You” to the fragile balladry of “8:05.” For topical subtext, Mosley’s infectious R&B joie de vivre, “Come in the Morning,” and its obverse, the spooky, existentialist “Lazy Me,” captured crucial twin impulses rippling through the newly minted counterculture circa 1967.

But oft-overlooked Moby Grape ’69, a dazzling rally virtually nobody heard, is another story. Stellar songwriting, including the madrigal “I Am Not Willing,” finds the band’s cosmic vision miraculously intact. Yet, for all its strengths, its most spectacular cut–Spence’s Grape goodbye “Seeing”–is the most disturbing work in their canon. With its sizzling guitar leads, haunted harmonies, and crazed cries of “Save me!” it’s among the most unhinged psychedelia ever recorded, the musical equivalent of peering into the abyss.

UNCUT: Are all the legal battles with ex-manager Matthew Katz over?
BOB MOSLEY: It’s all over with. We got our name back, we got our publishing, we got our royalties, yeah, it happened in 2006.

UNCUT: That first album is still mesmerizing all these years later.

BM: We worked up those songs at the Ark, the Fillmore. We knew they were great songs. We listened back to it at Big Brother’s house with Janis Joplin when we first got it. Their release was the same night so we listened to them both. They loved it . . .

UNCUT: “Come in the Morning” is a fantastic Motown-like cut. Did you have an R&B background?

BM: Oh yeah, I had worked with Joel Scott Hill and Johnny Barbata [both later of Canned Heat] back in 1965, and I got my chops up there on Motown, Stax/Volt, Muscle Shoals, all that stuff.