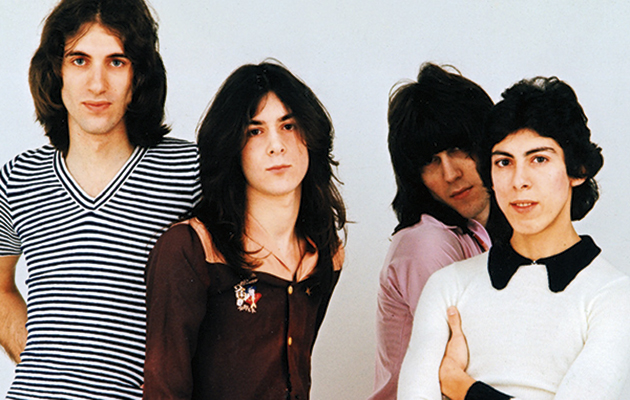 Ushered in by The Velvet Underground and intensified by the New York Dolls, the NYC rock underground in the early 1970s was a bubbling cauldron, about to explode in a dozen different directions. As the decade wore on, CBGB opened and punk arrived, it did, bringing the world such wildly diverse talents as the Ramones, Television, Blondie and Talking Heads.

Milk ‘n’ Cookies, already bar-scene upstarts by 1973, arguably influenced them all. But timing is everything in such a high-stakes pressure cooker, and within the Cookies’ weird story the quintet’s timing was all wrong exactly when it seemed to be just right. Hit producer Muff Winwood came calling, inserting Roxy Music bassist Sal Maida into the lineup, and whisking them to London to record their Island debut. A series of misunderstandings and record company manoeuvres later, the band was dropped, and the record slipped out two years later as an afterthought, essentially shredding – reversing even – their once cutting-edge reputation. Milk ‘N’ Cookies’ moment vanished.

That ill-fated LP, a curious few would eventually learn, is grand, ahead of its time, a brash, genre-bending testament to the effervescence of youth. The group gleefully anticipated punk, dancing upon every non-conformist theme roiling through glam-drenched 1974: the Raspberries’ sturdy, melody-based pop, the Dolls’ hard-driving, sexually ambivalent rock’n’roll and T.Rex’s sly irony, plus David Bowie, Sparks and others – wrapping it all in a bubblegum sheen.

Singer Justin Strauss led the fray. A fascinating tangle of contradictions, he was poised yet impetuous, fey yet audacious, naïve yet knowing, with an edgy, theatrical, sexually ambiguous air. Songwriter Ian North, later a solo artist, answers Strauss’ persona with enveloping keyboard flourishes and snaking guitars. They had an experimental edge, too, with some odd time signatures and occasional bouts of minimalism – see the stop-start-stutter of their most risqué track, “Rabbits Make Love”.

At their most gripping, though, Milk ‘n’ Cookies penned pulsing guitar-pop anthems about impulsiveness, sex and youth: “Little Lost And Innocent”, “Not Enough Girls In The World” and “Just A Kid” all peer into that ephemeral moment when life feels wide open.

This special edition immaculately rights the band’s sad narrative, adding 20 unheard tracks, including a pugnacious 1976 Warner Brothers demo that both confirms Winwood’s original instincts and hints as to their would-be evolution. A 120-page hardbound book, recounting their Shakespearean twists and turns, treats the group with a reverence denied them in their prime.