Sci-fi drama takes itself a little too seriously 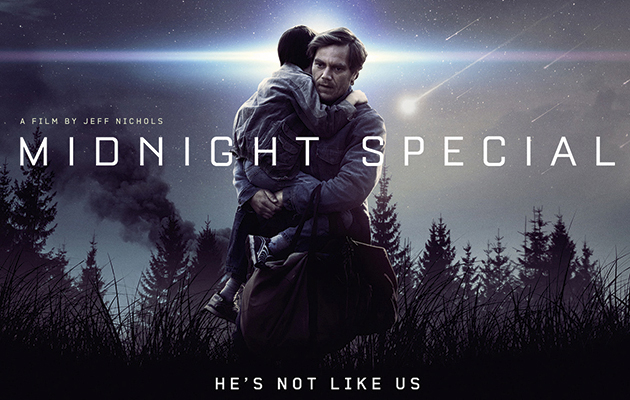 There are a lot of furrowed brows in Jeff Nichols’ news film. And a lot of staring, pensively, into the middle distance. These are Nichols’ ways of signaling that Midnight Special is a serious and thoughtful film, although essentially it is a variation on a hoary old sc-fi conceit – the child with special powers.

To bolster the weightiness of his undertaking, Nichols has attracted a quality cast – Michael Shannon, Kristen Dunst, Adam Driver, Joel Edgerton and Sam Shepard – while David Wingo’s sussurating ambient drones evoke ruminative moods. It is safe to say that like other recent genre pieces Cloverfield, Monsters and District 9, Midnight Special has aspirations beyond its B-movie origins. Although it’s a laudable intent, it’s hard to locate gravitas in a story that feels largely like an episode of The X Files. Much as the grounded and serious tone of Christopher Nolan’s Batman movies was inherently implausible – it’s a man, dressed up in a bat suit! – so Nichols attempts to imbue Midnight Special with similar qualities often feel ponderous.

The first 30 minutes of Nichols’ film are arguably the strongest. Shannon and Edgerton appear to have kidnapped an 8 year-old boy called Alton (Jaeden Lieberher) who has unusual powers. “Things would break. Lights, cars,” says one eyewitness. “A visible spectrum of light came from his eyes,” says another, rather dogmatically. Around this, Nichols slowly shades in some detail. Shepard heads up a religious cult who have attached their own beliefs to the boy’s gifts. The FBI are also interested in Alton, keen to monitor his destructive capabilities. As Shannon and Edgerton escort the boy through the back roads of Louisiana and Arkansas, Midnight Special has an intimacy and focus that recalls Nichols’ earlier films – the excellent Mud, a kind of updated Huck Finn that marked the start of Matthew McConaughey’s career upswing, and Take Shelter, a thriller with Shannon as a man who experienced apocalyptic visions.

When the scope of Midnight Special gets bigger, it falters. The pacing is out of whack, it’s too long and for a chase film there is remarkably little dramatic tension. It’s all a bit Speilbergy; but critically, it lacks the warmth and sense of wonder (or even fun) of the obvious antecedents, E.T and Close Encounters Of The Third Kind.

Adam Driver – as an NSA analyst drafted in to assist the FBI – has a little of Richard Dreyfuss’ gangly charm and deftness. But everyone else is taking it all far too seriously.