MIDLAKE – THE COURAGE OF OTHERS 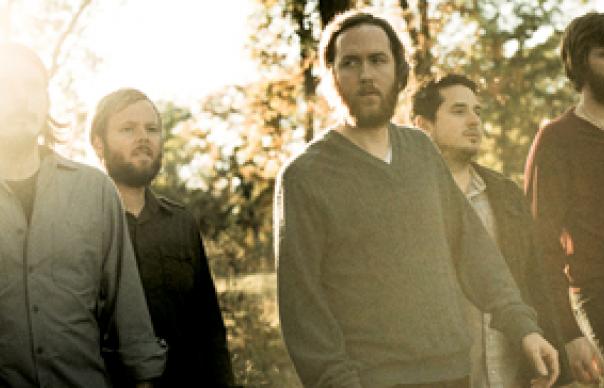 The authentically auburn harmonies and storied West Coast AOR of Midlake’s breakthrough album, 2006’s The Trials Of Van Occupanther, suggested that the band had been wallowing in Laurel Canyon lore their whole lives. In fact, Midlake’s chief songwriter Tim Smith recently let slip that prior to starting work on that album, he’d never even listened to Neil Young.

Midlake began life as a student jazz band, in thrall to John Coltrane and Herbie Hancock. They were sniffy about modern rock music until they heard Radiohead’s “Paranoid Android” – consequently, their debut album was a fairly rigorous homage to OK Computer. Then came a crash course in smooth ’70s rock, from which emerged the glorious …Van Occupanther.

Now they’ve spent the last three years immersing themselves in another previously-unfamiliar field, that of British electric folk. Midlake have done their homework: in interviews trailing this album, they’ve namedropped not only Fairport and Fotheringay, but more obscure perfumed garden peculiars such as Mellow Candle and Windy Corner.

However, Midlake’s secret is out: they’re highly skilled dilettantes, attempting to master a different genre on each album just to give themselves a challenge. That’s no crime in itself, and it beats making the same record over and over again, but it may explain the gaping hole at the heart of this strangely frigid album.

The pristine harmonies are retained, but this time they’re hitched to aching minor-key progressions, sung with cowed solemnity rather than uplifting abandon. Acoustic guitars and flute interweave in the space left behind by the absence of the last album’s freewheeling piano, while an electric guitar smoulders in the background like an abandoned campfire. Songs linger rather than glide, and while opener “Acts Of Man” is exquisitely forlorn – “When the acts of men cause the ground to break open/ Oh let me inside, let me inside not to wake” – the sombre mood soon becomes a bit oppressive.

There are no “Roscoe”-style fantasies here to save us, either. Smith’s delicate but austere lyrics evoke tableaux of weatherbeaten figures fruitlessly hoeing dry soil or huddling for warmth around a dying flame. “I will train my feet to go on with a joy/A joy I have yet to reach/I will let the sounds of these woods that I’ve known/Sink into blood and to bone,” he sings dolefully on “Core Of Nature”, like the protagonist of Cormac McCarthy‘s The Road forcing himself onward through the ravaged landscape. …Van Occupanther’s golden wistfulness shines on “Fortune”, but such sunny intervals are scarce.

The title track’s forbidding drone heralds Smith’s most vulnerable lyric to date. “I will never have the courage of others,” he bemoans, before the song slips rather readily into a weary coda, Smith repeating the words “he trembles alone” like a fraught mantra, before he’s consumed by duelling guitars. The lilting rhythm of closing track “In The Ground” finally gives the album a bit – but only a bit – of the verve it’s been lacking, before it too succumbs to the frost.

Perhaps if The Courage Of Others had been released 10 years ago, it might’ve seemed more special, but the whole Brit-folk thing is ground that’s been raked over fairly thoroughly in the last decade by the likes of Espers. If Midlake are taking suggestions for which genre to tackle next, let’s propose something a little further off the beaten track, like Hawaiian exotica, or go-go. They’re obviously good enough musicians to make a decent fist of pretty much anything. Like …Van Occupanther, The Courage Of Others is texturally rich and technically refined, elegantly capturing the ambience of the folk rock scene to which it pays fulsome tribute. But sadly, there’s something cold and unwelcoming at its core.