The band move on with a subtle change of emphasis following Tim Smith's departure... 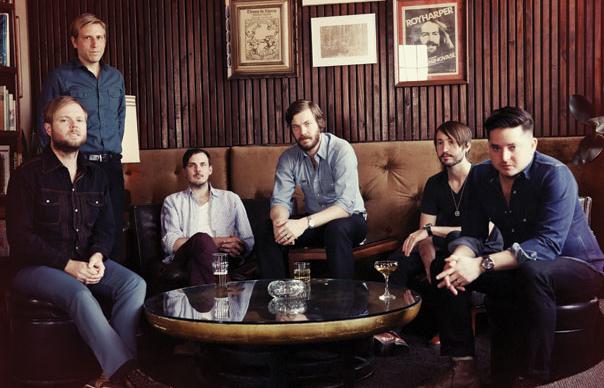 Bands who survive the exit of their creative leader are rare. Bands who keep the same name, carry on regardless and thrive are almost unheard of. When the first Midlake recording sessions since 2010’s Top 20 album The Courage Of Others exposed the rifts at the heart of the band and resulted in the departure of lead singer and songwriter Tim Smith, Eric Pulido, Paul Alexander, Eric Nichelson and McKenzie Smith would have been forgiven calling time on the band, or at least drifting aimlessly for a while as they decided whether to stick or twist.

Instead, Pulido – who had only joined the band in 2004, five years after Smith initially formed Midlake – stepped up and essentially took over Smith’s role. This didn’t involve a radical change of direction; Pulido favours the same ‘70s folk-meets-soft-rock melodies and dark bucolic lyricism, and is even a dead ringer for Smith as vocalist, a smooth tenor who loves to bed his lead within warm band harmonies. A casual fan of their two breakthrough albums, 2006’s The Trials Of Van Occupanther and The Courage Of Others, may not even notice the difference.

But the opener and title track immediately introduces the subtle changes of emphasis. Pulido’s stately melody throws sudden curveballs. Alexander’s bass is deep and tough, an almost post-punkish element within a sound that constantly recalls Days Of Future Passed-era Moody Blues. He and McKenzie Smith step forward as a rhythm section, giving a discreet funk to the mid-tempo stroll. The playing feels more spontaneous and freewheeling, with organ or guitar or drums suddenly taking centre-stage before even more suddenly falling back into line. The song ends dissolves abruptly into a radioactive synth crackle, and segues straight into “Provider”; a trick pulled repeatedly, giving Antiphon the feel of a suite of songs, rather than a simple album.

A record so ambitious musically – with all the elements above joined by orchestras, woodwinds, surprisingly angular guitar and lots of carefully deployed prog-rock synth runs – needs one big song to pull the listener into its world, and it arrives three songs in. “The Old And The Young” is a bubbling, swinging anthem on the subject of Be Here Now, with a chorus so infectious and celebratory that it manages to bathe the entire album in sunshine. It opens the way for less instant songs – the symphonic instrumental “Vale”, the resigned divorce ballad “Aurora Gone”, the stormy, pensive triptych “Ages”, “This Weight” and “Corruption” – to take hold of ears, head and heart.

The latter two, in particular, dominate the end of the album with bleak visions. “This Weight” opens with the couplet, “I’m not fooling anyone but me/I don’t love anyone but me”, which is more a withering judgement on human selfishness than either a Pulido confessional or, as it could easily be read, as a coded kiss-off to Smith. Meanwhile, Paul Alexander’s piano-led “Corruption” poses a philosophical question: ‘Science our daughter/Religion our father… Who is mother?” Its rhetorical, as Alexander has already answered his own question in the song’s title. This cryptic form of political overview dovetails with Antiphon’s sleeve art, which looks like a global firework display but is actually a visual representation of the corporations that control the world.

Antiphon, named after a form of call-and-response song, is not a call-to-arms. But it is a response to a time of sadness and change, and an attempt to find solace in the simple act of keeping going. It’s full of notes to us and to self about throwing off the past and moving forward, even though erasing the past is impossible. And it might just grow into an even better record than The Courage Of Others, as one gets used to the way it replaces Smith’s precision and popcraft with the new Midlake’s love of digression and sonic adventure.
Garry Mulholland

Q&A
Eric Pulido
You’ve said that, when Midlake began recording after touring The Courage Of Others, “something was missing.” What was that something?
Energy. Cool ideas were forming, but as we kept beating them to death the life got sucked out of it. All that material was completely scrapped when Tim decided to leave.

When Tim announced his departure, did Midlake consider splitting?
I should’ve been shitting my pants at the beginning of this! But I think we have more of a dynamic vision now. We’d got a little too comfortable in just facilitating Tim’s vision. When he left we were able to throw everything out and say, “OK – how do we wanna start again, so that everybody feels ownership of this?” The excitement had been lost. There weren’t even many of us coming to the studio anymore. It was like, “Call me when you need me.” And that’s just not a band.

You re-presented the brilliant John Grant to the world by being his backing band on Queen Of Denmark. What effect has his subsequent success had on Midlake?
That’s a great question because we made John’s record while making The Courage Of Others, where we had many obstacles to overcome and which came out quite dark, and found making John’s record quite cathartic. It was enjoyable and collaborative and subconsciously reminded us that making music can be fun.
INTERVIEW: GARRY MULHOLLAND