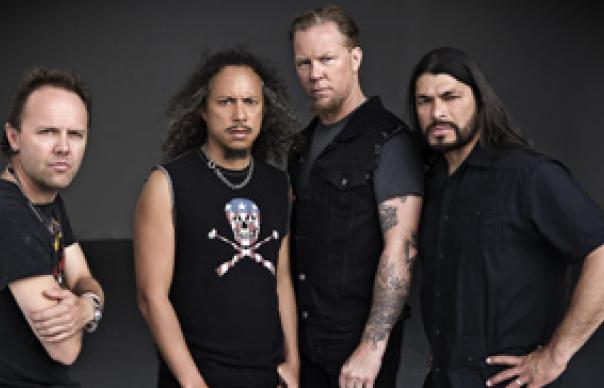 Metallica really need Death Magnetic to be a blockbuster comeback. They have, after all, had a pretty lacklustre decade so far. Their last album, 2003’s St. Anger, was arguably the weakest of their career. Having already alienated millions of fans with their very public stance against online file-sharing, these former none-more-black outlaws began to look jaded and complacent.
Then came the childish tantrums and touchy-feely therapy sessions of their remarkable backstage documentary, Some Kind of Monster. A compelling spectacle, but for all the wrong reasons. Former bass player Jason Newsted’s departure, and singer James Hetfield’s long retreat into drink-and-drugs rehab, exposed a band on the brink of collapse. For a while, it looked like the Dark Knights of uber-metal might end with their career, literally, with a whimper.

And so, the fightback begins. Death Magnetic is Metallica’s first studio album in 17 years without Bob Rock, the pop-metal producer who helped propel them to global superstardom with The Black Album in 1991. In his place, Rick Rubin takes over production duties. Rubin’s latterday reputation as a one-man career rehab for middle-aged artists is important here, but so is his portfolio of major thrash-metal credits, notably Slayer’s Reign In Blood. Yanking Metallica out of their comfort zone, Rubin encouraged them to make a definitive statement in the spirit of their 1986 prog-metal milestone, Master of Puppets.

The result is an album which fuses the baroque, super-sized thrash marathons of the band’s first decade with the more melodic and restrained alt-rock growls of their second. Most of these ten tracks are seven-minutes-plus symphonies, dense with overlapping riffs, crackling with rude kinetic energy, bristling with ideas. The scale is immense, the level of detail intense.

New bassist Rob Trujillo makes his mark on ferocious funk-metal grooves like “The End of the Line.” More significantly, for hardcore fans, Kirk Hammett’s superfast guitar solos – a serious omission from St. Anger – are back in abundance. His arrival on tracks like “Broken, Beaten and Scarred” explodes like a fireworks display high above rhythm guitarist Hetfield’s gnarly, bludgeoning, Godzilla-stomp riffs.
But Hammett really surpasses himself on the poundingly propulsive speed-punk gallops “All Nightmare Long” and “My Apocalypse”, unleashing crazed pile-ups of powerhouse squiggling. In moments like these, Metallica sound less like stadium-rock megastars than avant-garde noise-punks.
Hetfield may be a sober family man these days, but his lyrical obsessions remain firmly lodged between slasher-movie horror and psychodrama. On “The Day That Never Comes” he returns to familiar motifs of family cruelty and domestic violence: “love is a four letter word, here in this prison”. Beginning as a mournful power ballad, this muscular mini-epic becomes progressively more crunchy and aggressive, with Hetfield snarling like a caged animal.

Tender introspection is rare on Death Magnetic, but not wholly absent. Reprising one of Metallica’s best-known anthems, “The Unforgiven III” opens with an airy, graceful flourish of piano and strings – very “Lick My Love Pump”. Then Hetfield fires up a variation on that familiar brooding melody, although this time his own guilt is a key theme: “how can I blame you, when it’s me I can’t forgive?” Naturally, all this anguished soul-baring climaxes with a thunderous stampede of piledriving riffs. Respect.
Death Magnetic is impressive, but not flawless.

The meandering instrumental “Suicide and Redemption” lacks bite, feeling in places like a Mike Oldfield-style exercise in masturbatory virtuosity. And the whiplash garage rocker “Cyanide” slips into generic chugging at times, the kind of default Metallica setting that drummer Lars Ulrich scornfully branded “regular” in Some Kind of Monster, provoking Hetfield’s fury.

But, overwhelmingly, this is not an album that reeks of midlife complacency. Metallica sound hungry, angry and ambitious again. Like all the best heavy rock albums, it suspends your disbelief, demands your attention and connects directly with your inner adolescent. After 80 minutes of pulverising highs and lows, it leaves you feeling drained and strangely elated. Metallica are back: not with a whimper, but a very loud bang.