Guy Pearce stars as Leonard Shelby as a man with a rare form of short-term memory loss. 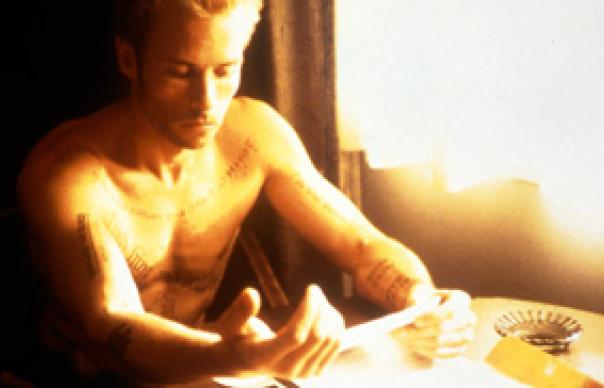 “Great story. Gets better every time you tell it. So you lie to yourself to be happy. Nothing wrong with that – we all do. Who cares if there’s a few little things you’d rather not remember?” So reasons Joe Pantoliano’s Teddy, enlightening – to an extent – Guy Pearce’s haunted Leonard Shelby, and us. Not that the revelations do Teddy any good.

When Christopher Nolan’s Memento first surfaced in 2000 (the first great film of the century?) Uncut was moved to an involuntary spasm of purple poster quotes. “One of the most compelling, challenging films of the year”, we babbled. “Unforgettable. You’ll be gripped, enthralled and exhausted. Momentous.” But it was hard to say why: we couldn’t give away the ending. Hell, we couldn’t give away the middle. So cunningly and originally structured was this dark, delicious work of nouveau noir that adjectives of a just-go-see-it strain had to suffice.

Now, figuring that most of you have seen it at some point during the last four years, we can get into the question of why Memento bears repeat viewings like few other films. Once the killer ending has kicked in, and the scales have fallen from your eyes, you immediately want to watch it through again to see if the director’s nerve and audacity is justified. If it hangs together. It sure does. But wow, what sublime sleight of hand. On this triple-disc set, there’s an easter egg of the movie in reverse scene order, just to prove it. This version obviously lacks the startle factor of the original (which had particular impact during Carrie-Anne Moss’ femme fatale machinations), but it’s a brilliant exercise, a riveting remix.
Nolan took the plot from a short story by his brother Jonathan (who reads that tale, Memento Mori, aloud here). Leonard has a “condition”, a rare form of short-term memory loss, since the brutal rape and murder of his wife. Every day he wakes up and wonders how he got wherever he is. To trigger some recall, he keeps notes, Polaroids, even clues tattooed on his body. He’s bent on vengeance. But is he a guided missile or a deluded loose cannon? Where’d he get the flash car, the clothes? Should he trust the enigmatic smile of bartender Natalie (Moss) or the lippy urgings of strange cop Teddy? Who is Leonard talking to on the phone? And why is he also obsessed with the poignant tale of the damaged Sammy Jankis and his long-suffering wife? This is one mystery where the phrase “all will be revealed” carries a savage sucker punch.

It’s shot with studied shadowy atmosphere. The monochrome sections echo Nolan’s debut Following, and Pearce’s voiceover is of rare confessional intimacy. Pearce’s contribution is often underrated. Yes, he’s a servant to the story’s cleverness, but he does a magical job in maintaining Leonard’s ambivalence. So likeable and vulnerable, yet so ruthless and potentially evil. As a blonde lead in noir land, he’s a sculpted, heroic nod to Rutger Hauer in Blade Runner, Nolan’s favourite film. Moss, too, shows intense acting skills (wasted in The Matrix) as another character making us question who to trust. “She will help you out of pity”. Oh yeah? She and Pantoliano are angels/devils on our man’s shoulders. If deceit and betrayal are what make a plot progress, Memento marks a quantum leap in the thriller genre.

“A romantic quest”, muses Teddy. “A puzzle you can never solve”. For a movie about brain damage, and about the way we all build our self-image from scratch every dawn, Memento has crisp flashes of humour, more noticeable now. Leonard putting on Natalie’s shirt, because, of course, he would. The motel hooker’s look of this-is-weird-but-I’ve seen-weirder. Leonard’s comment of “The pleasure of a book is in wanting to know what happens next.” The craziness in his interior monologue: “OK, so what am I doing? Oh, I’m chasing this guy.” A beat. “No, he’s chasing me.” The script has to be watertight, and is.

Nolan’s now gone to the US full-time, with barely a whimper from the obtuse British film industry. Insomnia was wide awake, and we can’t wait to see what he does with Batman. Meanwhile, here’s the ingenious movie which made his name. Remember its rigour. Believe its lies.