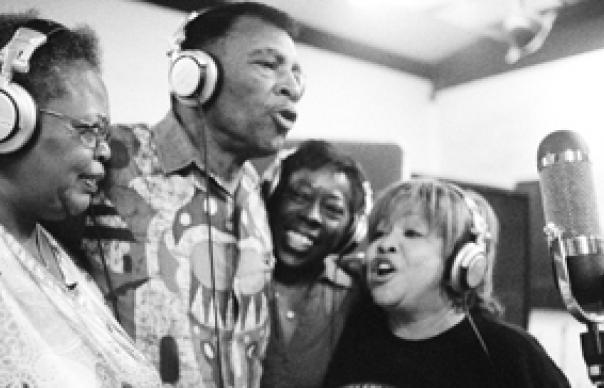 From the moment that Roebuck “Pops” Staples befriended Martin Luther King in the early ‘60s, the Staple Singers’ brand of gospel developed an explicitly political edge. They recorded church music spiked with righteous anger (like the funk standard “Why Am I Treated So Bad”); or redemption songs that were as political as they were spiritual, like their 1972 US chart-topper “I’ll Take You There” (complete with sly anti-Nixon digs like “Ain’t no smiling faces/Lying to the races”).

Now, seven years after Pops’ death, his daughter Mavis continues that tradition with “We’ll Never Turn Back”, an album of ‘60s civil rights anthems. It’s produced and musically directed by Ry Cooder, and like Cooder’s recent album “My Name Is Buddy”, it investigates the flipside of the American dream – the America of radical protest and collective action.

Original versions of these songs can be found on various Smithsonian Folkways compilations: Staples says the aim was “to upgrade them”. Not all of it works – here “We Shall Not Be Moved” is reduced to a dreary pub blues workout. But elsewhere it succeeds brilliantly. “Eyes On The Prize” and the title track become thrilling slices of southern-fried funk which recall Dr John’s “Walk On Gilded Splinters”. JB Lenoir’s “Down In Mississippi” is given a haunting, Afrocentric edge by Ladysmith Black Mambazo, while Ry Cooder’s wobbly, steel-bodied guitar is the perfect counterpoint to “Jesus Is On The Main Line”.

If Mavis’s voice has become rather ragged in the higher register, her clarity and phrasing are still perfect. “In The Mississippi River”, a shocking, “Strange Fruit”-type dirge about lynch mob victims being dredged from the water, sees Staples growling the story, while ‘60s veterans The Freedom Singers provide luscious harmonies.
All round, it’s a successful fusion of tradition and modernism. As Rutha Harris’s high-pitched howl takes on the disembodied quality of a rave sample, it’s hard not to be won over by the project’s eerie majesty.

UNCUT: How has your voice changed over the years?
MAVIS STAPLES: Obviously, I can’t sing some of the high notes – a lot of songs I’ve had to sing in a lower key. Pops always said “make it plain” and I’ve always tried to do that, You have to pronounce the words clearly to tell the story.

“We Shall Overcome” is notable by its absence…
Yes. I think the Civil Rights struggle moved on. After years of Dr King’s leadership, we were no longer at the bottom. “We’ll Never Turn Back” had a much stronger resonance for African Americans.

How does Ry Cooder compare with Prince as a producer?
They’re different types of genius! When Prince produced two albums of mine in the 1980s he was rarely with me in the studio. But Ry does things like we did back in Muscle Shoals, with all the singers and musicians playing together. Sometimes, with Ry, I could hear touches of Pops. It’d hear some stray guitar lick and it’d send a shiver up my spine.