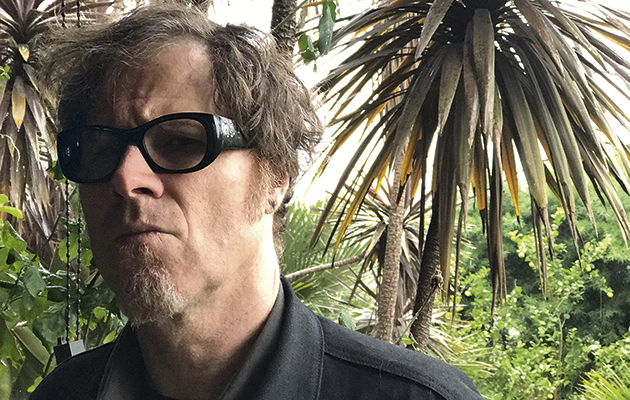 Where male falsetto voices can be unsettling – disembodied, artificial, androgynous, ethereal, cosmic, otherworldly – ultra-low-frequency voices like Mark Lanegan’s are supposed to have the opposite connotations. They are supposed to suggest a reassuring rootsiness and authenticity, which is why we are comfortable with Lanegan as the godfather of grunge, as the gothic crooner, as the ravaged blues singer, the windswept acoustic troubadour. But men with very low voices aren’t meant to delve into the synthetic soundscapes of electronica. When they do, the effects can often be deliberately jarring, like when Leonard Cohen started croaking over tinny drum machines and toy-town synths in the mid-1980s.

However, Lanegan seems to have used the ethereal oddities of his

It’s why he seems to have fitted quite comfortably into the world of left-field synth pop. Think Depeche Mode at their darkest, crank up the doom and pitch-shift Dave Gahan’s voice down an octave, and you’re close to the appeal of Gargoyle, Lanegan’s darkly compelling new album.

Lanegan is a serial collaborator, someone who likes working with people who will push him out of the box. Over a career of more than three decades he has mentored musicians who went on to become American rock royalty – from Kurt Cobain to Queens Of The Stone Age – but much of his most interesting and adventurous material has been recorded with British artists. There have been lengthy partnerships with Glaswegian singer Isobel Campbell, electronica duo Soulsavers and maverick multi-instrumentalist Duke Garwood, not to mention one-off collaborations with the likes of Massive Attack, PJ Harvey and James Lavelle’s UNKLE.

Here his transatlantic partnership is with little-known English multi-instrumentalist Rob Marshall. Formerly a member of Yorkshire indie-rock outfit Exit Calm – who played on the same bill as Lanegan in 2008 – he now makes music from his home studio in Kent. On resuming contact recently, Marshall sent over a bunch of nascent electronic instrumentals he’d recorded. Lanegan, suitably enthused, started writing lyrics, eventually transforming them into six Lanegan/Marshall co-writes that provide some of the most spectactular moments on Gargoyle.

After years of crippling heroin habit, Lanegan has been clean since the millennium, and now seems to be comfortable using addiction as a metaphor throughout the album. On “Nocturne” the pain of loneliness and bereavement is likened to “that lonely drug is in my veins”; on “Beehive” the drug is more of a metaphor for love (“in my head, buzzed as a bee’s nest… honey just gets me stoned”); on “Emperor” the protagonist needs another bitter pill to help fight the demons that enslave him; while “Sister” is haunted by the image of a “morphine-drugged”.

Most of all, Lanegan seems to revel in a certain bleakness. Against a deceptively happy melody and hymnal harmonies, “First Day Of Winter” seems to revel in the “icy tears” and the cold that “chills my veins”. And the closer “Old Swan” seems to take welcome extinction for a higher aim. Sung in a major key at the upper end of Lanegan’s register (which, in fairness, is still lower than most baritone voices), it’s a pulsating paean of praise to mother nature that takes on a spiritual dimension. “Though my soul is not worth saving/my mistress and my queen/your spirit is larger than my sin”. It’s a bleakness that is almost cleansing and redemptive.

Q&A
You’ve started using more and more electronic instruments in recent years. Has it changed the way in which you write and work?
I started messing around with the synths a little bit on Field Songs back in 2001 and then with drum machines and synths on Bubblegum in 2004. By the time I made

Did you actually meet up with Rob for this record, or was it all done by mail and internet? Is that how you often work with UK collaborators?
So far, Rob and I have only worked long distance. It was the same with UNKLE. With Isobel Campbell, Soulsavers and Duke Garwood, some of it was done like that but most of the time we were in the same place while recording.

You have been posting angrily on Twitter about Trump since the election. Has any political sentiment made its way onto the album?
Anything that I’m feeling usually works its way into a song. But I might be the only one to know it…
INTERVIEW BY JOHN LEWIS