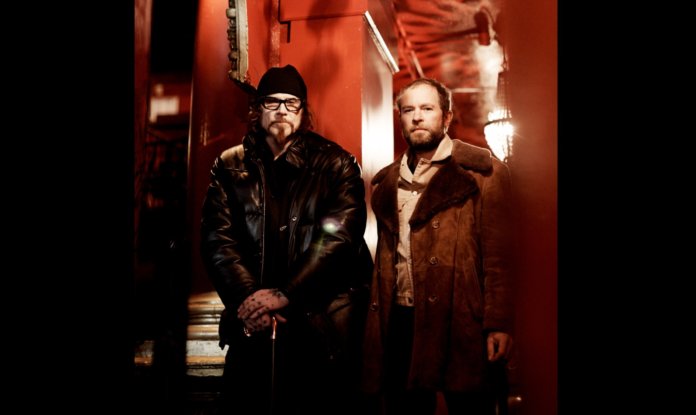 There’s a moment on “My Shadow Life” that encapsulates the humid, prickly atmosphere of With Animals. As a drum machine snares out a steady beat and Mark Lanegan huskily whispers an elusive lyric about love and darkness, a clarinet roves into play. It drifts into earshot like an instrument being played in a neighbouring apartment on one of those clammy city evenings when windows are thrown open against thick summer heat. Then, just as mysteriously, it fades away again, like the memory of a dream. It’s uncomplicated but it achieves a lot, and that’s With Animals in a nutshell.

Lanegan and Duke Garwood first collaborated on 2013’s Black Pudding, with the multi-instrumentalist Garwood finding sinewy desert-rock rhythms for Lanegan’s unmistakable voice and lyrics about God, death and sex. That was a fine LP, but it was fairly conventional. With Animals is a different beast entirely, Garwood creating a sparse, electronic, heat-baked sound that is as absorbing as it is alienating.

The LP was born in the sticky discomfort of an LA heatwave after a tour of North America. An exhausted Lanegan went on holiday leaving Garwood, who plays in Lanegan’s band, to look after his pets – two cats, six dogs. Sitting on Lanegan’s sofa in the desiccating South Californian heat, Garwood needed to create or melt into madness. He got an old eight-track from a friendly studio, picked up his guitar, programmed Lanegan’s Casio keyboard to provide the drumbeat and set to work. All but one song was created like this, audibly analogue but with an electronic backwash, a series of drones and loops that leak from track to track, and are overlayed by simple, repetitive guitar lines. Lanegan came home, listened good, wrote some cryptic but heartfelt lyrics and the LP was done.

In his work with Greg Dulli, Isobel Campbell and QOTSA, Lanegan has shown he’s a generous collaborator. His partnership with Garwood is based on a total separation of duties – Garwood does music, Lanegan does words – and on With Animals Lanegan is, if anything, the more understated presence. On songs like “Feast To Famine” he barely sings at all, with vocals just another layer of atmosphere. On sparse opener “Save Me” he sounds like he’s intoning a call-to-prayer over a tick-tock drum track, while on the plodding “Scarlett” you picture him wandering through a one-horse desert town pleading for a lost soulmate. Almost every song references love of some kind, but none are love songs. Instead, words and music combine to produce a sense of pregnant desperation, a bleakness, a sense of loss, guilt and yearning. When Lanegan asks “Won’t you miss me, baby?” on “L.A. Blue”, he sounds like a desperate man expecting “no” for an answer. On the gorgeous “One Way Glass” he speculates about “something lonelier than death”.

The latter song asks Lanegan to do more than simply underscore Garwood’s parcels of alluring atmosphere and provide an alternative melody rather than an additional weave of texture. The brilliant “Upon Doing Something Wrong” is one of the few songs here that you could sing along to. It sees Garwood concoct a jubilant jangle of guitars, with Lanegan singing in a slightly higher key, naked with pain, regret and sorrow. Similarly, the disembodied lullaby “Ghost Stories” is given added mystery by Lanegan’s higher register, which sounds as if it was recorded in another room. In contrast, “With Animals” has the singer reaching for his deepest, most mesmeric growl, muttering ominous incantations, spells and chants as he describes his lover as a drug, a murderer, a sorcerer, a seraphim. It’s startlingly good. Like Cave and Cash, Lanegan has the capacity to embrace the gothic without rendering it ridiculous.

“Spaceman” is the most melodically upbeat song on the LP, Garwood creating a fuzzy tune of guitar and maracas. It’s bluesy and celebratory, even if Lanegan is singing from the perspective of a condemned man addressing a hangman. In terms of deceptive jauntiness, it’s rivalled by “Lonesome Infidel”, which borrows the tune of “I’m So Lonesome I Could Cry” then slows it down and adds haunting, echoey whistles and electronic ambience, taking it far from rock or country. The closer “Desert Song”, written by Garwood in Joshua Tree, is an acoustic strum that for once is stripped of electronic background. That allows Garwood’s guitar work to see things out on centre stage, with Lanegan contributing yet another matchless vocal of sad and piercing intent.