Their 10th album is a glam belter, full of fire and thunder, gospel choirs and orchestras. But still not pompous... 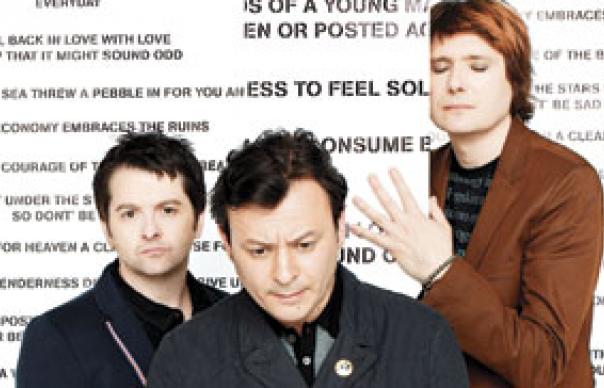 Alternating between “glam” albums (from Generation Terrorists to Send Away The Tigers) and “post-punk” albums (from The Holy Bible to Journal For Plague Lovers), the Manic Street Preachers are a kind of schizoid cross between Magazine and Van Halen, between Guns N’Roses and Wire. This time round, as befits the Law of the Manics, it’s time for a glam record, which, since it’s their 10th album, is also their biggest-sounding yet.

Most bands, 10 albums in, are doing a U2 and trying to remember why they sounded good in the first place. The Manics were doing that on their debut album, and have moved on. For a band so steeped in their own and everyone else’s rock mythology, they’re very good at making unselfconscious music. Even the presence of John Cale and Duff McKagan doesn’t faze them – although Ian McCulloch’s duet with James Dean Bradfield is seamed with deference. Or, as Nicky Wire puts it, “It’s like James is the girl and Ian is the man.”

Postcards From A Young Man – Tim Roth on the front – doesn’t just have backing vocals, it has gospel choirs. It doesn’t just have strings, it has orchestras. And instead of choruses, it has whole nations taking to the streets. Well, almost. There are few moments of reflection here. Good God, there’s even a Waterboys tribute. But none of which means that this is a pompous, or bloated record.

Taking its musical cues from Dennis Wilson and Echo And The Bunnymen, the band remain human underneath the sturm and bang and always make sure that, in among the fire and thunder, there are songs, and emotion and, as ever, extraordinary lyrics. (The sweeping “Hazleton Avenue” is, brilliantly, not a song about blighted lives in suburban boulevards, but having a few moments to yourself on a Canadian street.)

The Manics haven’t sounded this confident since “Motown Junk”, when they were probably only pretending to be confident. The opening track, and single, “(It’s Not War) – Just The End Of Love”, may be a slight carcrash of typography, but it’s one of the band’s best singles, with all the epic tension and compact intimacy of James Dean Bradfield’s extraordinary performance style. And then there’s “Some Kind Of Nothingness”, written by Wire and a darkly lovely flipside to “Some Kind Of Bliss”, the song the Manics wrote for Kylie Minogue. Ian McCulloch’s vocal sits inside the song like several bears awaiting their moment of revenge.

Some advance write-ups have mentioned Queen and ELO and while those bands might be in the Manics’ mental mix, thankfully nothing of that rock-mocking slush turns up here. Instead we get tributes to Mike Scott, quotes from JG Ballard, splendid instructions (“Don’t Be Evil” is my song title of the year) and the big, big sound, all underpinned with decent tunes and the Manics’ own unique sense of imperial intelligence – and, ooh, you better hang around for the last five seconds of the title track because it’s a quarry-buster.

I look forward to hearing this record and its attendant singles a lot through the rest of 2010, seeing the band tour it (the Manics, unlike many of their peers, are unafraid to actually perform lots of their new album live). And, of course, its inevitable post-punk follow-up.
David Quantick

Q+A Nicky Wire
You’ve said yourself that the Manic Street Preachers only make two different albums, glam ones and post punk ones. This one’s very glam.
I think it was Evelyn Waugh who said you ever only write two great novels and then you just write different versions of them. And we’ve come to accept that. They are the two styles we inhabit, the glam one and the post-punk one. To be honest, I’m blessed that we can do two. Some bands are stuck with one style for ever.

The band have seemed revitalised since you and James both did your solo albums.
Yeah! On this new record I’ve written three of the tunes. I’m chipping in, in my George Harrisonesque way. Doing the solo albums had two effects: it made us miss the band, and made us find our own voices, but we’d much rather be doing it together. And Sean’s trumpet-playing is a lucky charm. We’re trying to get him to do a trumpet solo live, just keeping the bass drum going with one foot. But he’s not having it.

Ten albums in, are the Manics now a classic rock act?
There’s such a back story with us, but when you strip it all away, we’ve become pretty good songwriters. We feel like we’re defenders of the art of rock! The album was conceived as a ’70s record produced in the ’90s with a modern digital edge. The last record was a tribute to Richey – this is a tribute to The Album.
INTERVIEW: DAVID QUANTICK