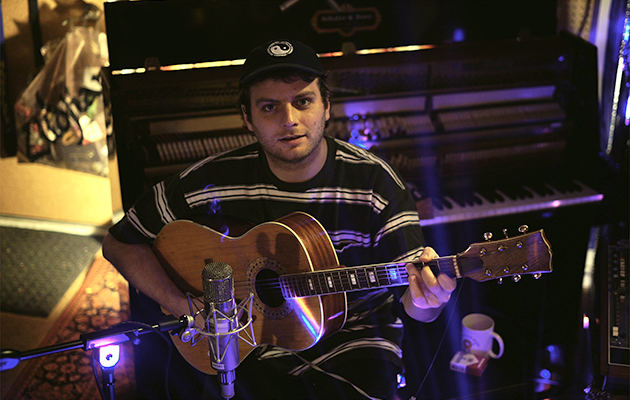 Every artist contains a multitude of selves, a good many of which may not be on speaking terms with each other a lot of the time. Efforts must nevertheless be made to maintain some kind of coherent identity – after all, there may be no worse sin in the age of Instagram than having an inconsistent brand.

Yet there are some people who feel quite comfortable about being one of Kris Kristofferson’s walkin’ contradictions. As both a craftsman of growing sophistication and a dude who’s always ready to be his own punchline, Mac DeMarco could be modern music’s most bewildering and endearing example.

There are moments on the Canadian’s fourth album of such grace, simplicity and sweetness, they could only be created by a singer and songwriter of the utmost sensitivity and maturity, one who’s able to look deep down into the murkiest crevices of his heart and find the most direct means of expressing what he found. On Here Comes The Cowboy, the most affecting results of this continual process of excavation include “K”, an achingly sincere addition to DeMarco’s exquisite canon of ballads for his girlfriend, and “Skyless Moon”, one of several more darkly hued songs that suggest that when it comes to his taste in early-’70s troubadours, the 28-year-old may now have less of an affinity for James Taylor’s casual ease and more for Nick Drake’s stark desolation.

Such songs add further nuance and texture to the more melancholy sensibility that strongly emerged on 2017’s This Old Dog. DeMarco demonstrating a new power and depth in his writing, songs like “Dreams Of Yesterday” and “Moonlight On The River” saw him explore the confusing welter of emotions he felt upon seeing his estranged father on what appeared to be his deathbed. (The singer admitted to feeling even more confused when his dad’s health rebounded.)

If Here Comes The Cowboy contained nothing but these moments, it could’ve easily earned DeMarco the respect he’s due from the doubters who view him as a fun-loving, beer-swilling goofball who’ll do whatever it takes to keep an audience entertained (and do it minus his pants). Of course, that other Mac came to this party, too. He even brought his gong.

As heard in “Choo Choo” –  an irresistibly daft, cod-funky mid-album exercise in comic relief that also gives DeMarco the opportunity to do a steam-whistle impersonation – the telltale reverberations of the golden king of percussion instruments are another indication that he’s not so eager to leave childish things behind. He’d rather have an outlet for his cheeky, occasionally juvenile sense of humour, which is also discernible in the new album’s abundance of cowboy kitsch. The opening track entails him repeating the album’s name in a corny drawl – elsewhere, he sings of “pretty cattle”, hopping trains and a sweetheart who’s unsure whether to stay down on the farm. While DeMarco’s abiding love of shtick may frustrate the admirers who recognise his capabilities, Here Comes The Cowboy is the strongest evidence yet that his many selves can coexist in a surprisingly harmonious manner.

Indeed, it shows a growing courage on his part to let those contradictions be so plain to the ear. That’s down to the spare, relatively unadorned style DeMarco chose for the mostly subdued songs he recorded in January in his Los Angeles home studio with the help of his touring sound engineer Joe Santarpia. (Drugdealer’s Shags Chamberlain and Alec Meen of DeMarco’s live band provided further assistance.) Whereas DeMarco lent a smeary, smudgy quality to the sounds on his 2014 breakthrough Salad Days by multi-tracking his vocals and using varispeed tape effects and other tactics, he’s largely content to leave well enough alone here. The layers upon layers of synthesisers that made This Old Dog standouts like “On The Level” so shimmering and sumptuous have also been reduced to more modest levels.

All that marks a dramatic shift for a musician whose early releases were steeped in a particular late-’00s strain of lo-fi maximalism, when DeMarco antecedents like Ariel Pink slathered everything they touched in reverb and anything else they could use to simulate the sound of a chewed-up cassette tape. Instead, on songs like lead-off single “Nobody”, DeMarco leaves ample space between the few elements he uses besides his forlorn vocals: a loping beat, a few plucked guitar notes, a burbling synth that struggles to stay in tune.

The new album’s bare-bones production aesthetic may not be hugely surprising to listeners familiar with last year’s Old Dog Demos and the other collections of early-draft recordings that DeMarco has released as stopgaps between his albums proper. But there’s nothing rough or tentative about the performances here. For one thing, his singing has never been more expressive. On “Preoccupied” and “Heart To Heart”, he shifts back and forth from a lazy murmur to a sultrier croon with a new-found finesse. The spare setting also gives new prominence to the emotional vulnerability that he’d previously preferred to obscure, as well as the thornier feelings that he used to only hint at or hide inside wisecracks.

Longings for home fill many of the songs, as befits the wandering-cowboy motif. Out on the range, our hero contends with a deepening darkness. On “Nobody”, he calls himself “another creature who’s lost its vision”. The good cheer in the ragtag-singalong “Baby Bye Bye” belies the bitter edge in the lyrics: “Another night you don’t sleep at all/You lay awake waiting for her call/But it never comes and it never will”. An equally fraught successor to This Old Dog’s poignant “Moonlight On The River”, “Skyless Moon” charts a loss of hope and time spent too carelessly. “No-one wants you singing along,” DeMarco sings before making a high lonesome sound of his own.

Since the mood sometimes threatens to grow too heavy, listeners may feel supremely grateful for digressions that might’ve seemed self-indulgent if they weren’t so crucial for the balance of elements and emotions here. In other words, Here Comes The Cowboy needs the big lovey-dovey burst of “K” just as much as it needs the nutty levity of “Choo Choo”. Another dose of loping, whacked-out funk, “The Cattleman’s Prayer” provides the silliest of codas. “Yee-haw!” cries DeMarco before unleashing a series of cackles and  a closing, “Get along, li’l doggie!” It’s a fitting final flourish for an artist who’s unafraid to seem ridiculous if it gets him to where he wants to go. The result is an album that’s braver, weirder and richer than most of his more sensible and brand-conscious peers could ever manage.