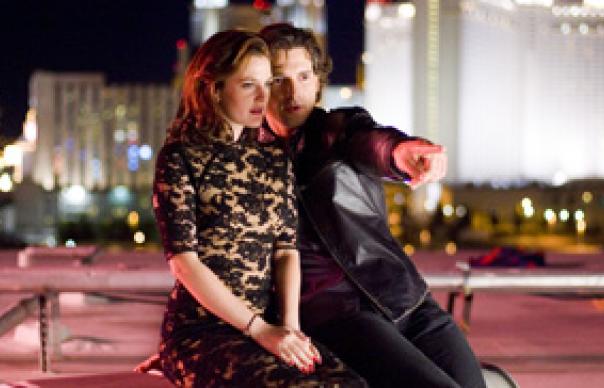 Huck Cheever (Bana) is a Las Vegas poker player whose luck is running out. To get himself out of debt, he aims to win a high-stakes national poker tournament, unaware that his estranged father, legendary gambler LC Cheever (Duvall) is also entering. When he meets smalltown waitress Billie Offer (Drew Barrymore), Huck thinks he’s found another meal ticket to help him get there, but he soon finds himself falling for her innocent charms…

Lucky You is the kind of film Hollywood doesn’t want to make anymore. A freewheeling character study of gamblers attending the Poker World Series in Las Vegas, the film contains no costumed superheroes, no witches or wardrobes, and at no point in the proceedings do spaceships pirouette gracefully into the heart of a dying sun. It’s a throwback to a more serious time in American cinema history, when relationships were incomplete, raggedy things, not just a means to a million-selling Celine Dion single. With the Summer months dominated by brash and excitable blockbusters, a movie like Lucky You stands out by virtue of its sober, thoughtful style and calm cleverness.

It’s perhaps no surprise that the director of Lucky You is Curtis Hanson, a director whose career high-water marks have been placed squarely outside the mainstream. LA Confidential was the best work of neo-noir since Chinatown or Farewell My Lovely, while Wonder Boys bravely flew in the face of movie industry dumbing-down through a stack of literary references and jokes. Lucky You is set in 2003, a time when the rise of virtual poker on Internet casinos began to supercede the physical card game, in much the same way that CGI blockbusters brought to an end the era of directorial autonomy enjoyed by Scorsese, Altman, Coppola, Bogdanovich and Ashby.

Eric Bana’s Huck Cheever is a throwback to the archetypal Seventies’ anti-hero. He’s a liar, a thief and cheat, full of self-destructive impulses and suppressed anger, but he’s smart and driven by his transcendent calling at poker. In the neon Rome of Vegas, Bana’s restraint and subtlety make him that rare thing: a human being darting between the jackpot junkies of Caesar’s Palace. Of course, Huck has issues – pretty much all centred around his relationship with father LC (Duvall), a legendary player but a lousy dad who walked out on Huck and his mother in the dim and distant.

We first meet Huck in a Vegas pawnshop, hocking choice items from a digital camera to a family heirloom, before working his way round the poker tables, trying to scrape together the $10,000 entry fee to the World Series tournament with its promise of a $2.5 million jackpot.

Lucky You invites inevitable comparisons with other poker movies – The Cincinnati Kid, The Hustler, California Split and The Gambler. If this seems like high stakes, Bana holds his own in the company of McQueen, Newman and Caan; his strength is in his not-trying, and the persuasive honesty of a natural performance. Huck is so complex a character that when smalltown waitress Billie Offer (Barrymore) crosses his path, a country girl with a roll of dollars, the prospect of an affair actually seems it might dilute his story, not take it somewhere else.

Instinctively, Hanson seems to back away from this love story almost as soon as he’s started it, and for its final third Lucky You becomes an affecting men’s melodrama, with Hanson taking almost agonising pains to show the method and machinations of Texas Hold ‘Em. The attention to detail (Hanson is himself a poker player) is formidable, and the forensic detail with which he explores the various twists of a game is more gripping than you might expect, while the most bizarre cast of character actors gather round the green baize, to bet, play and watch. For a while, it seems like Hanson is going full-tilt to recreate the kind of idiosyncratic Americana that was being made on the Universal lot in 1971.

Perhaps symptomatic of this is a fleeting but entertaining cameo by Robert Downey Jr, playing a phone-scam artist who counsels gullible callers to his elaborate network of 1-800 numbers simply to fleece them of their premium rate charges.

The most obvious link to the classic Seventies cinema that Lucky You aspires is the casting of Robert Duvall, one of that generation’s most treasured supporting actors. LC Cheever, maybe like Duvall himself, is a relic from another era, rough-hewn and graceful, the kind of man who really could be disappointed in a son like Huck. When LC first appears in the movie, sitting down at a table with Huck, the tension between the two men is vivid; their conflict becomes the film’s motor.

Hanson also has Bob Dylan on board. Dylan wrote the Oscar-winning “Thing Have Changed” for The Wonder Boys, and here contributes a new song: “Huck’s Tune”, a folky, blues number that’s his first new material since Modern Times. Hanson’s said that he wanted to work with Dylan since seeing him act in Sam Peckinpah’s Seventies’ Western Pat Garrett And Billy The Kid – now he has the good fortune to be the only director for whom Dylan has specifically written songs.

Since LA Confidential and Wonder Boys, Hanson has floundered in muted pseudo-genres, trying his hand at the rock biopic with 8 Mile and the women’s picture with In Her Shoes. Certainly, compared to his two career highs, Lucky You comes up slightly wanting – an intriguing if slightly disappointing curveball from a director whose style refuses to cohere.