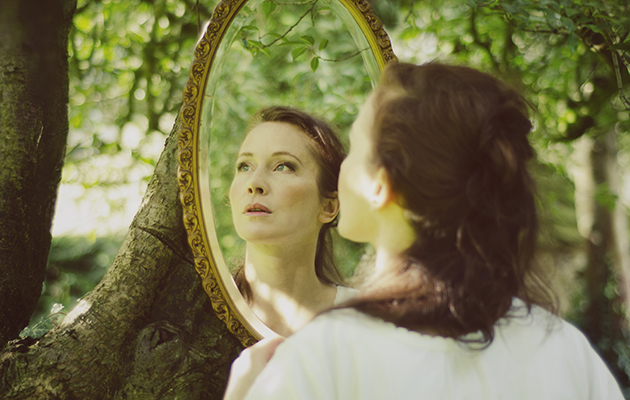 On the evidence of her fourth solo album, Lou Rhodes would have fitted in pretty well with the Laurel Canyon crowd, hanging out on a verandah with her guitar, expounding on ecology, the life trip and universal love in the company of Joni, Judee and Stephen Stills.

Her previous records – including 2005’s Mercury-nominated debut, Beloved One – have featured lean, acoustic finger-pickings with folk/blues inflections and subtle strings, in songs drawing from a deeply personal well of emotion, Rhodes’ warm, tremulous voice their focus. Top marks for understatement, even if at times there’s been rather too little going on, but with theyesandeye, Rhodes has opted for a more resonant and expansive analogue sound, mixing early ’70s Californian folk with dreamy English pastoralism of the same period. Harp, double bass and synth are key, but a wide range of instruments is used, along with reverb, echo and multi-tracking. Lyrically, nature looms large, along with the love and unity that have always been Rhodes’ themes – even in her work with Andy Barlow as Lamb, the ’90s electronic duo whose best known track “Górecki” brought together the Polish contemporary classical composer and a broken beats/forlorn vocals fusion, in the service of Guinness promotion.

Rhodes started work on the new record – whose title is her misreading of the name of a painting, that spoke to her newly positive mindset – in 2013, but was sidetracked by another Lamb album (2014’s Backspace Unwind) and subsequent tour. She described juggling those demands to Uncut: “Sometimes I feel pulled in very different directions by these two incarnations; it’s like have two children that both need feeding, but one shouts a lot louder than the other.” Last year, the solo Rhodes shouted loudly and co-producer Simon Byrt, who she’d met by chance, responded. She had a set of songs but was unsure of where to take them, although intuition was leading her toward “a slightly psychedelic feel.” Byrt’s role was vital. “Apart from his vintage echo obsession, Simon has a unique musical ear and is a remarkable multi-instrumentalist,” reckons Rhodes. “His piano playing and use of melody is something else and so there was a really magical interplay between the two of us. He was also hugely supportive of my writing process and we wrote a couple of the songs together in the studio.”

theyesandeye is short (11 tracks in just 35 minutes), but sweet and sensitively judged, balancing the heady fulsomeness that orchestration and studio effects bring with playing restraint and the need for open spaces. It begins with “All The Birds” and the plaintive cry of seagulls, which is echoed in the song’s freewheeling rhythmic propulsion and Rhodes’ husky, multi-tracked vocals – when combined, a reminder that Nick Drake is still very much a touchstone. Drake’s influence is there too on the darker “Them”, where piano, strings, soft drum rolls and the gentle throb of double bass provide the backdrop to an examination of our compulsive need to blame: “One finger points away, the others point right back,” Rhodes sighs. There are echoes of John Martyn in the contented “All I Need”, while the sombre “Never Forget” (“an older song harking back to unhappier times,” she explains) channels Ralph Vaughan Williams’ “The Lark Ascending”.

Trilling harp, cello and seductive 3D space notwithstanding, the call for ecological responsibility that is “Sea Organ” is the set’s least convincing moment, its message couched in ’60s hippy-speak: “All at once our eyes are open and our hearts can feel the weight of all the damage we have done; just as if the earth had spoken in a voice so real – ‘come to me, children, for we are all one.’” Still, it’s a personal expression and one clearly made in good faith. It follows the album’s unexpected punctum – a cover of The xx’s “Angels”. The original is hardly an in-your-face assault and so a difficult song to reinvent without destroying its emotional power, but Rhodes and band have recalibrated its ghostliness via a finger-picked guitar opening and outro, delicate violin, ripples of harp and cavernous vocal reverb.

If it can’t claim to stretch the boundaries of contemporary alt.folk, then theyesandeye hits its own modest target – a quietly eloquent, simply persuasive record that chimes well with the current taste for bucolic abstraction, and moves Rhodes forward.

Q&A
Lou Rhodes
How do you see the LP in contemporary folk terms?
In terms of influences, I guess what was firing me up was that spacious, 1970s Californian sound and this was a big part of why I asked [avant-folk sound architect] Noah Georgeson to mix. So, the result is a kind of transatlantic feel with a few English folk roots showing.

What made you cover the The xx’s “Angels”?
I guess you could say it’s a bold move! I just love the song. I rarely do covers, but I just had a yearning to do a version of this song in a totally stripped and acoustic way. I think if you’re going to cover a song, you have to turn it on its head a little. Romy [Madley Croft] got in touch via mutual friends and said she loved it, so that made me happy.

What’s the idea behind “Sea Organ”?
I randomly heard this sound that was made by an architectural structure under the sea in Zadar, Croatia, which makes these outlandish sounds when waves wash over it. I took a sample of it into the studio and that was the basis of the song. I don’t really pre-plan lyrics, but what came out was a bit of a homage to Earth and the way we’ve messed around with her. In the end, the sample didn’t really work when we tried to vary its pitch, so we replaced it with layers of cello, harp and guitar – but it’s still there in essence.
INTERVIEW: SHARON O’CONNELL