Lost On The River: The New Basement Tapes

A forgotten box of Dylan's lyrics from 1967, set to music by Elvis Costello, Jim James and more... 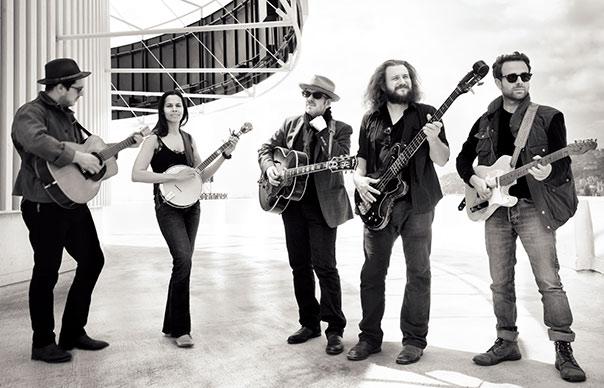 A forgotten box of Dylan’s lyrics from 1967, set to music by Elvis Costello, Jim James and more…

Instigating The Lost Notebooks Of Hank Williams project may have jogged Dylan’s memory regarding the whereabouts of some of his own back pages. Shortly after the album was released, T Bone Burnett, the ubiquitous enabler of American roots music, received a call from Dylan’s publishers revealing the discovery of an entire box of words, dating from 1967, which Dylan had apparently forgotten even existed. Would Burnett, a friend since the days of Rolling Thunder in the mid-70s, care to do something with them?

Because the lyrics were contemporaneous with the Basement Tapes, Burnett duly assembled a modern-day approximation of The Band in the form of Elvis Costello, My Morning Jacket’s Jim James, Marcus Mumford, Taylor Goldsmith from Dawes and Rhiannon Giddens from Carolina Chocolate Drops. The group of all-singing multi-instrumentalists convened for two weeks to transform lost scraps into living songs, working as an ensemble and taking lead vocals on three tracks each.

The unveiling of these 15 ‘new’ basement-era songs (20 on the deluxe version) coincides with the release of The Basement Tapes Complete, an exhaustive six-disc excavation of the wild, woolly treasure trove of originals, covers, standards, country, blues and folk songs recorded by Dylan and The Band in the basement of Big Pink in 1967. It’s entirely typical of Dylan that, even as one hand is flourishing what is being billed as the royal flush of unexpurgated Basement recordings, the other is shuffling yet more mystery and intrigue into the deck.

In truth, the shared DNA between Lost On The River and the original Basement Tapes can appear negligible; the departure points for these songs are often inauspicious. It’s not hard to divine, for instance, why Dylan might have quickly lost interest in the generic love lyric of “When I Get My Hands On You”, which Mumford turns into a creeping soul number with a staccato violin pulse, or the lovelorn whimsy of “Florida Key”. Even the most routine songs, however, convey some glimmer of an extraordinary imagination at work. “I want a Tombstone pearl-handled revolver,” runs a line in the otherwise unremarkable “Stranger”. “I want to meet a pale man with a halo in his hair.”

Other songs, such as “Spanish Lady”, clearly arrived more fully-formed. Set to a brooding minor-key melody not a million miles from the traditional “Blackjack Davey”, recorded by Dylan on Good As I Been To You, the words toy with the tropes of countless old folk narratives, with three sailors pondering an existential riddle: “Beggar man, tell me no lie / Is it a mystery to live, or is it a mystery to die?” Musically, it’s an outstanding collective performance, dominated by Giddens’s ominous minstrel banjo and powerful vocal. It aches to be performed by Dylan himself.

Elsewhere, it’s diverting to hear wildly different styles applied to the same words. Written by James but sung with quavering conviction by Elvis Costello, “Lost On The River #12” is a moving if slightly ponderous country-soul ballad which wouldn’t have sounded out of place on Costello’s Delivery Man. A later variation on the same lyric, “Lost On The River #20”, turns the song into the sombre reflection of someone who escaped the madness of being Bob Dylan in 1965 and ’66 and can scarcely believe he’s survived to tell the tale. “The waves they rolled and tumbled over me / I spied dry land and a tall, veiled tree / I knew that soon that’s where I’d like to be.” Sung by Giddens, it’s an eerily beautiful meditation.

Water, women and – oddly – Kansas feature heavily. “Kansas City” is melancholic country-folk with a rousing chorus which finds Dylan, not for the first time, in thrall to a “gypsy woman,” though Mumford’s racked vocals over-egg the sense of unvarnished emotional vulnerability in lines like “you invited me into your house / Then you say, ‘You’ve gotta pay for what you break.’” The same town hosts Goldsmith’s “Liberty Street”, which sounds like a Richard Manuel ballad sung by Jackson Browne. Costello’s take on the same words, retitled “Six Months In Kansas City (Liberty Street)”, is a time-shifting racket which honours the rough-hewn spontaneity of the original Basement Tapes by remaining apparently half-finished.

Such attempts to locate the loose-limbed spirit of adventure that permeated Big Pink in 1967 can’t help but feel a trifle contrived, yet the album largely succeeds in avoiding the pitfall of treating these words with stifling reverence. The hugely enjoyable “Nothing To It” rides a hollering, funky backyard groove all the way from The Band to Hall & Oates, slipping in a deceptively personal lyric as it does so, while “Duncan And Jimmy” and “Card Shark” are light-hearted character songs, the music played high on fiddle, banjo, mandolin and ukulele.

Elsewhere, there are intriguing echoes of other Dylans. Opener “Down On The Bottom” revisits the heartsick prowl of Time Out Of Mind, a slow, swampy evocation of dread – “No place to go but up / Always been in trouble, nearly all my life” – sung superbly by James. Giddens’s scatted backing vocals on the lurching “Married To My Hack” recall New Morning oddity “If Dogs Run Free”, although the song’s boozily unbuttoned demeanour – “Got 15 women and all of them swimming,” roars Costello – is recognisably Big Pink in tone. Best of all is “Hidee Hidee Ho #11”, a joyously slinky thing sung by James with a mischievous leer while Giddens coos in the background. A slow stroll in the moonlight, it recalls the riverboat shuffles of Love And Theft.

What does it all add up to? Lost On The River is an album of good, sometimes excellent songs with a unique creation story which, in the end, adds little of substance to the narrative of perhaps the most mythologised recordings in history. As footnotes go, however, it’s an entertaining, energised and often fascinating one.
Graeme Thomson

Q&A
T BONE BURNETT
How did this project get off the ground?
Bob Dylan’s publishers called up and said that they had found a box of lyrics from 1967 and would I be interested in doing something with them? The idea of collaborating with a 26-year-old Dylan with 50 years of hindsight was intriguing. It was Bob’s idea, it was clear that he wanted this to happen.

What kind of state were the words in?
Mostly handwritten, some typed, there were drawings on some pages. They weren’t all written out strictly as finished songs. Some had three or four verses, a chorus and a B section, and some were just three blues verses, or notes. They were all different. I didn’t pore into the lyrics incredibly deeply, I wanted it to happen more in the studio rather than preconceive something, but the first read through was pretty humbling. You know, how many beautiful lines he’d written and left behind. Over the past 50 years, who knows how much stuff he’s got lying in boxes? Terrifying!

Did part of you think, ‘Hang on, these are your words – finish the job yourself!’?
[Laughs] Well, he famously said, Don’t look back. I think he knows that I’ve done lots of period films and I understand different eras of music, and my guess is he was intrigued by what people could do with these words now.

How did you choose the musicians?
I was looking for people who could all sing and play multiple instruments in their own right, as well as being band leaders. People who I knew to be collaborative. It wouldn’t have done anyone any good for someone to come in and try to own it. The idea was not to try and take it in any direction, but let it find its own course.

How did the practicalities work?
[Dylan] had identified 16 songs initially, which I sent to each artist. Some people decided to write things and some people decided to wait until they got to the studio and collaborate. I didn’t give anybody instructions, it was a bit of a free for all. Then just as were starting in the studio the publishers sent eight additional songs. “Nothing To It” was one of those, “Six Months In Kansas City”, too. Almost all of it was hammered out in the studio, very quickly. Most of them are one or two takes, with everybody playing on each other’s songs, sometimes on their second or third instrument, to keep that devil-may-care attitude alive. I think the fact that Bob was so generous with the lyrics encouraged everyone else to do that.

Are all the words we hear written by Dylan?
I would say more than 90 percent of what you hear are Bob’s lyrics, but it was an archaeological dig. Someone might find an arm bone over here and put it with a shoulder bone over here; I think Elvis wrote two or three lines on “Lost On The River”. We took liberties, but I don’t think we did violence to anything. We stayed true to what was going down in the first place.

How would you define the relationship between this record and The Basement Tapes?
The relationship is between the intellect that began both of them, and his way of looking at life and the world. I’m not a scholar of this stuff. Bob is a friend of mine, a man who I love, and I feel I understand him in ways that not many people do – I feel Bob, if you know what I’m saying! But I’m not a Dylanologist. I’ve never listened to the complete Basement Tapes, for instance. We’re not trying to replicate the sound of The Band and Bob in 1967, but we tried to stay true to the spirit of it, which was not to overwork the thing.

Will there be more?
Hopefully there will be a second volume, because there was some 40 odd songs recorded. We have several versions of all of these songs – four of five versions of some. There’s another album that could be finished quickly, and it’s equally as good and interesting and different. It turned into a wonderful band, so it would be exciting to take it out on the road. It could be a wild show.

Did Dylan take an active interest?
He just left us to it. He was mixing his own record in the next room at the same time, so he was there as a presence for us, but he didn’t intrude at all. I think he was happy to let us have our way with this stuff. I’ve had feedback since it’s been finished, and it’s been positive.

Any gossip about his new album?
Maybe I’m not supposed to say anything, but I’ve heard it and it’s stunningly beautiful. He does these old standards, and it’s gonna flip people’s wigs when they hear him to do these songs. It’s like Debussy or something. It’s not like Woody Guthrie, but it’s not lush either. It’s just high, high, high.
INTERVIEW: GRAEME THOMSON