Long Blondes – Someone To Drive You Home 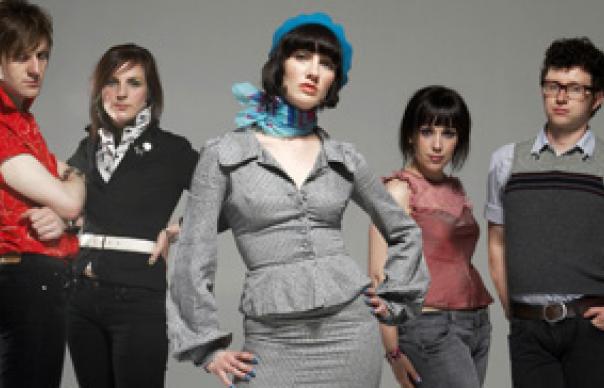 The long-running press campaign on the Long Blondes’ behalf spoke to a cherished critical fantasy. If we’re determined to run with BritPop II – with the Kaiser Chiefs as Blur, and the Monkeys as Oasis – then can we at least have a new Pulp? The Blondes certainly seemed to fit the bill: rakish heirs to Sheffield’s shabby chic, classy aspirants to the standards of Bacharach, articulate pop swots in a stage school world.

But with their debut album, the campaign promises end and the reckoning begins. “I just want to be a sweetheart!” yelps Kate Jackson, invoking Edie Sedgwick and Anna Karina on opening track “Lust In The Movies”. She’s a fabulous frontwoman, with no time to play anyone’s muse. Across 12 tracks she casts herself as desperate housewife (“Company Of Women”), louche agony aunt (“Once And Never Again”) and jealous also-ran (“You Could Have Both”) and fair tears up the scenery: urgent, passionate, determinedly defiant.

So much so that her bravura performance threatens to overwhelm the band. At times here it feels like Debbie Harry took a wrong turn on the way to Studio 54 and wound up with Shed 7. Like Human League and Pulp before them, the Blondes aim to skip lightly from the kitchen sink to the sublime, but they often struggle to make the leap. In this context, “Giddy Stratospheres” – along with “Weekend Without Make-Up” one of the strongest songs here – seems like harsh self-diagnosis: “She’ll never take you higher than her attic room”.

Within the context of Razorlight or Kasabian, “Someone To Drive You Home” is clearly the work of lively, stylish minds. What’s frustrating is that they are evidently aiming so much higher. To make good on their ambitions it may be that they need to hook up with a properly ruthless pop producer, one who can coax them out of their indie-pop dowdiness – like Blondie needed Mike Chapman, like ABC needed Horn. Otherwise, the Long Blondes may have to be content to be this season’s Elastica.