A collection of dyed-in-the-wool misfits, The Hoovers, head cross-country for the Little Miss Sunshine beauty pageant... 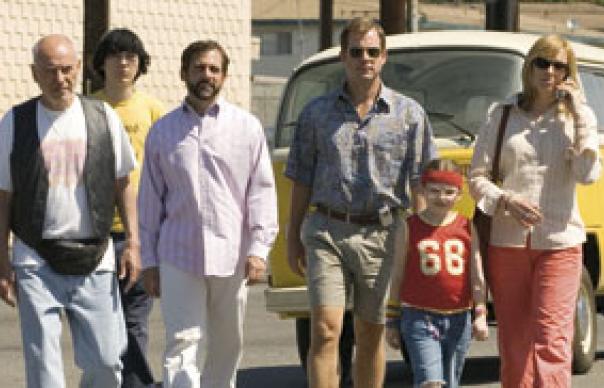 You’ve met folks like the Hoovers before in the movies. A collection of dyed-in-the-wool misfits, their antecedents include the Griswolds, stars of the National Lampoon’s … Vacation series, Wes Anderson’s Tenenbaums and many others in between. In truth, the dysfunctional family comedy feels a little exhausted these days, as anyone who’s had the misfortune to see Robin Williams’ latest outing, the dire R.V, will know all too well. But what makes this one fly is its warmth. Little Miss Sunshine is a first class love-letter to a family of losers.

Let’s start with lecherous, potty-mouthed Grandpa (Alan Arkin), recently shown the door from his retirement home thanks to an abiding love of heroin. There’s Richard (Greg Kinnear), the nominal head of the family, who’s an appallingly unsuccessful motivational speaker. Wife Sheryl (Toni Collette) struggles against the odds to hold her brood together, and the strain is beginning to show. Stroppy teenager Dwayne (Paul Dano) has taken a vow of silence and spends all day reading Nietzsche. Gay uncle Frank (Steve Carell), a Proust scholar no less, has just been released from hospital after a suicide attempt. So far, so fucked-up. And then there’s Olive (Abigail Breslin), a chubby, bespectacled seven year-old with sweet, innocent dreams of one day becoming a beauty queen. Meanwhile, the rest of the Hoovers bicker, bite and squabble among themselves – except Dwayne, who simply leaves notes for his family bearing such heart-warming sentiments as: “I hate everyone” and, when uncle Frank arrives in the house, one which reads: “Welcome to Hell”.

There really doesn’t seem much to like about them – until, by some miraculous turn of events, Olive is chosen to take part in the Little Miss Sunshine kids’ beauty pageant in California and the Hoovers find at last something to unite them in a common cause. They head off in a battered VW camper van from Albuquerque to Redondo Beach, determined that at least one of their clan will achieve something they can all share joy in.

The journey – three days cross-country – is rich with comic incident as well as one fatality that feels like an explicit homage to National Lampoon’s Vacation. It’s during this crucial section of the film that first-time screenwriter Michael Arndt gently teases the humanity out of the Hoovers and the film opens up to become more than a quirky, by-numbers family comedy. Arndt, along with former music promo directors Jonathan Dayton and Valerie Faris, steer the Hoovers into a place where, gradually, little moments of love and affection seep through the bitterness. You’re reminded of the way America’s First Family of freaks – the Simpsons – are held together by familial bonds, that their differences from “normal” folk are what make them special and that, ultimately, is what they’re proudest of.

This gets brought into shocking relief by the jaw-dropping third act. As the Hoovers crash into the Little Miss Sunshine pageant, as welcome as a skunk in an elevator, the film becoming a scabrous satire on American concepts of success, perfection and happiness. There’s something grotesque about the American beauty pageant tradition – the pushiness of the parents, the disturbing way the competing children are dressed to look like women in their swimsuits and full make-up – which Arndt clearly relishes demolishing in a way that’s simultaneously uncomfortable to watch and deeply funny. As all these perfect children and their perfect parents rush around getting ready for the contest to begin, dumpy little Olive (a guileless performance from Breslin) experiences a moment of clarity in which she realises she can never be as beautiful as them. Yet that makes her all the more determined to see through to the end the – for want of a better word – extraordinary dance routine Grandpa taught her. At which point, it’s safe to say, The Daily Mail and other self-appointed guardians of our nation’s morals will be spitting blood.

It’s become de rigeur for this kind of ensemble movie to attract marquee name casts (think of the incredible talents who appeared in similarly themed movies like The Royal Tenenbaums, Igby Goes Down and The Squid & The Whale), and Dayton and Faris are equally blessed here. You expect pros like Kinnear, Colette and Arkin to deliver, but the key player here is Steve Carell – star of the American version of The Office, whose movie CV to date is headed up by Anchorman and The 40 Year-Old Virgin. You sense, in his quiet and unshowy way, Carell is genuinely exploring Frank’s alienation; his performance crucially suggesting a great comic actor in the making, rather than a comic simply trying his hand at acting for a lark.