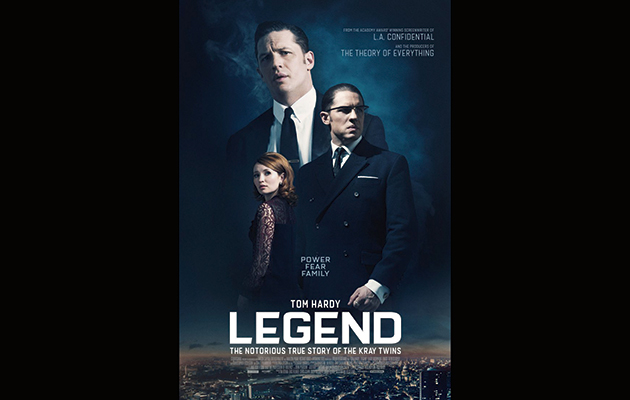 For an actor like Tom Hardy, who specializes in colourful, larger-than-life roles, Legend is a dream gig. Why? Because not only does he get to do the things Tom Hardy is historically good at – violence, an accent, bulking up, more violence – but here he does it twice. Thanks to some ‘How did they do that?’ digital business, Legend finds Hardy playing both Ronnie and Reggie Kray.

He plays Ronnie as a kind of autistic psychopath: slicked back hair, thick-set mouth, perpetual frown, stunted speech patterns. Weirdly, he looks like Patrick Marber. As Reg, he is a dashing jack-the-lad; socially engaged, a charmer, up for a bit of banter with both the ladies and the police who follow him everywhere. Reg entertains ideas of running a legitimate business; alas, if only his brother wasn’t such a deranged maniac… Out in his mucky caravan in the woods, meanwhile, Ron’s principle interests are young men and killing.

Admittedly, the Krays story has been well-told before; but not like this. Hardy has an incredible physical presence – even in films like Tinker, Tailor, Soldier, Spy or Locke, where he is not required to actually kill anyone, he strains to contain himself. In Legend, Reggie moves like a big cat; muscle and sinew. Ron is a blunter instrument altogether. Even the cheery offer of a cuppa could end badly for someone. But Hardy aside, the fresh spin of Legend is that this is essentially the wife’s tale: Frances Shea (Emily Browning). It is Frances who provides the film’s voiceover, and who is central to Reg’s plan to go legit. We experience the gruesome business of life in the Krays orbit from her perspective.

Legend is written and directed by Brian Helgeland, who also wrote the screenplay for LA Confidential; a film that broadly covered similar ground. His work here is sharp, observant and mercifully he avoids the usual filmmaking clichés of depicting London. He casts well, too. Christopher Eccleston, Paul Bettany, David Thewlis and Taron Egerton do solid work in supporting roles.