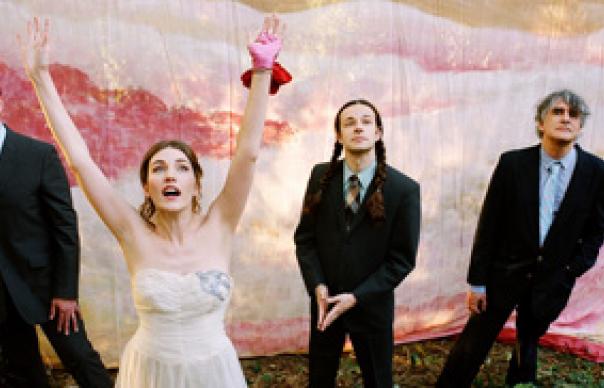 First of all, should you have any hesitations about adoring a band who describe their music as “The original sound of love!” on their MySpace profile, and who call their fans “children of peace,” you might want to turn back now.

But do so knowing that you’ll be missing one of the most charming, quietly stunning debuts to emerge from the California indie scene in quite some time. Lavender Diamond, an L.A.-based quartet led by the winsome, wind-chime-voiced Becky Stark, weave mesmerizing sonic spells out of little more than piano, spindly guitar, tambourine and drums.

The sprite-like Stark started her career as the star of a touring musical play she wrote called Bird Songs of the Bauharoque, and Lavender Diamond’s live shows are notoriously theatrical—she wears frou-frou dresses and fairy wings. But, like the band’s excellent “Cavalry of Light” EP released earlier this year, (i)Imagine Our Love(i) is decidedly understated.
When strings and brass occasionally appear, as on “I’ll Never Lie Again” they can’t compete with the show-stopping resonance of trained-opera-singer Stark’s crystalline soprano. The band’s less-is-more policy extends to the lyrics, aswell. Slight and forcefully repetitive, they coil and uncoil from verse to verse, augmenting the songs’ hypnotic beauty.

Yet within this simple framework, Lavender Diamond manage terrific breadth and agility. “Garden Rose” sounds like an old Appalachian love song (as well as calling to mind a few tracks off of Jenny Lewis’s solo album), “Open Your Heart” gleefully skips along on hand-claps and coaxing, schoolyard-chant-cadence verses (“When you have to go/Where are you running to?”). “Like an Arrow”, meanwhile, suggests vintage Kate Bush.

The songs are mournful and strange; they probe the dark spaces love leaves in its absence, but they also possess an open-hearted, beguilingly naïve, unwavering optimism that those spaces can and will be filled. The combination is irresistible.