A timely testament to change 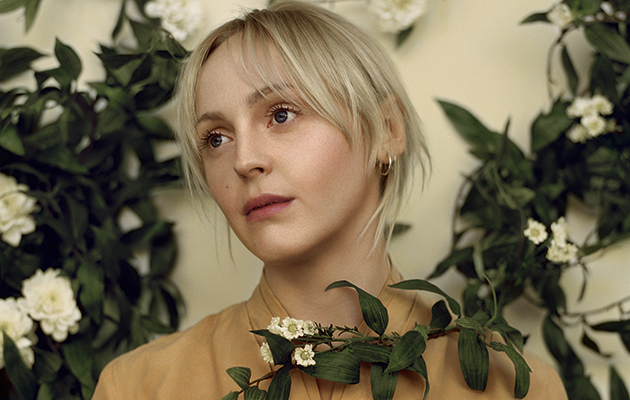 The title of Laura Marling’s new album – which loosely translates as ‘always a woman’ – is taken from Virgil’s The Aeniad: “Varium et mutabile semper femina”; “a woman is an ever fickle and changeable thing”. It’s a crude but apt summation of Marling’s determination as an artist to present a moving target. Semper Femina is her sixth album in nine years, the kind of old-school work ethic which complements an equally old-school creative sensibility. Having emerged in the slipstream of Mumford & Sons and Noah & The Whale, she long ago freed herself from the entanglements of any scene, other than perhaps an attachment to the golden age of Laurel Canyon’s music makers.

At 27, Marling has assembled an impressive and unified body of work, making subtle adjustments with each step. Once I Was An Eagle (2013) opened with an audacious five-song suite of drone-poems, raw and richly allegorical; her last album, 2015’s self-produced Short Movie, was harder, jittery, more abrasive. Semper Femina is a further refinement of her art, rooted in a familiar cool classicism yet also distinct, the sound warm, intimate and inviting, punctuated with flashes of ragged guitar and adorned with sumptuous strings.

At a time when the Misogynist-in-Chief stalks the Oval Office, the album’s focus on female identity is both welcome and current, even if Semper Femina is nothing as straightforward as a concept album. As well as Virgil, Marling draws inspiration from psychoanalyst Lou Andreas-Salome and Rainer Maria Rilke, and namechecks Courbet’s explicit painting L’Origine du Monde, none of which dispels the notion of her having somewhat rarefied tastes. Though she’s a veiled writer, hinting at intimacy without revelation, the abstract nature of these nine unhurried, often very beautiful songs is partly the point. This is an exploration of femininity in all its variants; in its power, mystery and vulnerability; above all, in its mutability.

Opener “Soothing” is a career highlight. The atmosphere is steamy, malevolent, erotically charged, with echoes of Serge Gainsbourg’s “Melody” and Dylan’s “I Can’t Wait” in the off-kilter, up-ended groove. The serpentine bassline is tilted, while Marling is at her most imperious, decreeing that some prior means of intimate access – “your private door to my room” – is now denied. “I banish you with love,” she sings, her voice swooping from high to low.

This suspenseful, rhythmic magnetism is reprised on “Don’t Pass Me By”, which turns out not to be Marling’s take on the Ringo-penned Beatles clomper from the White Album, but closer to Karen Carpenter singing Portishead’s “Glory Box”. A litany of used-to-bes – old guitars and familiar tunes are taken away and stripped to their component parts, to be transformed “into something good” – it features another gorgeous string arrangement and a hypnotic descending chord sequence, plucked out on echoing electric guitar.

These two tracks are so good, slanted and enchanted, the rest of the record’s achievements feel low-key by comparison. “The Valley” is gentle, almost-ambient folk, a late-summer English pastoral sketched in flickering guitars, stacked vocals and a ravishingly lovely sweep of strings. It’s a fond lament, regretting a breach in female friendship, the realisation that confidences now go unshared. While “The Valley” is quietly heartbreaking, the lightly swinging “Next Time” is merely pleasant. “Nothing Not Nearly” is a sturdier affair, arriving with a crunch of distorted guitar and bearing a passing resemblance to Jeff Buckley’s “Lover, You Should Have Come Over”.

Marling splits her time these days between London and Los Angeles; her music can seem similarly polarised. The smouldering, soulful “Wildfire” has a West Coast swagger, despatched in a rich, deeply satisfying bluesy drawl, perfect for cussing out some poor soul’s mama (“kinda sad”) and papa (“kinda mean”). And “Nouel”, a spritely, fingerpicked pen portrait of a muse figure who “sings along to a sailor’s song in a dress that she made,” hardly shies away from those eternal Joni Mitchell comparisons. In contrast, “Wild Once” is an almost parodic display of clipped, actorly Englishness. Here is Marling at her most mannered, and arguably her least engaging. A loose-limbed tone-poem celebrating atavistic impulses, it’s the one track which doesn’t quite hit home.

“Always This Way”, on the other hand, is disarmingly simple and intimate. In gentle tones, Marling toys with rueful autobiography: “25 years, nothing to show from it…” Well, hardly. Semper Femina – while ultimately not quite the radical re-routing it occasional threatens to be – marks an impressive deepening of Marling’s explorations, and a timely testament to change as a positive force.

Q&A
LAURA MARLING
How fully-formed were the themes before you began recording?
It always becomes clear in retrospect. It was what I was interested in around the time I was writing it, so there was some forethought, but it’s not like a concept album. Without being provocative and political for the sake of it, it feels like that’s what’s happening in the world anyway. I was interested in what truly liberates women and what doesn’t.

How did it come together?
It was made in September 2015. I only really write when I’m touring. I like the energy of travel, and the constriction of having to find a space to write. We went straight from the American tour for Short Movie into the studio. It was mostly all of us performing together, and some overdubby guitar bits with Blake, little fancy things.

You produced Short Movie yourself but used Blake Mills this time. Why the change?
When I was producing Short Movie, I found the results weren’t very good, because I was constantly jumping between two roles. I didn’t enjoy it. I have mixed feelings about Short Movie; it was a difficult record to write, make and tour. I’d heard a couple of Blake’s self-produced records of his own music, and a couple of other things he’d produced, and I thought, ‘He’s my generation’s exciting thing!’ He’s got an extraordinary musical palette that he put into play on “Soothing”, and a few other places on the record. That’s his touch. He is brilliant.
INTERVIEW: GRAEME THOMSON