LAURA MARLING – I CAN SPEAK BECAUSE I CAN 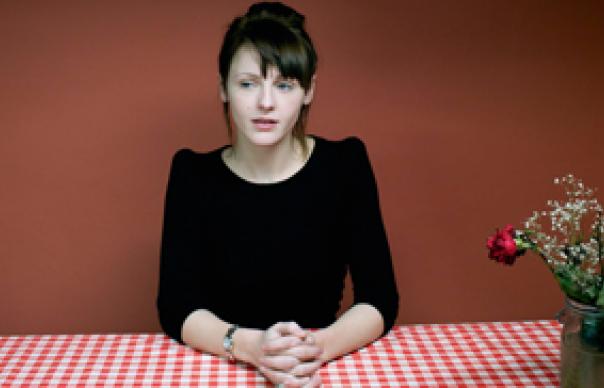 2009 must have been a strange year for Laura Marling.

Although she didn’t release anything herself, she watched her backing band Mumford & Sons outflank the rest of the nu-folk flock and break through to the mainstream with a formula that eschewed rustic introspection in favour of something closer to Coldplay with mandolins.

She also found her love life dragged into the public eye, with the fall-out from her break-up with Charlie Fink of Noah And The Whale splattered all over his band’s endearingly maudlin second album, The First Days Of Spring (sample song titles: “My Broken Heart”, “I Have Nothing”). In fairness, Marling actually came out of the episode pretty well, if she is indeed the girl whose voice Fink claimed could “summon the angels” and whose beauty could “waken the dead”.

Marling limits her response here to the song “Blackberry Stone“, in which she gently admonishes an ex-lover (let’s assume it’s Fink, because everybody else will): “You never did learn to let the little things go… You never did learn to let little people grow”. She does, however, offer closure: “I whisper that I love this night… To your soul as it floats out of the window.”

Accompanied by acoustic guitar and viola, joined only by piano and lightly brushed drums for the final chorus, it’s actually a rare moment of clarity on a “coming-of-age” album where the now 20-year-old Marling – having traded in her waifish blonde locks for a stern, schoolmistress look – seems to be trying a bit too hard to prove herself. Her lyrics are often bound up in unnecessary layers of allegory and riddle, making it hard to gauge the emotional intent beneath.

She starts off promisingly on “Devil’s Spoke”, sounding unusually fervent as she imagines being “Eyes to eyes, nose to nose/Ripping off each others’ clothes”. Second track, “Made By Maid” is equally fine, but for opposite reasons, Laura retelling an old English folk tale, letting the words tumble out ahead of the beat with charming nonchalance. It’s almost as if the quieter tracks allow her to relax, while the full band numbers – fleshed out rather over-eagerly by a group containing several Mumfords and a Whale – subdue and constrain her.

“Alpha Swallows” is a rather oppressive one-chord wallow about wanting to escape from London and the clutches of a destructive relationship. It’s followed by “Goodbye England (Covered In Snow)”, a paean to the Hampshire countryside that Laura instead considers home. It’s a pretty song, but the sentiment veers towards the twee. Elsewhere “Hope In The Air” and “Darkness Descends” juggle handfuls of folk song cliches (mute prophets, lighting candles, leaving when the sun comes up) without anchoring them to strong enough melodies.

We’re not currently short on folky female singer-singwriters, but where Marling has the edge on most of her contemporaries is in the vocal department. Throughout the album, her voice is startling in its casual power and versatility, its Arcadian purity bolstered by a knowing pop confidence. Charlie Fink might have been right about its ability to summon angels. Now she just needs a set of songs that are as compelling as her voice; maybe the fact that she’s already announced another new album for later this year is a tacit admission that she’s not yet the finished article.
Sam Richards

Q&A LAURA MARLING
Which song on the LP are you proudest of?
Perhaps “Made By Maid” – it’s the truest folk song I’ve ever written because it’s a story from start to finish. I heard this old folk tale about a child being abandoned in the woods on the day it was born, and having to raise itself, then years later finding itself in a town and realising it’s totally alien from everyone else. I thought that was a very interesting analogy for how the way you’re brought up and what you know is the only thing that can define you.

Are you more comfortable using fable and analogy that writing directly about your own experience?
I don’t think I’d ever write a word-for-word story about something that happened in my life – nobody needs or wants to hear about that. If I were to write completely first-hand I don’t think I’d be expressing anything other than what I know has already happened.

Why are you planning to release another album so soon after this one?
It’s been a while since the first album, so there’s been a lot of time to write songs. We’re half in the process of recording the next one. There was a kind of cut-off after the last song on this album, “I Speak Because I Can” – it felt like a natural end, and the songs written after it just seemed to be different, so they’re on the next album.
INTERVIEW: SAM RICHARDS