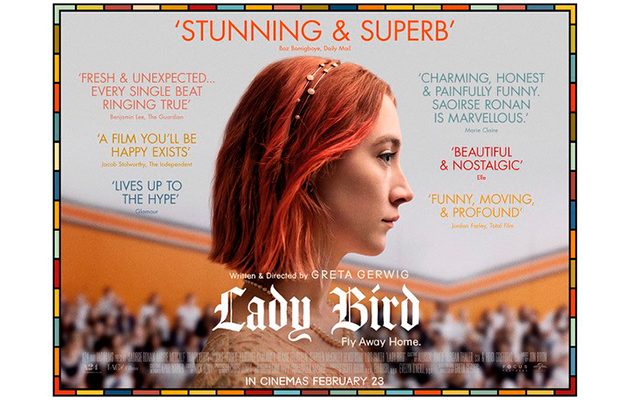 As an actor, Greta Gerwig successfully brings together a number of endearing qualities to her roles. For directors such as Noah Baumbach and Whit Stillman, she has been a welcome and balanced presence – whimsical and clever, spirited and earnest. Fortunately, she brings those same qualities – plus a few more – to her latest project, Lady Bird, a loosely autobiographical story of a confused teenage girl growing up during the early Noughties.

Gerwig, like the film’s protagonist Christine McPherson – aka Lady Bird – grew up in Sacramento (“the Midwest of California”), attended Catholic high school where she entertains lofty aspirations – “I want to live!” she declares – of going to Paris or perhaps one of the storied east coast liberal arts schools. She lives at home with her parents – a frank, hardworking mother (Roseanne’s Laurie Metcalf) and her easygoing, indulgent father (Tracy Letts). It is a knotty familial bond – Christine’s nickname itself is an act of defiance against her parents: “It was given by myself to myself.”

As played by Saoirse Ronan, Lady Bird is a mixed bag of emotions – hurtling between delight, sorrow, fear and anger, full of abrupt, capricious energy. The film revolves around her relationships, with her parents, her best friend Julie (Beanie Feldstein), two boyfrields and the school queen bee who Lady Bird seeks to befriend. Lady Bird and her family live on “the wrong side of the tracks”, and one aspect of Gerwig’s story follows the path of money and the delicate social distinctions between those who have it and those who don’t.

Along the way, there are several elegant and witty diversions – including an amateur production of a Sondheim’s Merrily We Roll Along – as well as the use of Dave Matthews Band’s “Crash Into Me” during two pivotal scenes. As this film develops, it becomes apparent that Lady Bird’s dream to go to a fancy college “where writers live in the woods” is part of a warm, generous character study of a young woman in the process of working out who she is, what she wants and all the hazards that follow.