The latest transmissions from Kling-Klang 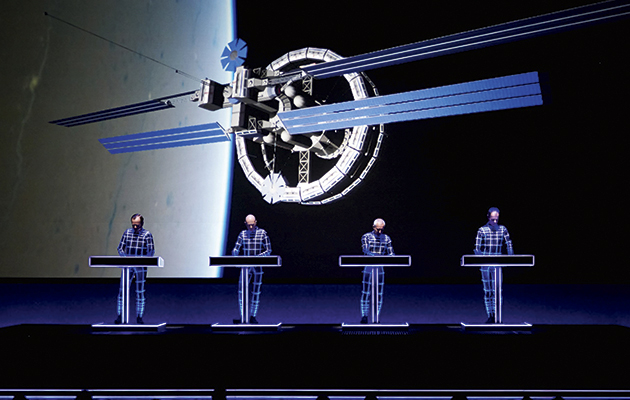 Kraftwerk continue to revisit their beloved canon of ’70s and ’80s classics, digitally tweaking and polishing and enhancing. This latest reboot features live versions of the band’s 8LP official catalogue, including the first visual record of their current 3D stage show on Blu-Ray and DVD.

The full immersive home-viewing experience requires a 3D Blu-Ray player and 3D TV, a Betamax-style failed technology that even the big electronics firms have recently abandoned. Fortunately, the Blu-Ray also works in standard 2D players, which offer a fuzzy approximation of the stereoscopic visual effects. The standard edition features a 77-minute greatest hits set filmed at various locations around the globe. Typically for Kraftwerk, the audio mix is pristine, spacious and compatible with the latest Dolby Atmos 5.1 technology. In layman’s terms, this means these exactingly assembled electronic sound paintings sound pin-point precise even on my ancient laptop computer, and positively cinematic through a regular DVD and TV speakers. Sonically, this is the cutting-edge frontier.

And yet, visually, Kraftwerk remain oddly constricted by their mid to late 20th century aesthetic. The childlike animation for the 14-minute live version of “Autobahn”, for example, features sunny motorway vistas and chrome-gleaming antique cars clearly modelled on the 1974 album sleeve artwork. It looks like a lost episode of Mary, Mungo And Midge. Likewise, the metronomic whoosh and crunch of Trans-Europe Express unspools to striking monochrome graphics of streamlined trains, meticulously detailed iron bridges and sleek railtracks that appear to swoop high over the audience’s heads as they stretch away to infinity. Tron comes to mind. Of course, all this retro-futurism is largely a conscious stylistic choice, and it can produce sublime results, but some of these clunky throwbacks feel uninspired and overly literal. The boxy typography and techno-fetishist imagery that Kraftwerk deploy on tracks like “Techno Pop” are rooted in the low-res arcade-game era.

For dedicated fans, another annoyance is how many of the finest audio-visual performances are only accessible on the eight-album, 436-minute Blu-Ray disc in the expensive deluxe boxset. Tracks like the vocoder-driven synth voyage “Spacelab”, with its Kubrick-sized 3-D panoramas of distant planets, or the serene city symphony “Metropolis”, illustrated by rolling waves of Ballardian skyscrapers. Mesmerising, timeless beauty from the electronic Beatles. But too much of their genius is buried in the depths of this awkwardly conceived collection.