Klaxons – Myths Of The Near Future 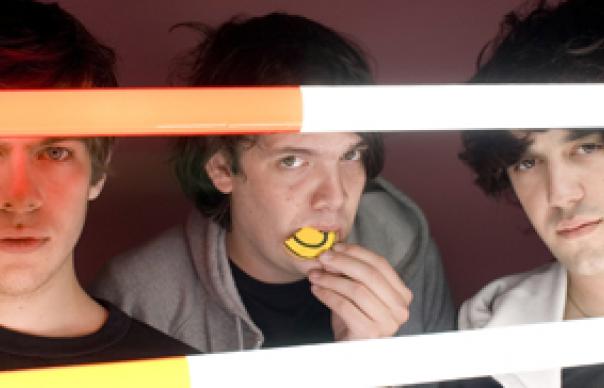 Amid last year’s clamour to scramble aboard the “nu-rave” bandwagon, one crucial fact was wilfully overlooked: that the garish scene’s instigators, Klaxons, are more EMF than Altern-8. A young and photogenic three-piece from south London, Klaxons wear hoodies branded with smiley faces and smear their melodic art-rock with the flourescent goo of vintage rave. Sirens and cheers introduce the single “Atlantis To Interzone”, for example. Signed for a silly sum after a handful of gigs, Simon Taylor, Jamie Reynolds and James Righton are the zeitgeist MySpaced, 2007’s top buzz band, and, yes, teenage fans do wave glowsticks at their gigs. To some seasoned observers, it’s one flashback too many.

Scrape away the DayGlo cosmetics, however, and Klaxons bristle with energy and ideas. They gave white-gloved knuckle-dragger “The Bouncer” by Kicks Like A Mule an inspired indie makeover on an early b-side (on Klaxons’ timeline, “early” means ten months ago). And their romp through Grace’s 1995 house anthem “Not Over Yet”, a live favourite but one of the weaker moments on this intrepid debut, is audibly executed for love, not irony’s sake.

If Klaxons are galvanised by the blissfully naïve, let-me-be-your-fantasy Utopian energy rush of early-’90s rave, then (i)Myths Of The Near Future(i) is all the better for it. This is a marvellous gonzo pop record in the vein of Super Furry Animals’ (i)Fuzzy Logic(i), a syrupy blitz of Bowie, Blur and Ballard that hits the ground galloping on “Two Receivers”. The opener mimics the rumble of Leftfield’s “Phat Planet” before setting the album’s loopy agenda with a dreamy “Strings to your bow/ Run through the flow,” chorus.

There follows a brace of remarkably tuneful three-minute hits-to-be – “Golden Skans”, “Totem On The Timeline”, “Isle Of Her”, “As Above So Below” – a grungy blend of Visage and the Pixies kneaded into shape by James Ford, the producer responsible for transforming Klaxons’ clumsy collages into striking pop-art. Quaint though the notion might seem, Klaxons are hellbent on pushing things forward, regardless of where they end up. With this enjoyably frantic debut, they’re off to a fine start.