Kings Of Leon – Only By The Night

Slowing the tempos, the Followills speed their ascent to the rock pantheon 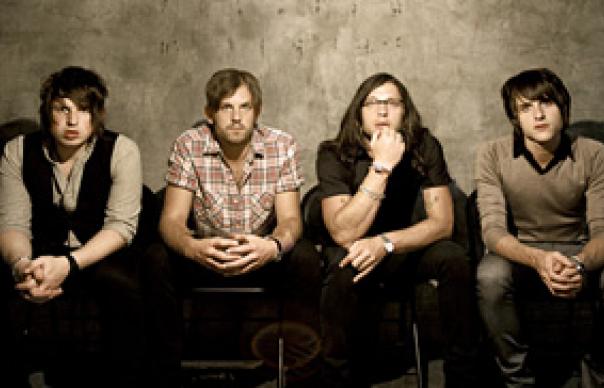 When the Kings Of Leon recorded their Holy Roller Novocaine EP in 2002, they were musical novices ranging in age from 15 to 22, but they possessed amazing instincts, fueled by their shared DNA. In the six years since, the four Followills – three brothers and a cousin – have grown into one of most exciting rock’n’roll bands on the planet, the hand-picked touring partners of U2 and Bob Dylan, no less. And with their third album, 2007’s Because Of The Times, they unleashed a surprising new level of sophistication and daring.

Oldest brother Nathan started whipping up all sorts of dynamic rhythmic counterpoints on every part of his kit, while kid brother Jared unleashed, thick, shuddering, super-melodic bass lines that meshed with Nathan’s hell-bent pummeling like Velcro. Cousin Matthew, meanwhile, took his guitar and effects pedals into all sorts of intriguing places, bringing atmosphere as well as edge, slicing through the carnivorous grooves as if his Gibson were a Ginsu knife. But they had the good sense to counterbalance their sonic explorations with a brace of signature barnburners.

Now, with Only By The Night, they’ve taken their experimentation a bold (some might say foolhardy) step further, as these young dynamos, who’ve built their rep on bringing the heat, opt to slow down and mellow out. Relatively speaking.

Tellingly, this is the first KOL recording not guided by the firm hand of Ethan Johns; instead they’ve co-produced themselves, in conjunction with their mentor Angelo Petraglia and Aha Shake Heartbreak engineer Jacquire King. The decision evidences their strapping self-confidence, which goes hand in hand with a joyous collective involvement in performance that Johns has referred to as “spiritual elevation” – to the point where they’re able to focus on the mise-en-scene, knowing the rawk will take care of itself.

As always, the recipe starts with singer/rhythm guitarist Caleb Followill’s oddly shaped, cinematically vivid songs and always surprising vocals, as self-directed as those of the young Van Morrison. His is a strikingly original vocal character, at once conversational and incantatory, with its roil of phlegm, pine tar and raw silk, sliding upward at the ends of lines in a real-time metaphor of yearning. But beyond Caleb’s trump card, anything goes on this record.

The Kings immediately set off into the unknown with the opener, which they’ve coyly titled “Closer”. The first sound we hear is the whoop-whoop-whoop of Matthew’s guitar, mimicking a sequencer oscillating forlornly, followed by a chilling howl off in the distance, like something from the audio track of The Blair Witch Project. That’s Matthew as well, singing wordlessly into his guitar pickup. In these first moments, he introduces the trippily symphonic, wildly inventive colorations that provide Only By The Night with its high, arching ceiling, while Nathan and Jared lay out its shuddering foundation. Caleb inhabits the shadowy space between with a mixture of brooding dislocation (this is a band that’s adored abroad while still fighting to prove itself in its homeland, after all) and primal emotion, laced with bursts of elation and defiance.

“Closer” recedes like a fog bank, and “Crawl” blasts in with the metallic thrum of “Street Fightin’ Man”, the agitated urgency of “Gimme Shelter” and the swagger of “Whole Lotta Love,” sweeping in its savage grace. Jared’s aggro bass line is redically fuzzed-out like a pissed-off porcupine, as Caleb gets worked up about “The reds and the whites and abused/The crucified USA,” then turns into the spitting image of his Pentecostal preacher old man, warning, with End of Days fervor, “As every prophet unfolds/Hell is surely on its way.”

“Sex On Fire” returns the band to familiar thematic territory of unbridled lust – no wonder it’s the label’s pick for the first single. The track races along like a guy steering with his dick (as we say in the USA) on a hopped-up reggae groove a la the last LP’s “Ragoo”. Then another quick shift of gears into “Use Somebody”, a rousing, full-throated indie anthem in the manner of Arcade Fire. It’s powered by one of those perfectly natural, utterly indelible refrains that have characterized Caleb’s best songs, as he sing/shouts Otis-style, “You know that I could use somebody” – somehow grabbing the word “use” from just beyond the top of his falsetto.

Because their revved-up pulses are genetically in synch, the four players are able to design the tracks in architectural detail, each part locking into the rest with unerring precision, and this tautness keeps the album from sagging through its most challenging stretch – five midtempo songs in a row. In the simmering sequence, rippling with intertwined musical nuance, the band cruises confidently through the nocturne “Manhattan”, the nostalgia-drenched “Revelry”, the exceedingly tart “17” and the oblique, flaring “Notion” (featuring another of Caleb’s grabby refrains – “Don’t knock it, don’t knock it, you been there before”), on the way to the album’s most immediately captivating track. “I Want You” sways along on a languorous summertime groove, set off by a clattering cowbell/snare pattern from Nathan, quicksilver guitar arcs from Matthew and burbling, Keef-like changes from Caleb, who tosses off a litany of one-liners from the American vernacular, like “Pick me up some bottles of booze” and “I call shotgun.” It’s the most laidback piece they’ve ever attempted, and that the Kings pull off this beachy ballad so masterfully may be their biggest surprise of all.

Following the blazing, double-time outro of “Be Somebody” – a brief exhibition of their young manhood, so to speak – the album goes out as ominously as it came in with “Cold Desert”, a panorama on the order of “Arizona” in which Caleb’s protagonist zigzags aimlessly across a harsh, Cormac McCarthy-like wasteland, hounded by the circling specters of sin and redemption. Mick Jagger might’ve come up with a line like “Jesus don’t love me” for Exile On Main Street, but in Caleb’s case the expression isn’t clever artifice – it’s a basic condition of his existence. There’s a touch of bravado even in this existential wilderness, as Caleb sings, “I’ve always been known to cross lines.”

They no longer seem so much a Southern band as an American one, the Gen Y counterparts of The Band and Tom Petty & The Heartbreakers (both of which managed to slow the tempos while maintaining the intensity). While so many other young groups scrutinize and appropriate the music of the greats, playing rock’n’roll just comes naturally to the Followill boys, as if they were time-travelers from the golden age. The Kings aren’t impersonating the greats, they’re competing with them, on an increasingly level playing field, and that makes all the difference.