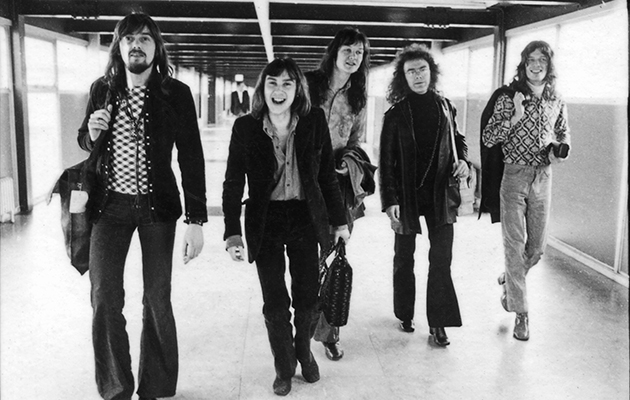 While other pioneers of progressive rock play cruise ships, split into rival factions or think about retiring, King Crimson seem shockingly active these days. Currently touring North America for the second time this year, they’ve released two recent live albums (Live In Chicago and the Japan-only Live In Vienna) as well as an EP (Heroes – Live In Europe) and the latest instalment in their ongoing ‘tour box’ series, The Elements Of King Crimson. Onstage in cities like Raleigh and Newark, their eight-piece line-up goes deep into the back catalogue.

They play, oddly enough, a lot of the music on Sailors’ Tales, a lavish-looking 27-disc boxset (21CD/2DVD/4Blu-Ray) that focuses on the years 1970–2. This was a troubled period when Crimson lost crucial personnel, leaving Robert Fripp and lyricist Pete Sinfield with the name, the determination and the vision – just about – to create three albums with ad hoc line-ups and guest musicians. In The Wake Of Poseidon, Lizard and Islands rubbed shoulders with jazz, chamber-rock and the avant-garde (and appear here in their 2009–10 Steven Wilson remix versions), but were soon forgotten when Fripp, in autumn ’72, put together the ferocious, free-improvising Wetton-Bruford-Muir-Cross line-up that made Larks’ Tongues In Aspic.

Although the Poseidon, Lizard and Islands discs all contain bonus tracks and outtakes, the boxset’s primary focus is on live material. Over a dozen concerts from 1971–2 are included, four of which are previously unreleased. The remainder have been available over the years through the King Crimson Collectors’ Club or as downloads via Fripp’s website. For the majority of Sailors’ Tales, then, we’re in the ribald, raucous company of singer-bassist Raymond (Boz) Burrell, drummer Ian Wallace and sax/flautist Mel Collins. The stage is set for powerhouse drumming, uncertain jazz, thick peasoupers of gothic Mellotron and gales of nervous laughter. “We’d now like to render ‘In The Court Of The Crimson King’,” Burrell tells an audience in Frankfurt. Render it unconscious with a severely good kicking, he means.

Like a ballet in hobnail boots, this line-up of Crimson certainly belched some crude masculinity into Fripp’s cultivated, effete, elaborately English music. Wallace is a heavy-hitting brute. Burrell, a future co-founder of Bad Company, applies his gruff voice to Sinfield’s flowery poetry – imagine Hawkwind-era Lemmy singing Samuel Taylor Coleridge – while Fripp, playing his guitar like a demon, doubles on Mellotron to give the illusion of a fifth member. They may not be adept at the music’s filigree embroidery, but they know how to make a right old racket. The seesawing sturm und drang of “Cirkus” (from Lizard) is a nightly highlight, as is “Sailor’s Tale” (Islands), a storm-tossed instrumental that Collins, clearly a Pharoah Sanders fan, approaches with all the glee of a free-jazz open goal. “Groon”, an old B-side, becomes a blistering skronk-sax blowout incorporating a 12-minute drum solo. “Improv”, a 27-minute piece that they play at the Marquee in August ’71, sees Fripp drop a few tantalising hints towards “Larks’ Tongues In Aspic, Part One”, but is mostly utter pandemonium, if you like that sort of thing. As for “The Devil’s Triangle”, an ominous bolero march from Poseidon, those random whooshes and bleeps come from Sinfield’s VCS3 synthesiser, which he operates from the mixing desk, and sound like he’s aiming gunfire over the audience’s heads while trying to tune a shortwave radio. At the opposite end of the prog-rock spectrum, however, Collins puts down his tenor sax, picks up his flute and becomes a man transformed. His playing on “Cadence And Cascade” every night is like a fawn admiring its reflection in a brook.

The sound of the ’71 gigs is gritty and realistic, and often mixed in stereo. But there’s a noticeable drop in quality when the ’72 gigs start (on disc 10) in Wilmington, Delaware. These are cassette recordings, very rough and bootleggy. It’s the kind of distorted sound that made Crimson’s American record label baulk at releasing Earthbound (disc 18), a ’72 live album that angered and disappointed fans in the UK even at a budget price. It’s possible to get used to the sonic sludge, of course, and appreciate the gigs for their historical value; but several tracks on discs 10–16 and 26–27 cut out unexpectedly, or begin in mid-performance, depending on whether the band’s soundman has remembered to put a tape in the machine.

By the time of that February–March US tour, Crimson had grown in confidence, introducing a lewd groove or two into their repertoire (“Ladies Of The Road”) and even inserting a boogie shuffle in the middle of “Cirkus”. By April, though, they were defunct, merely three more names added by Fripp to the growing ranks of the Crimson departed. Burrell became a stadium rocker with Bad Co. Wallace was hired by Bob Dylan to play drums on Street-Legal. Collins, after four decades as one of rock’s most in-demand session men, rejoined Crimson in 2013 and has been reacquainting his tenor sax with “Cirkus”, “Sailor’s Tale” and more. For those listeners who intend to go the full distance with Sailors’ Tales, Collins – along with Fripp himself – will surely emerge as the boxset’s heroic figure. The ’71–’72 band is not over-fondly remembered by aficionados, perhaps, but it enabled King Crimson to get from B to C, and from D to E, and from there to wherever they are now.