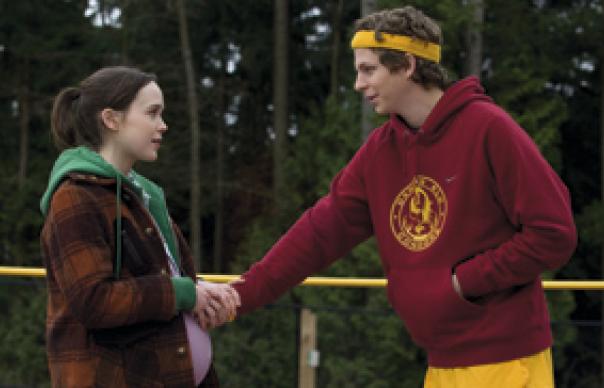 You know a new generation’s taken over American indie comedy when a schoolgirl here ridicules her teacher by making big eyes at him and sarcastically cooing, “Oh me too, I love Woody Allen.”
16-year-old Juno (Page) gets knocked up, after one sexual experiment with her rather wet classmate Bleeker (Cera, from Superbad).

Pragmatically, she decides to find a perfect couple who’ll adopt the baby. Scanning small ads in the local paper she’s drawn to Mark and Vanessa Loring (Jason Bateman and Jennifer Garner). At first this affluent suburban pair seem to be too good to be true. They are. Mark graduates from enlightening her as to the magic of Sonic Youth to taking a less wholesome, midlife-crisis-fuelled interest, while Vanessa’s a Stepford wife on the verge of a nervous breakdown. “She’s really beautiful,” muse Juno and her best friend, “but really horrible. Like Diana Ross.” Fortunately Juno has hip parents in the shape of JK Simmons and Alison Janney. Their reaction when she breaks the news of her pregnancy is, “Thank God – we thought you were going to say: hard drugs.” All is eventually resolved in a vaguely romantic feel-good manner, which is the only false step this wonderfully witty, dark-hearted movie makes.

Director Reitman matches the cutting cynicism he showed in Thank You For Smoking. Yet this is Page’s triumph, spitting out smart-ass lines like she thought Tina Fey’s Mean Girls was soft and Terry Zwigoff’s Ghost World held too optimistic a world view. Juno likes The Stooges, The Runaways, gory horror movies and, well, little else. She’s a prematurely ultra-sophisticated post-slacker: pregnancy, she drawls, “makes me pee like Seabiscuit”. She delivers Diablo Cody’s gum-snapping dialogue with precision “Hi,” she announces brightly on marching up to the reception desk of a clinic, “I’m calling to procure a hasty abortion.”

You could argue that it cops out at the end, but that in itself would be a judgment call on a woman’s choice. Somewhere between bleak art-house and Judd Apatow farce there’s a perfect film to be made around these issues, and this is very nearly it. Despite an indie soundtrack so tragically fey that you’re startled when Belle & Sebastian come on, it’s whip-smart, cool, and very, very funny.