Rock music: the Arch-Drude's most visionary and epic work, now reissued on vinyl 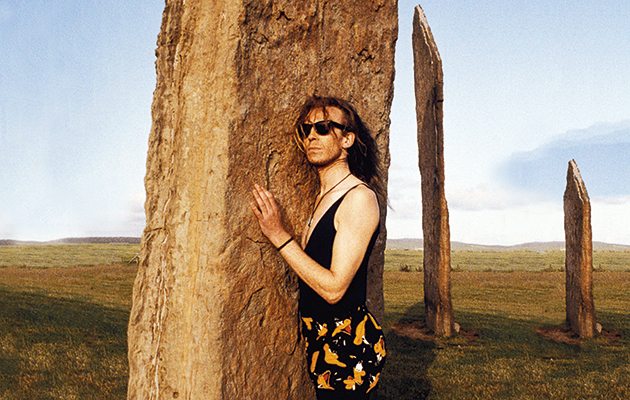 If Robert Graves had wielded a Fender XII instead of a steel nib when he eulogised the pre-Christian gods that still stalk our culture, poetry and landscapes, he might have come up with something a little like Cope’s epic double albums Peggy Suicide and Jehovahkill. This was heavy rock music – the rock in question being sarsen, Lewisian Gneiss and bluestone, quarried and erected to form henges, dolmens and menhirs by the megalithic people of the British Isles.

“Man is naturally a serpentine traveller, and all those straight Roman roads are just Empire Paranoia,” wrote Cope in the sleevenotes to Jehovahkill; and the self-styled Arch-Drude certainly reached this point by a suitably un-Roman route. When The Teardrop Explodes ended in 1982, he embarked on a solo career, “building back catalogue” with the excellent lysergic indie of World Shut Your Mouth and Fried. Then came his first two albums for Island, that giant mic stand and an attempt at chart stardom; the results, 1987’s Saint Julian and 1988’s My Nation Underground (now also being reissued on vinyl, all sourced from the original tapes), were glossy and uneven, trying out Detroit rock and stadium funk. There were strong moments – “Trampolene”, “World Shut Your Mouth”, “Charlotte Anne” – but by the time of My Nation Underground, Cope’s work was suffering from a lack of inspiration, unsympathetic production and label interference.

In one weekend at the end of recording sessions, however, Cope, guitarist Donald Ross Skinner and drummer Rooster Cosby tracked a whole other album, Skellington, and released it on a tiny label, with the similar Droolian following later in 1990. Both consisted of rough acoustic takes channelling quicksilver bursts of inspiration such as “Out Of My Mind On Dope And Speed” and “Robert Mitchum”; they were slapdash, sure, but also coursing with the wild creativity that his previous two albums had lacked.

This experience – melded with a reading list featuring MC5 manager John Sinclair, occult philosopher Colin Wilson and wayward archaeologist TC Lethbridge – would set Cope on course for a more unfiltered, socially conscious music. 1991’s Peggy Suicide was the first result of this revitalised approach, an 80-minute splurge of Cope’s concerns about the planet, represented by the dying deity of the title, who appeared to the singer in a vision. “I saw Mother Earth,” Cope wrote in the sleevenotes, “an enormous goddess standing upright and proud, but throwing her head back in pain and confusion at the treatment that Mankind chosen to mete out to her.”

His method of songwriting at the time generally involved cycling through south London, then calling back home from a payphone near Westminster Bridge to record the ideas on his answer-phone. The result of all that pedalling was a very modern form of protest music, one that railed against the Poll Tax on “Leperskin”, Thatcher’s legacy on “Promised Land”, climate change on “Hanging Out & Hung Up On The Line” and the motor vehicle on “East Easy Rider”, all with a focus that his stoned heroes Jim Morrison, Sky Saxon and Syd Barrett wouldn’t have been capable of mustering. “Not Raving But Drowning”, meanwhile, recounted the tale of a tripping football fan who fell from the back of a Sealink ferry and drowned in the English Channel, while “Safesurfer” (which appeared on Droolian in an early form) is a seduction song with a pro-condom plea. Musically, Peggy… was deliciously diverse, ranging from Funkadelic epics such as “East Easy Rider” and the psychedelic folk of “Pristeen”, to the Technicolor pop of “The American Lite” and “Beautiful Love” and the Motörhead riffage of “Hanging Out & Hung Up On The Line”. Wah-wah was everywhere, often fed with Ovation 12-string.

If this was the first fruit of Cope’s new approach, there were enough seeds inside to grow a whole new branch of philosophy, a whole orchard of music. The cover of Peggy’s swift follow-up, Jehovahkill, featured the Outer Hebrides’ Callanish Stones, again here replicated on the tasty etching on Side D, and the 16 tracks inside mixed the socially conscious, Goddess-worshipping approach of Peggy with a new exploration of this island’s ancient religions, long subsumed into the might of Christianity.

There was also a major new musical element at play, krautrock. Never shy of telegraphing his enthusiasms to listeners, Cope shamelessly tapped into the motorik rhythms and cosmic guitar of Neu! on “Necropolis” and “The Subtle Energies Commission”, the trance-like grooves of Can on “Poet Is Priest” and Faust-like sonic collage on “Up-Wards At 45°” and “Soul Desert”. In between were dark folk lullabies like “Know (Cut My Friend Down)” and “Julian H Cope”; sometimes the approaches were mixed, as on “Akhenaten”, a descending glam stomp that attempts to reclaim the symbol of the cross for pagans, or “Fear Loves This Place”, a minor-key ballad that finds Cope railing against this “hell of a heaven”.

Island had already rejected an earlier version of the album, so they were hardly delighted by the expanded finished product, its eccentric subject matter and erratic mix (vocals uncomfortably high, drums low; Cope’s A&R described the brutalist “Slow Rider” as the worst song he’d ever heard in his life); they deigned to put out Jehovahkill, but soon after its release Cope was dropped. The greedheads, as Cope would have it, might not have recognised a masterpiece when they heard one, but the furore brought him even greater fame, spurring him on to create his own label and get deeper into his prehistoric and environmental interests. Today, his final two albums for Island remain as holistic as rock music gets, joining the dots between the Druids and dolmens of 3,000 BCE, and the environmental and political destruction of the early 1990s CE; and they can clearly be seen as the start of everything Cope-related that came after. Spiking rock’n’roll with transcendent and countercultural ideas, these albums, at once poetic and journalistic, remain Cope’s boldest, most ambitious artefacts – true megaliths of the form.