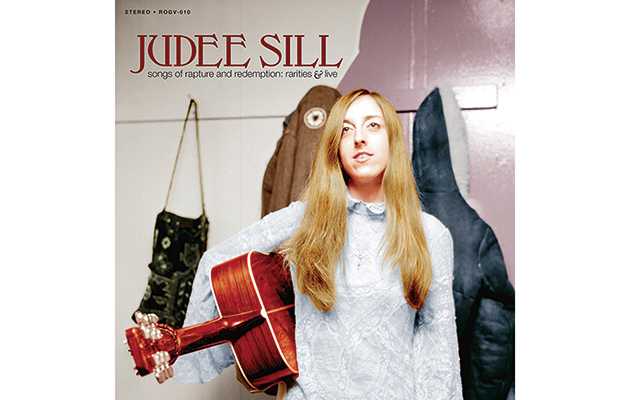 Taking a five-second break to eat a strawberry while playing a support slot to Crosby & Nash at the Boston Music Hall in October 1971, Judee Sill tells her audience, “I used to be the church organist in a reform school.” There is a smattering of disbelieving laughter.  “I did, I swear.”

In her brief period as the golden girl of David Geffen’s newly founded Asylum label, Sill took a certain cool delight in sharing her past misfortunes. She certainly had plenty to go around. One tragedy or another had wiped out her immediate family, she was on the brink of a second divorce, and had also been an armed robber’s accomplice, a heroin addict and an occasional prostitute before being sent to prison for forgery. In person, she had a desire to shock; in music, the ability to awe.

Songs Of Rapture And Redemption features live tracks, demos and outtakes originally available on the first generation of CD reissues of her two LPs. The songs on Judee Sill (1971) and Heart Food (1973) warped the holy terror’s miserable experiences into things of rapturous beauty, and even in their unfinished form they are ruggedly perfect. When Sill’s voice wobbles slightly in a solo demo of “The Kiss” – one of her many jaw-dropping songs of spiritual yearning – it’s a jarring deviation from the gospel, Christ dropping his fork at the Last Supper.

Not a confessional songwriter by any stretch of the imagination, Sill’s stock-in-trade was a kind of astrally projected Americana, full of death-defying melodies and spiralling chord changes; music by Brian Wilson, lyrics by Kahlil Gibran. She would assert – perhaps with a certain sneery twinkle – that her two greatest influences were Bach and Pythagoras, and was sufficiently proud of her classically literate horn arrangements to sing them while on stage in Boston.

However, if the mood is rhapsodic, the delivery is always mathematically precise. Few this side of Karen Carpenter could deliver startling lines with such chilling restraint. Sill’s most famous song, “Jesus Was A Crossmaker”, is full of awkward melodic twists, but on the demo and live versions here, there are no unplaned edges, no wandering notes and no emotional signposting. Moreover, these stunningly intricate pieces seemingly came fully formed; “The Donor”, a huge, multi-layered fandango in its final Heart Food incarnation, is perfectly mapped out in miniature on the demo, Sill slathering on her own geometrically perfect harmonies. There is no room for improvement.

In a loose-slung era, such precision  may have done Sill no favours. Her  esoteric beliefs may also have been a  little too far out for most. At the Boston concert, she introduces the Charlie Brown-jazz of “Enchanted Sky Machines” baldly as “a religious song about flying saucers coming at the end of the world to take all of the deserving people away until the holocaust is over”.

Meanwhile, Sill’s Jesus (alluded to frequently, and given a close-up in Heart Food outtake “The Vigilante”) swaggers the Earth righting wrongs like a sexy Western hero. Sill was baptised (by crooner Pat Boone, according to friends), but her spiritual path was an idiosyncratic one; as she sings on the skeletal version of “There’s A Rugged Road” that closes this set, “blindly faithful but following none”.

If her songs were a little obtuse, her contemporaries recognised their quality. In 1969, The Turtles recorded her undulating “Lady-O” – delivered succinctly by Sill in the live section of Songs Of Rapture And Redemption – and didn’t change a note. Singer-songwriter JD Souther, who had an unhappy romantic dalliance with Sill, later said, “I thought Jackson Browne was the furthest along  at having learned songwriting, but then  I met Judee and thought, ‘Fuck, man, she’s school for all of us.’”

Kudos, however, was Sill’s only tangible reward. Unremarkable record sales – and some ill-considered comments about label boss David Geffen – spelled the end of her Asylum deal, and a car accident sparked a marked decline in already poor fortunes (Sill told friends that Danny Kaye rear-ended her, and John Wayne then took her to hospital). Suffering severe back pain when she recorded demos in 1974 for a third LP (released in 2005 as Dreams Come True), botched corrective operations would send Sill back to serious drug use. She overdosed alone in her North Hollywood home in November 1979.

“She went through a lot of pain and I think you get that in her music, from the accidents and just her earlier lifestyle, but she was able to get over that and overcome that,” says former accomplice Tommy Peltier in a sleevenote to Songs Of Rapture And Redemption. Sill’s songs acknowledge her suffering, but demand no sympathy; bad things happen, but better things are to come. These unvarnished versions highlight the phenomenal craftsmanship that underpins her reputation, and how – in art if not in life – she conquered all. Unbelievable, but true. Extras: None.