The man in black takes it to the masses across three decades and two CDs... 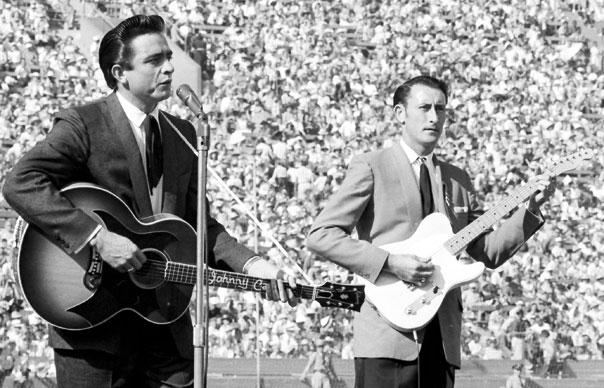 There’s a fair argument to say Johnny Cash was a performer first and a recording artist second. Notwithstanding that fine Indian summer with Rick Rubin, he was never quite as vivid in the studio as he was before a live audience. A fact borne out by this third instalment in the bootleg series, which bolts together various shows, most of them unreleased, from 1956 to ’79. As such it offers a fascinating cultural timelock of post-war American history, with Cash stage centre as we witness firsthand the onrush of rock’n’roll and Elvis, the ‘60s folk boom and age of protest, Vietnam, Nixon and beyond.

It all begins at the Big ‘D’ Jamboree in Dallas, where a rousing “I Walk The Line” is so fresh that Cash prefaces it with “here’s our latest on Sun”. The ‘50s and early ‘60s performances find him and the band in playful, rambunctious mode, untamed and engaged, tossing out asides and jokey parodies of Ernest Tubb and Presley. By the time Pete Seeger introduces him at Newport Folk in ’64, Cash is marginally more serious, spreading the word on new pal Bob Dylan and delivering stentorian takes of “Don’t Think Twice, It’s Alright” and “The Ballad Of Ira Hayes”.

Disc One ends on a roar, with Cash, wife June Carter and Carl Perkins heading out to Southeast Asia in between Folsom Prison and San Quentin gigs to deliver a highly animated set for US troops. “Big River” and “Daddy Sang Bass” are pick of the bunch, all scalding guitar twang, big harmonies and oodles of yee-haw.

Nixon’s windy intro to the White House show of April 1970 pays tribute to Jim Lovell and the Apollo 13 crew, who’d just made it home, before Cash settles into a sombre set of mainly religious songs. It’s a theme extended across the rest of CD Two, with stripped renditions of “Ragged Old Flag” and “One Piece At A Time” from the Carter Family Fold in Virginia six years later.

The sound quality may sometimes vary, but Bootleg Vol.3 is a visceral portrait of a man making sense of both himself and his times.
Rob Hughes