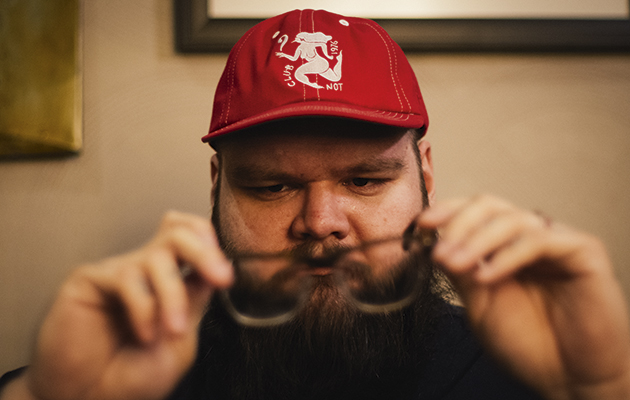 “Love’s a violent word, don’t you forget it,” John Moreland cautions on “Old Wounds”, one of several standouts on his fourth solo LP, Big Bad Luv. This Oklahoma singer-songwriter writes songs that hurt. He wrings poetry from commonplace words and wisdom from dusty Midwestern country rock, chronicling tangled relationships and dead-end small towns, crushing regrets and dying hopes. These songs form a roadmap of emotional scars and bruises, but remarkably, Moreland never sounds grim or cynical. Like so many of his heroes, he finds some transcendence in heartache. “If we don’t bleed, it don’t feel like a song.”

Moreland has been spilling blood for most of his life. Born in Texas, raised in Kentucky, and based in Tulsa, Oklahoma, he spent his teenage years in a series of DIY punk bands with names like Widow Song and Thirty Called Arson. At some point he converted to country music with the fervour of someone converting to Christianity, immersing himself in such Lone Star saints as Steve Earle, Guy Clark and Townes Van Zandt. Four studio albums into a solo career, he has been associated with the bustling Oklahoma songwriter scene that includes John Fullbright, Samantha Crain, Parker Millsap, and JD McPherson. They all share a direct and unpretentious lyrical style, yet Moreland sounds particularly attuned to the poetry of despair, his songs dreamier and weightier.

He defined his voice on 2011’s Earthbound Blues and refined it on 2013’s In The Throes, but it wasn’t until 2015’s High On Tulsa Heat that he found a national audience. In addition to touring with Jason Isbell, Patty Griffin and Lucero, he has landed songs on the TV series Sons Of Anarchy and signed with 4AD – not a label closely associated with country. Along the way he won over some unlikely fans. Liberal pundit Rachel Maddow recently tweeted, “If the US music business made any sense, guys like John Moreland would be household names.”

Moreland may not have achieved that level of notoriety, but Big Bad Luv brings him a big step closer. Playing off the mood if not the sound of High On Tulsa Heat, the new album makes good use of his road-sharpened backing band, who inject a bit more rock and blues and even jazz into his country music. Opener “Sallisaw Blue” moves nimbly on a feisty guitar riff as Moreland evokes the kind of dying small town that’s the province of Springsteen and Mellencamp (Sallisaw is the hometown of the Joad clan from Steinbeck’s The Grapes Of Wrath). “There’s a neon sign that says, ‘big bad love,’ and a noose hanging down from the heavens above,” he sings, his booming voice finding the drama in loose ends and hard times. “It’s no use, God bless these blues/Let’s get wrecked and bruised and battered.” It’s a harrowing chorus, but Moreland sings it with a casual exuberance, as though he’s cultivating heartache as inspiration for new songs.

Every song on Big Bad Luv seems to stem from emotional trauma, but he’s pragmatic enough to get something good out of each one. Moreland and his band race through “Aint’ We Gold” and “Amen, So Be It”, lean rock jams about romantic resignation. Paddy Ryan provides a gently persistent backbeat on “Lies I Chose To Believe”, while Rick Steff adds some honky-tonk crackle behind Moreland’s tale of determined self-delusion. Even when he pares down to just his voice and guitar on “No Glory In Regret” and “Latchkey Kid”, he makes every note resonate with purpose. That connection between heartache and transcendence is nowhere more even than on “Slow Down Easy”, a rousing Okie gospel track that may be the LP’s finest moment. Featuring Cary Ann Hearst and Michael Trent of Shovels & Rope on sympathetic harmonies, the song crawls by at a deliberate pace as Moreland sings of people “born homesick” and “too sick to go too deep”. But he manages to instil the song with a hard-won optimism, as though these tribulations might soon be over. “Slow down easy,” he sings, instructing either his band or his muse. “I’ve been hauling a heavy soul.” Moreland sounds  like he wouldn’t want his load to  be any lighter.

Q&A
It sounds like there’s a bigger band on this album. Are you thinking about arrangements as you’re writing?
I usually do. I played in bands for 15 years before starting a solo career, so that’s the way I’ve always written. In this case, the band came before the songs. These guys are my friends, and it’s natural to have them on the record.

“Old Wounds” sounds like it could be your overarching philosophy of making music.
I started writing “Old Wounds” when I was recording High On Tulsa Heat, and I finished it six months later in a hotel room in Atlanta. I guess it does describe my philosophy of making music, but it’s not a flag that I’m trying to wave. I was wondering about the subconscious reasons people might subject themselves to turmoil.

Do the songs reveal new meanings as you live with them?
Absolutely. I usually couldn’t tell you what most of my songs are about when I’m writing them. But almost every night onstage, I’ll  sing a particular line and think  of some new meaning that I hadn’t considered before.
INTERVIEW: STEPHEN DEUSNER