Gloriously bizarre TV show, cut off in its prime 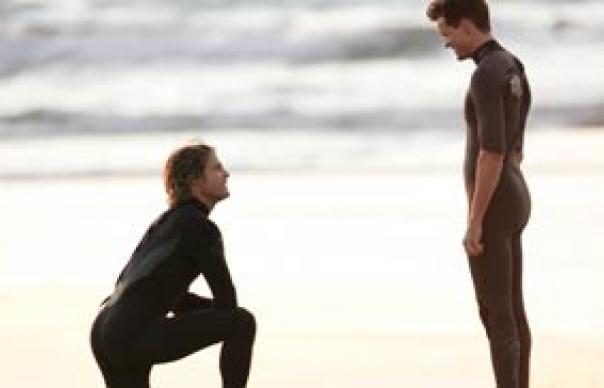 “The miraculous walks among us every day,” writer-producer David Milch growls in a splendidly salty commentary for the opening episode of his ill-fated HBO series, John From Cincinnati, whose mix of hard-boiled mysticism, surreal lyricism, surfing, spirituality, parakeets and profane humour failed to find an audience, was coolly received by largely baffled critics and duly cancelled after 10 episodes. That it made it to the screen at all, however, is something of a miracle in itself. John From Cincinnati is gloriously bizarre, wholly wondrous and in many respects very, very funny.

An award-winning veteran of Steven Bochco’s ground-breaking Hill Street Blues, Milch launched NYPD Blue and went on to create the critically-acclaimed Deadwood for HBO, a singular vision of the Old West, oddly dropped after its third season. HBO then commissioned John From Cincinnati as a flagship replacement for The Sopranos, its first episode airing minutes after that show’s final episode in June 2007. An hour later, the audience it had inherited had dwindled dramatically, a set-back from which the show never really recovered.

Critics who had loved Deadwood now impatiently dismissed John From Cincinnati for its apparently arbitrary narrative, a lack of the formal coherence in which one thing leads to another in a manner we might regard as logical, therefore satisfying what for Milch is a pointless craving for the world to make sense. It’s a notion that in the course of what he has to say about the show makes him first heartlessly guffaw and then in exasperation swear a lot. For Milch, the world is disorganised, illogical, violent, and host simultaneously to the potentially miraculous, random wonders that in our self-absorption are oblivious to us. It’s a point of view that finds a relevant correspondence in the novels of Uncut favourite Kem Nunn, who first worked with Milch on Deadwood and is credited as co-creator here.

Nunn’s probably best known for his harrowing ‘surf-noir’ classic, The Dogs Of Winter, whose accumulative horrors read like a cross between Deliverance and Straw Dogs. John From Cincinnati, however, owes more to an earlier Nunn book – the viciously funny, borderline insane Unassigned Territories, a novel in which callow Obadiah Wheeler, a member of a fundamentalist sect called The Way becomes involved with a UFO cult and an alien artefact of possibly immense, world-changing power, set in the Mojave Desert and populated by a cast of colourful crackpots. It’s like a cross between Wise Blood and Repo Man, also an apt description of John From Cincinnati.

So what’s JFC ‘about’? Briefly, you could say healing, enlightenment, resurrection, a coming apocalypse, things like that. One chill morning a strange young man appears as if from nowhere on the shores of Imperial Beach, southern California, Tijuana just over those hills in the background there. This is the character we’ll come to know as John, from Cincinnati, although it needs to be said that both his name and where he’s from are attributed to him by people in the show who know him no better than us.

John’s first words are: “The end is near.” He is also fond of frequently admitting: “Some things I know, and some things I don’t.” Otherwise, he mostly just repeats what people have said to him, to both comic and disturbing effect. John is possibly an extra-terrestrial, and certainly reminds us of, for instance, of David Bowie as Thomas Jerome Newton, in The Man Who Fell To Earth, or even, come to think of it, Robin Williams in Mork & Mindy. Of course, John could as reasonably be an angel or the son, in fact, of God.

Anyway, John (Austin Nichols, Deadwood’s Morgan Earp) is here on what appears to be a mission of some sort that involves the cantankerous Yosts, a fractious family of famous surfers. Mitch and the overbearingly screechy Cissy (Bruce Greenwood and Rebecca De Mornay) are its elders, Mitch an embittered former surfing champ forced by injury into early retirement, consumed by anger and self-pity.

They have a son, Butchie (Brian Van Holt), described colourfully by Mitch as “a ditch-sleeping doper shit-bird”, another surfing great gone to seed, this time through drugs. Butchie, in turn, has a son, angelic 13-year old Shaun (Greyson Fletcher), whose own surfing chops have attracted the attention of Linc Stark (Luke Perry), the sporting entrepreneur Mitch and Cissy blame for Butchie hitting the skids. Linc wants to sign Shaun to a major sponsorship deal with his vaguely sinister Stinkweed corporation, a battle for Shaun’s soul therefore ensuing.

Into this already volatile brew, you can also throw the characters who circle in the Yosts’ damaged orbit, the saintly surf punk Kai, Butchie’s high school squeeze, demented vet Vietnam Joe and reluctantly retired cop Bill Jacks (a terrific performance by Ed O’Neill), a grieving widower who lives with a houseful of birds, with whom he converses obsessively, often about his dead wife.

And let’s not forget the gang over at the decrepit Snug Harbour Motel, where Butchie crashes. There’s bulky caretaker Ramon (Luis Guzman), the lawyer Dickstein of the Association Of Surfing Attorneys, the motel’s mentally unstable new owner, Barry Cunningham (sexually abused as a teenager in the dreaded Room 24, which John creepily tells us will at some point “give up its dead,”) and the motel’s only paying guests, volatile Hawaiian drug dealer Steady Freddie Lopez and his hapless sidekick Palaka (Dayton Callie and The Wire’s Paul Ben-Victor).

These are all people traumatised by their individual pasts, living in an agonised present, self-obsessed, afraid of the future that John seems here to prepare them for. It’s hilarious and scary that the future of the world may hinge on their healing and enlightenment, which over the course of these 10 brilliant episodes we are given to understand it somehow will. But who knows, really, where Milch might have taken this series if the axe hadn’t fallen before it was fully underway. As it is, as the credits roll on the final episode, the viewer is left up in the air. Much like Mitch, who, I may have forgotten to mention, has with John’s arrival started to levitate.