Pre- and post-Clash work anthologised, along with lost tapes found in Strummer’s shed 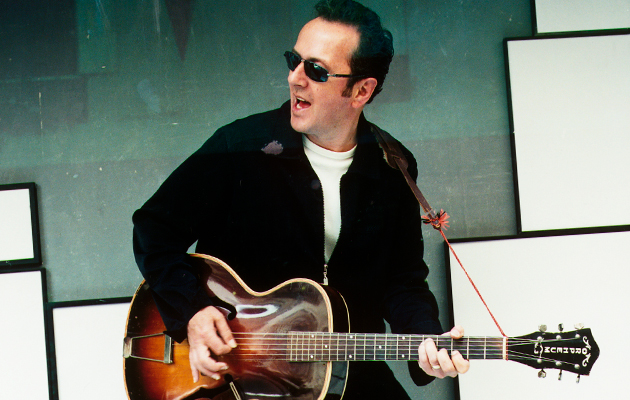 This is the thing about the charisma of premature death. Absolution usually follows. After Joe Strummer died in December 2002, the Strummer Legend was quickly burnished into a holy glow, a posthumous radiance. Joe was no longer The Man Who Broke Up The Clash and it was like he hadn’t spent the best part of a decade drunk or on holiday.  In the way people always have, they saw him more clearly when he was no longer there. They regarded him now as they might the Burning Bush of Biblical  repute or a tablet of stone inscribed with wisdom’s words, God’s hip voice. “Raise a toast to Saint Joe Strummer,” Craig Finn sang on The Hold Steady’s  2008 track “Constructive Summer”, giving voice  to the feelings of many.

Whatever the post-mortem hum that surrounded Strummer, the fact remained that after The Clash’s dismal end – for which he ever blamed himself, repeatedly, at length, especially over drinks – the adoring roar that he had once enjoyed was now silenced. If it was true, as he often said, that The Clash alone gave him purpose, it seemed as plausible that without The Clash he meant surprisingly little to anyone. His fear that his audience was gone was realised when his solo album, Earthquake Weather, was released in September 1989 to poor reviews and disastrous sales. Worldwide, Earthquake Weather sold no more than 7,000 copies. I spoke to him that Christmas. He sounded humiliated, more depressed than ever. What was he going to do now? “Disappear, probably,” he said.

That’s what Joe then did, like he’d evaporated. He later described the following decade as “The Wilderness Years”, a time of creative drought, depression and drugs. “The Wilderness Years”, such as they were, properly began in 1983, when Joe evicted Mick Jones from The Clash. From then, Strummer was apt to drift, project to project, often taking bit parts in films no-one saw for which he wrote a lot of music no-one heard. Anyway, it’s to those years that this expansive collection rather bravely returns us. Up to a point, the anthology makes plausible the view that, however flawed, there was more to the music Strummer made outside The Clash than its commercial reputation allows. CD1 opens with two tracks from Strummer’s pub-rock crew The 101’ers, the band Bernie Rhodes wanted eradicated from Joe’s past. But this is where it started for Joe, right leg pumping at the Charlie Pigdog Club and The Elgin in Ladbroke Grove, unforgettable nights. The following “Love Kills”, a lumpy punk-blues, recorded in 1986 for Alex Cox’s Sid And Nancy, is presumably here because it was the first time Joe had recorded with Mick Jones since The Clash split. Its fierce B-side, “Dum Dum Club”, might have been a better selection.

In 1987, Strummer was in Nicaragua with  a beard and a small role in Walker, Alex Cox’s unhinged satire on American imperialism.  He also composed a fabulous score for the  film, represented here by “Tennessee Rain”,  a campfire sing-along, not entirely typical of the soundtrack. “Trash City”, meanwhile, is a great slutty rocker from the 1988 Keanu Reeves film Permanent Record that introduced Joe to the band he called Latino Rockabilly War, who backed  him on Earthquake Weather. There are two songs from Finnish director Aki Kaurismäki’s 1990  I Hired A Contract Killer, in which Joe again had a minor part. “Burning Lights” is stark, a song about travelling without getting anywhere, a familiar destination for Joe at the time. “Afro-Cuban Be-Bop” is Joe at his dreamiest, with a lovely fluttering vocal and sweet melody. Both tracks were credited to The Astro-Physicians, actually just Joe and a bongo player. Elsewhere, the straining earnestness of “Generations” is in sharp contrast to the uproarious Rick Rubin-produced “It’s A Rockin’ World”, composed for  a South Park episode.

Still-born Earthquake Weather is represented by an affable version of The Tennors’ rocksteady tune “Ride Your Donkey” – mystifyingly when “Leopardskin Limousines”, one of Joe’s greatest songs, was available. After 10 years gulping for air, Joe fully found his voice again on the three terrific records he made between 1999 and 2002 with The Mescaleros (the third, Streetcore, completed after his death). There are no quibbles, minor or otherwise, about tracks included from them, especially valedictory dub epic “Yalla Yalla”. Further highlights of CD1 are two duets – the first, suitably grainy, with Johnny Cash on Bob Marley’s “Redemption Song”, the other with Jimmy Cliff on the rousing “Over The Border” and the sentimental version of “Minstrel Boy”, recorded for Ridley Scott’s gung-ho war film  Black Hawk Down.

CD2 features 12 unreleased tracks, some sourced from newly discovered tapes stashed in Strummer’s ‘archive’ – actually his garden shed, full to the brim with all manner of artefacts. Not all of it’s great. Joe at times was inappropriately convinced he should form a blues trio. On the evidence of lamentable 12-bar slog “32nd Street”, this would have been an even worse idea than sacking Mick from The Clash, notwithstanding the fact Mick plays guitar on the track, an outtake from the Sid And Nancy soundtrack. Country pastiche “2 Bullets”, sung by Pearl Harbour, is from the same undistinguished source. More valuable is the version of a newly written 101’ers barnstormer, “Letsagettabittarockin’”, recorded in 1974 by Joe on a cassette in his room at his old Elgin Avenue squat, and “Czechoslovak Song/Where Is England”, a striking demo of “This Is England”, the only redeemable track from Clash swansong Cut The Crap.

Two tracks come from clearly tentative July 1984 sessions – “Pouring Rain” and “Blues On The River”, both plaintive, the latter with an insinuatingly atmospheric groove. “Pouring Rain” was reworked in 1993, dressed up with flute, accordion, fiddle, saxophone, for the soundtrack of the film When Pigs Fly at sessions featuring jazz-folk bassist Danny Thompson and Rockpile drummer Terry Williams. “When Pigs Fly” itself is lovely, busking pop, Joe sounding attractively weary, like a lot of late nights gathered together. “Rose Of Erin” has a similar Celtic swirl, but Joe’s constrained, a little uptight, like he’s singing conscientiously but without much feeling from a lyric sheet. “The Cool Impossible”, recorded separately with the same musicians, is quietly fantastic, Strummer confident enough to veer off on digressive vocal tangents, his eccentric phrasing dashingly spontaneous. “London Is Burning”, meanwhile, is an early version of Streetcore’s “Burning Streets”, brash in the manner of vintage Clash. But what to make of “US North”, produced by Mick Jones in 1986, a torrent of words delivered with a sort of wan passion over a shunting beat that goes on for 10 life-sapping minutes? You keep waiting for it to find a new gear, take off, any direction a relief from this corseted repetition of droning strings and watery guitar.

Three more tracks come with the vinyl boxset, with much extra paraphernalia. A seven-inch single couples another early demo of “This Is England” with the clanging call-to-arms of 1984 demo “Before We Go Forward”. There’s also, finally, a cassette, a facsimile of one found in Joe’s archive featuring a song called “Full Moon”, a 1975 demo recorded in the basement of 101 Walterton Road, his old Maida Vale squat. It’s enormously touching – Joe at 22, late at night with his guitar, his future unwritten, so much unknown yet to come in the cool impossible.