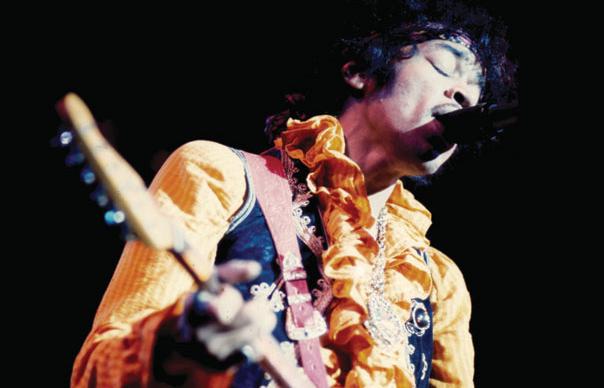 One of the disappointments about All Is By My Side, the forthcoming biopic of Jimi Hendrix is that the Hendrix estate, Experience Hendrix LLC, has denied permission to use any Hendrix music in the film. The implication being, if anyone is going to tell the story of Jimi Hendrix, then it will be them.

Hear My Train A-Comin’ is surely intended as that definitive telling of the story – and since it is supervised by a family member (Hendrix’s half-sister Janie), one hopes it might intimacy, warmth and nuance. As it turns out, the film, while comprehensive, is actually a strange mixture of dryly objective, and plain misleading. The self-evident truth of the artist, which is to say he was a magnificent player and songwriter who needed a good producer; an over-milked cash cow in life; who died a tragic, grubby death is barely touched upon. Hendrix as presented here is never less than gifted, saintly. This, duly, is less documentary than hagiography.

Just as Jimi and his music endure beyond the grave, so do many of the speakers here. Chas Chandler. Noel Redding. Mitch Mitchell. Jimi himself, and his dad, Al Hendrix. All have since departed this earth and most have their comments imported from other documentaries, but all are presented here without indication of when they might have been talking, or to whom. It’s precisely the level of respect for archive material we have come to expect from Experience Hendrix.

Still: kudos for finding Hendrix’ old Harlem girlfriend Fayne Pridgon, getting good stuff from Paul McCartney, and interviewing the fabulous Linda Keith. But while this clearly wants to be the last word on the subject, the film is clearly in hock to other people’s Jimis, leaving little idea of who its own should be. For a man apparently generous to a fault, Hendrix’s authorized documentary is not a film that apportions much credit to anyone else.

As you might hope for from the estate, the true strengths here are archival. There are good snatches of black and white footage capturing the Experience on tour in the UK on the “Bexley Black Prince” circuit, and playing watched by The Beatles at Brian Epstein’s Saville Theatre. The Woodstock formation of Hendrix’s band, never generally given much credit, is at least covered – and deep percussionist Juma Sultan is interviewed. Elsewhere Fayne Pridgon fleetingly alludes to the essentially racist “Wild Man Of Borneo” crap that trumpeted Hendrix’s arrival in the UK.

This – namely, the press story – is a narrative that is less familiar, and might have been profitably explored – especially since both Hendrix’s UK publicist (Keith Altham) and his US counterpart (Michael Goldstein) are lucid good company. Goldstein uncovers a lesser-discussed problem that Hendrix ran up against in the USA: he wouldn’t get played on the radio and the Ed Sullivan show turned him down. Hendrix’s success there was, therefore solely down to live shows and word-of-mouth. Wow! Tell me more! Oh ok, don’t, just tell me some more about how the public showman was a mask for the private person.

Unfortunately, though, for all the wealth of reminiscence available here, this is not a film of great artistry or insight. The narrative will be familiar to anyone who watched then or has seen since the great 1989 South Bank Show film by Barnaby Thompson and Tom McGuinness (from which the extensive Chandler and Redding interviews derive). Likewise many of the interviewees and most touching archive stuff here (Hendrix caught playing the song “Hear My Train A-Comin’” itself) will be known to anyone who saw Joe Boyd’s 1973 film about Hendrix – another talking head doc, just a rather more poetic one. The whole format feels most redolent of the Classic Albums TV franchise – worthy but slightly dull.

In lieu of an original take on Hendrix, this film occasionally offers an arguably fictional one. Hendrix, it says here, was an accomplished parachutist, and a promising military career ended when he broke his foot. Rather than say, an incompetent supply clerk and poor rifleman, ultimately kicked out for masturbating on guard duty. The film states Chas Chandler couldn’t get on with Jimi’s latterday working methods and then plays “1983 (A Merman I Should Turn To Be)” as if to imply Chandler had no understanding of how to produce Hendrix’s psychedelic music, which is laughable for the man behind Are You Experienced? and Axis; Bold As Love. We hear a lot about how Macca got Jimi booked for Monterey, but not a thing about the role of Brian Jones, who introduced him.

Ultimately, this all comes down to what you might call a trust issue. No-one has dug deep here (possibly for fear of what they might find) and as such the Hendrix represented here is more santised, and more one-dimensional than he surely ever was in life. It’s enjoyable to watch, but it’s filled with unfortunate irony. While the claim is made for Hendrix as a revolutionary artist, this is a film all about toeing the party line. For all its strenuous effort to definitively tell his story, meanwhile, this ultimately leaves Hendrix’s truth as elusive as ever.
John Robinson