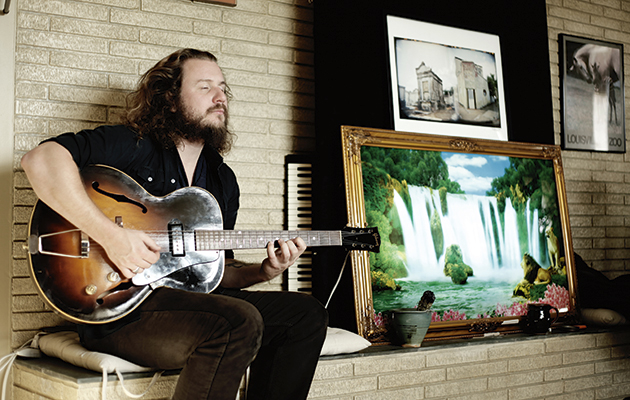 The build-up to the most divisive Presidential Election of modern times has brought with it a number of dissenting musical voices. Rap-rock supergroup Prophets Of Rage were formed with the express intention of confronting “this mountain of election year bullshit”, as guitarist Tom Morello put it. LA rapper/producer Ty Dolla $ign recently issued the pointed Campaign, followed a week later by Drive-By Truckers’ remarkable American Band, which saw the Southern rockers addressing the embattled moral climate of a country that appears to be fighting a war with itself.

The latest artist to lend his shoulder to the issue is Jim James. As locus of My Morning Jacket, James has tended to explore a set of universal themes across the band’s seven studio albums – faith, love, loss, spirituality, the steady roll of time – while 2013’s Regions Of Light And Sound Of God, his first solo effort, felt like a series of cryptic dialogues and private revelations. Eternally Even, by contrast, is much more plain-spoken. These are songs concerned with equality, respect and compassion in the face of ruinous political agendas and institutionalised bigotry, songs that stress the importance of speaking up for what you believe in.

Never is this more keenly expressed than in “Same Old Lie”, a plea for action aimed at a society lulled into apathy. “Now who’s getting cheated out?” he rumbles, “You best believe it’s the silent majority / And if you don’t vote it’s on you, not me”. James’ message is simple: liberty is something you have to fight for. Similarly, “We Ain’t Getting Any Younger Pt.2” stresses the exigency of rebuilding a world shamed by war and blood: “You got the whole wide world / Laid out in front of you / And you can talk about it all you want / But what the fuck you gonna do?” It’s not exactly a call to revolution, but it does serve as a reminder that destiny isn’t necessarily preordained.

James isn’t too heavy on specifics. Eternally Even may be blistered with references to hate crimes, guns and lives in rubble, yet he doesn’t waste his energies on obvious targets. Rather, he appears more interested in suggesting a way out of the malaise, a spiritual deliverance that can only be achieved by uniting with one another.

If this sounds overly simplistic, that’s because it is. But James makes his case so seductively musical that it’s hard to dismiss such bright-eyed optimism. The album is motored by languid grooves and an esoteric kind of cosmic soul, his low-key vocals smoothing the way. Unlike Regions Of Light… or much of his My Morning Jacket work, there’s little evidence of James’ arching falsetto here. He and co-producer Blake Mills – whose recent endeavours include Alabama Shakes’ Sound & Colour, Brittany Howard’s solo LP and Dawes’ We’re All Gonna Die – instead opt to place more emphasis on buzzing electronic drones and curious, faintly psychedelic textures.

As such, Eternally Even feels like a protest album by stealth, its raw polemic softened by cool rhythms and beguiling motifs. It’s tempting to draw parallels with certain socio-political soul albums from bygone eras, mostly explicitly early ‘70s classics like What’s Going On, Curtis or Lou Rawls’ vastly underrated A Man Of Value. Yet its musical tone also aligns James to the slanted R&B of modern-day adventurers like Frank Ocean, Matthew E. White and Tame Impala.

Help is plentiful. Whereas Regions Of Light… was almost entirely a solo piece, Eternally Even features a number of guests, among them veteran drummer Jim Keltner, New Orleans saxophonist Charlie Gabriel and sweet-toned backing vocalist Shungudzo Kuyimba. This more expansive approach is typified by “True Nature”, its great jazzy intro stepping aside for funkified R&B. Or “In The Moment”, whose zesty euphoria suddenly slows to a near-halt, before being picked up by silky brass and popping bass licks. The trippily soulful “Same Old Lie” shares the same busy vitality, with itchy percussion and an Eastern-scented coda.

Much like its impressive predecessor, Eternally Even affords James the opportunity to take his music to places that My Morning Jacket are less likely to inhabit. The result being that his solo albums are rapidly becoming profound statements in themselves, rather than mere sideshows to the main event.

Q&A
Jim James
Had you been planning to make this record for some time?
This album was strange in that I didn’t set out to write it. It all started with improv pieces where I was playing the organ and Brian Reitzell was on drums. We were working on scoring films and got fired for being too weird! But I loved a lot of the music and it resurfaced. When I met Shun [Shungudzo Kuyimba] I felt like her voice became a beautiful connecting line across the record. Somehow it just kept collecting more and more beautiful souls.

The tone of Eternally Even recalls protest-soul albums from the past, from Marvin Gaye to Curtis Mayfield…
Curtis Mayfield is like the Buddha. I feel like his spirit always seeps into my work and is what I aspire to be: music that moves you emotionally, but hopefully inspires equality and peace and love. Yes, things are fucked up. It may sound naïve, but I really do believe we still have a chance to turn the ship around. It’s possible to change the world for the better, but not unless we speak out, vote and demand change.

Do you dare contemplate Trump as President?
It makes me cry to even think of a racist, sexist bully like Trump becoming President. How have things gotten so bad? All we can do is work, pray and speak out in hope that Trump will soon be long forgotten. Like a bad joke.
INTERVIEW; ROB HUGHES