More songs about narcissism and death 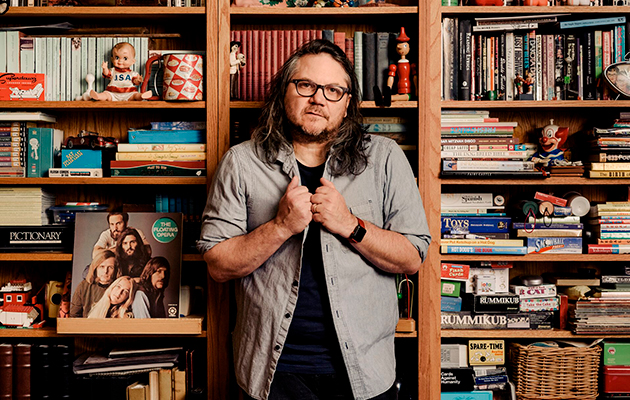 Unusually, for a rock’n’roll record, Warm comes with sleevenotes by a winner of the Man Booker prize. George Saunders, the author of Lincoln In The Bardo and a contributor to The New Yorker’s Shouts & Murmurs, suggests that Warm “is one of the most joyful, celebratory, infectious collections of songs” the author has heard in a while. There are, of course, qualifications alongside this claim; a huge falling piano labelled “Death” is mentioned – but it still seems surprising. This joy, this celebration, this infection: what does it sound like when delivered by Jeff Tweedy?

It sounds pretty much as you’d expect from following Tweedy’s recent extra-curricular output. Within Wilco, Tweedy’s tunes are probed and caressed, scratched and sugared by a band who all bring their own flavours of creative tension to the studio. Working on his own, Tweedy favours a more skeletal architecture. You can hear the difference on 2017’s Together At Last, a much underrated record: with the songs shorn of their Wilco arrangements, the understated beauty of the singer’s songwriting is revealed. Or, perhaps more relevant here, recording as Tweedy on 2014’s Sukierae, Jeff and his son Spencer combined to under-colour the songs, many of which ruminated on mortality and love. That record could have made its point more forcefully – musically, there were trailing wires everywhere – except that its point was uncertainty.

So, Warm. Not hot, not cold. The album’s title comes from the penultimate song, “Warm (When The Sun Has Died)”. It’s a delicate thing with a glint of steel in the guitars. The words are pared so that only the poetry remains. What you get first is the sadness, then the resilience. There are two verses, and Tweedy doesn’t so much sing the lines as sigh them. It is a song about death, and while the identity of the narrator is obscured, it can be viewed as the last testament of a dying man. “Please take my advice,” he says. “Worry into your song/Grow away from your anger/Distance belongs.” The warmth of the title is a fading remnant of life. “I don’t believe in heaven,” says the narrator in the concluding verse. “I keep some heat inside/Like a red brick in the summer/Warm when the sun has died.”

There is a danger, always, in assuming that songs are autobiographical. With Warm, it’s hard to think anything else. The record was written while Tweedy was working on his book, at a time when questions of mortality were crashing into his life. The illness of his wife Sue was the inspiration for Sukierae, though the death of Jeff’s older brother Greg in 2013 must also have cast its shadow. The passing in 2017 of Tweedy’s father Robert is clearly significant on both a human and an artistic level. The playful sounding “Don’t Forget” brings mention of a funeral (“sweating in a new suit”), but the song’s viewpoint also swirls through the generations as it celebrates resilience and familial DNA. Also, if you listen to it twice, it reveals itself as a passionate love song, for a father from a son, to a son from a father.

There are occasional breaks from this mood of sombre resilience. “Let’s Go Rain” is a John Lennon-ish reworking of the story of Noah’s Ark, in which Tweedy, the agnostic, looks to the heavens for a flood, before concluding that rock’n’roll – an “ocean of guitars”, sometimes played by Scott McCaughey – is that purifying rain.
But then again, regrets. Jeff has a few. The big song on the record, the tune that holds the thing together, is the gorgeous lament “Having Been Is No Way To Be” (possibly the ultimate Tweedy title, being both sad and unsentimental, reflecting a song that is sorry and unapologetic, gnarly and tender). Tweedy says of this song that it is “probably autobiographical”, which is almost right. It reads – more than it sounds – like the night-sweats of a man analysing the worth of his opinions, and deciding what story he wants to tell about himself. It is, Tweedy says, “as direct as I’m able to get. That may be the limits of my ability to empathise with myself.”

So, joy? Well, maybe, if you take joy  and interrogate it to the point where it forgets how to dance. Warm is something else, tougher, but no less valuable. It’s a tender manifesto of self-doubt, a shout fading into a murmur. It goes out as it comes in, with the singer lost in a dark mantra. “I don’t know,” he sings, sounding just about OK with that.