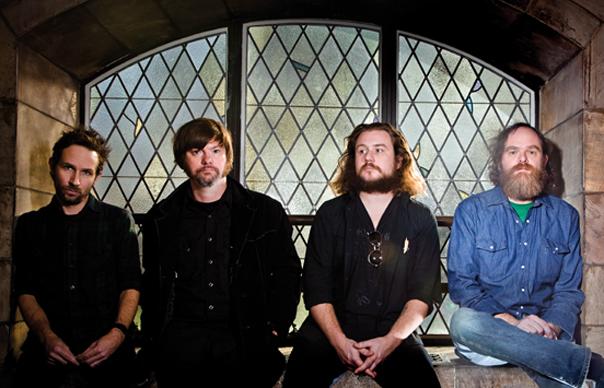 Huntington’s disease began its slow, remorseless work of destroying Woody Guthrie physically and mentally, in the late 1940s, just prior to the advent of the technology that might have permitted the capture of definitive, more or less modern-sounding versions of his songs. However, the fact that Guthrie’s original canon exists primarily as scratchy, lo-fi, live-to-tape performance – and unrecorded, unfinished scrawlings in notebooks – has kind of worked to its benefit, permitting uncountable successors the space to rework and interpret.

Farrar, Johnson, Parker and Yames indisputably possess the necessary qualifications. Their combined histories in Son Volt, Gob Iron, Uncle Tupelo, Centro-matic and My Morning Jacket were at least sufficient to impress Nora Guthrie, Woody’s daughter and the custodian of his archives, who allowed the quartet to fossick through her father’s scrapbooks in search of snippets worth vivifying.

New Multitudes is scarcely the first such project. Billy Bragg and Wilco (alma mater of Farrar’s former Uncle Tupelo compadre Jeff Tweedy) recorded two sets of previously unheard Guthrie lyrics under the Mermaid Avenue marque. Jonatha Brooke did something similar with The Works, The Klezmatics on Wonder Wheel and Happy Joyous Hanukkah. All faced the same challenge – that of paying due respect to a titanic figure while summoning the nerve to stamp their own mark on the material. Farrar, Johnson, Parker and Yames manage this with almost supernatural ease, though this may say at least as much about the adaptability and accessibility of Guthrie’s writing as it does about them.

There are twelve tracks on New Multitudes (and a further eleven on a bonus disc issued with the limited edition). In no case have messrs Farrar, Johnson, Parker and Yames done the easy and obvious thing (ersatz campfire singalong) or the obtuse and perverse thing (attempting to haul Guthrie’s words beyond their natural milieu of recognisable Americana). Opening track “Hoping Machine”, indeed, is irresistibly evocative of Uncle Tupelo at their more stately, Farrar lending a song of optimism-despite-it-all (“Don’t let any earthly calamity knock your dreamer and your hoping machine”) an appropriately striving melody and hesitant arrangement.

The four collaborators split lead vocal duties equally. In general, Farrar’s songs tend toward the gently pugnacious, Johnson’s to the sombre and guttural, Parker’s to amiably ragged country rock, Yames’ to ambitious excursions to the edge of where Guthrie’s songs might feel comfortable (“Changing World” is rendered as a punky, snotty lament that sounds curiously, and curiously aptly, like Wreckless Eric, while “My Revolutionary Mind” is a string-soaked torch ballad that builds to a cacophonous climax before cutting out with a suddenness unrivalled since Dinosaur Jr’s “Just Like Heaven”).

Inevitably, “New Multitudes” is essentially an exercise in imagining how these songs might have sounded had their author lived long enough to record them. It says much for the chops and the passion brought to the project by the quartet, that Woody Guthrie also becomes plausibly a Slobberbone-style alt.country snarler (Johnson’s “VD City”), a Jackson Browne-variety west coast balladeer (Parker’s “Fly High”), a swaggering Tom Petty-ish southern rocker (Parker’s “Angel’s Blues”), or a reverent dustblown roots crooner very much in the vein of, funnily enough, Son Volt (Farrar’s closing title track).

Any approach of Guthrie’s legacy is a step into a long, dark shadow – he is, along with his approximate contemporaries Robert Johnson and Hank Williams, no more or less than a founding father of modern American popular song. But his work endures because of its essential big-hearted hospitality – and Farrar, Johnson, Parker and Yames have made themselves right at home.


Q&A
Jay Farrar
How would you quantify the continuing influence of Guthrie on American music?
Woody seems to be that elemental source that had a ripple effect on American music. The ethos and musical aesthetic of Woody influenced the folk movement of the 1950s, which in turn inspired Bob Dylan. Woody might not have been the first person to write protest songs but he did show that music can have a powerful effect for generations down the line. There is a timeless message in Woody¹s music. When Woody didn’t like the status quo he wrote a song with the intent to change the status quo.
Andrew Mueller

How intimidating ­ or otherwise ­ is the task of writing music for Guthrie’s lyrics?
Maybe the initial walk up the steps to the archives was intimidating, but after finding inspiration in Woody¹s philosophy and work ethic, the music seemed to already be written. A connection would jump out with a certain set of lyrics or notes and the music would just be there.

How much unused Guthrie stuff is still awaiting examination?
Woody was prolific in a way that all writers can aspire to. Will, Anders,
Jim and I only made it through a fraction of the material at the archives.
The archives are ready for the next in line.

How did you go about reconciling the influences and ideas of the four
contributors?
There was never any master plan and this project came to fruition through happenstance and visceral propulsion. From the start it seemed an approach that didn¹t focus on any singular theme or sound would be the best. There is a breadth and scope to Woody¹s artwork and songs that was apparent after visiting the archives. Woody wasn¹t afraid to tackle any subject from STDs to prostitution to street drugs. I guess our job here, which we found along the way, was to show another side of Woody Guthrie.
Interview by Andrew Mueller